Among the families of the birds, there are some that stand out for their majesty, especially for their large size. This is the case of the albatross, one of the largest birds in existence.

What is an albatross?

Albatrosses are part of the order of the procellariiformes, and are known by the scientific name of Diomedeidae. They are in the same group as procelariids, hydrobates and peelechanoids.

They generally measure between 1 and 1.5 metres in length and weigh more than 8 kilograms. But what makes them really huge is when they spread their wings, as they can reach a wingspan of more than three metres, the largest of all birds.

Can you have a domestic albatross?

Because of the size of this bird it would be impossible to have it as a domestic bird. In addition, it is a species that is accustomed to living near the edges of the cliffs or inside cracks in them.

The only people who have had an albatross as a bird during the time it has been cured by injury or injury have said that it is very difficult to care for and maintain it.

How many species of albatross are there?

There are currently believed to be between 13 and 24 species of albatross, a number that is still under discussion. These species are divided into four genera:

Experts consider the Phoebastrial albatross to be a heralded taxon of the Thalassarche, which is why they are generally placed in the same group.

According to the IUCN Red List, there are currently 8 vulnerable species, 6 endangered and 3 critically endangered.

How long does an albatross live?

The truth is that they have a fairly long life expectancy, although this is determined by where they live.

As a rule, albatrosses have an average life expectancy of 35-42 years, although there have been cases of some members reaching 50 years. However, they usually die between the ages of 10-15.

Where are they distributed?

Albatrosses are a fairly widespread species, but scientists have conducted significant data collection through satellite tracking. Thanks to this research, it has been determined that they do not travel or migrate annually, but they do disperse after the breeding season.

Evidence has been obtained of the separation of the separation between different species. This is also due to their behaviour. For example, the waved albatross feeds on waters deeper than 1000 metres, while the Tristan albatross breeds on Gough Island and travels westward while females travel eastward.

What does an albatross eat?

Most albatross feed consists of cephalopods, fish and crustaceans, but they can also be scavengers and feed on meat or other chicks. They supplement their diet with zooplankton.

However, there is some difference between the feeding of one species and another. The black-footed albatross feeds on fish, while the Laysan albatross catches squid.

Their eating habits seem to be mostly diurnal. In addition, several investigations obtained from the remains left over from squid regurgitated by the albatross were too large to ingest. This could indicate that albatrosses take advantage of human fishing to catch squid that are distracted or have died during the fishing process but have been thrown back into the sea.

How does an albatross reproduce?

The albatross species is quite a colony, and tend to nest on remote islands. They use territories of a continental character, with good access to the sea in several directions, as in the Otago Peninsula in Dunedin (New Zealand). Some nest in the open, but others nest under trees, such as grey albatross.

As with many seabird species, albatrosses follow the’K’ strategy for their life cycle. This means a low birth rate that is compensated by a high longevity, delaying the time of procreation and investing less effort in the offspring.

An adult albatross reaches sexual maturity once it has reached five years of age, but this does not mean that it has already joined a pair to reproduce. In fact, they may not do so until they are 10 years old. Once a pair has been established, it will last a lifetime, because albatrosses are a monogamous species, like swans. The younger specimens join the colony, dedicating themselves to practicing the mating rituals and dances of this bird family.

To build the nest, the albatross use grass, shrubs, soil, peat and penguin feathers, although specimens living in the Pacific use elements to build a more rudimentary nest. The Galapagos albatross is the one with the most curious behaviour in this respect, as it moves the egg throughout the breeding territory, sometimes even over distances of up to 50 metres, which causes the loss of eggs.

The incubation process is carried out by both parents, a process that can last between 70-80 days (a little longer in the case of larger specimens). After hatching, the young will be protected for three weeks until they are large enough to defend themselves and thermoregulate themselves. During this time it is the parents who feed the chick by regurgitating the food in its beak.

The young of this species take a long time to feather. Large albatrosses, for example, can take up to 280 days, while smaller ones can take between 140-170 days. The albatross pups will gain considerable weight in order to use these reserves to increase their body condition and develop growth. They feather themselves and receive no additional help from parents. They will return to the nest once they are fully plumed.

The albatross and the human being

The fact is that the albatross has been quite a famous bird in popular culture, and describes it as the most legendary of all birds. It is the central axis of Samuel Taylor Coleridge’s Rime of the Ancient Mariner, as well as a captive albatross is the metaphor used for the poem The Albatross by Charles Baudelaire.

In the past, Maori used wing bones to carve ceremonial tattoos on their skin, as well as to carve flutes. These birds are appreciated and loved by all ornithology lovers. In fact, their colonies are a very popular destination for ecotourism. 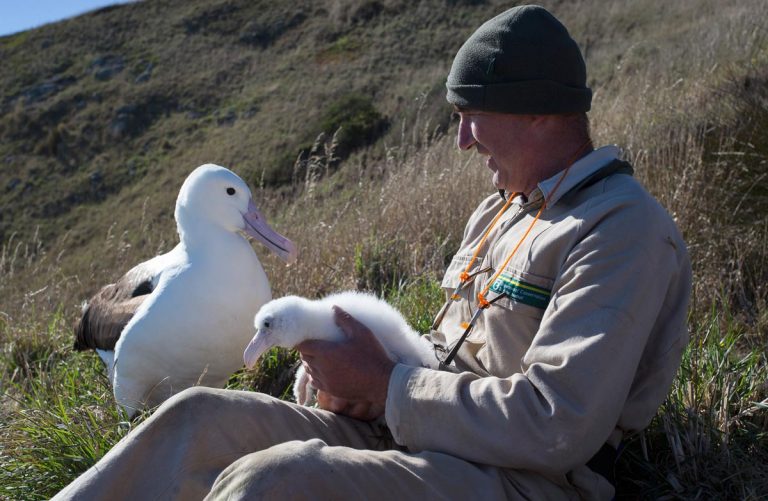 Villages such as Monterey, Kaikora, Wollongongong or Sydney have made regular pelagic seabird watching trips. Since these boats release fish oil into the sea during their voyage, this attracts albatrosses.

One of the most popular albatross colonies to visit is in Taiaroa Head, New Zealand, where there is a northern royal albatross colony. It attracts up to 40,000 visitors a year. If a colony is isolated, cruise ships are used to attract ecotourism.

It is a highly endangered species

The fact that the albatross species is widespread does not mean that they are not at high risk and have many threats around them. One of them, and the worst, is commercial longline fishing. Albatrosses, as well as other seabirds, feed on offal and are attracted by longline bait, hook on lines and drown. The estimate is a total of 100,000 albatrosses a year that die from this system of illegal fishing by unscrupulous pirates and fishermen and respect for these birds.

And in any case, could an albatross ever die from a collision with a plane? Of course I do, and there have been many cases. One of the most notorious was on Midway Atoll, where the collision of Laysan albatrosses with aircraft has caused the death of humans and quite a few interruptions in military flight operations.

In order to prevent such accidents, the results of the establishment of various control systems were examined in 1950 and early 1960, as well as the destruction of bird nesting sites, the hunting of birds and the cleaning of the ground to eliminate the upwelling currents used by these birds. Thus, the elevated structures killed more than 3,000 birds in flight collisions between 1964-1965 before the height of the towers was reduced.

Although it was not the main cause of their closure, finally in 1993, when the naval aviation facilities on the Midway Islands closed their doors, the death of these birds from aircraft collisions was ended, which has helped to reduce the number of deaths. However, the introduction of some predators and lead paint contamination continue to kill thousands of birds each year. In fact, in Midway they were heavily hunted in the twentieth century because their feathers were very popular, resulting in the death of more than 300,000 specimens.

The albatross may be a large bird, but it can do nothing against a predator with claws. The introduction of wild rats and cats, which especially attack young and eggs, has made the growth of the species quite slow. On the island of Gough, home to one of the world’s largest seabird colonies, the young Tristan albatross nesting on the island are attacked by the domestic mice that entered the island. But predators aren’t the only problems for albatrosses. An introduced livestock animal destroys the grass cover, as well as the introduction of some plants other than those on the island reduces the habitat they may have for nesting.

Feeding is also a risk for these birds. Many of them confuse floating plastic waste with food, and since the amount of plastic in the seas has increased dramatically over the past 50 years, it is very dangerous for birds. For an albatross, plastic is impossible to digest and occupies a space in the stomach that would have to be used for food. In addition, it can cause obstruction that would prevent the bird from eating.

Sometimes, and this worried the experts a lot, this plastic is regurgitated and used to feed the young. In the Midway Islands, large amounts of plastic were found ingested from the dead calves of natural matera.

Any curiosity about the species?

You know that the albatross is a monogamous species that is at great risk to humans and can fly for hundreds of miles. But would you like to know more about this species?

Albatrosses are able to fly for hundreds of miles without a single flutter, a feat that no other flying creature has achieved. This is possible thanks to the fact that during their travels they spend most of their time facing the wind and they take advantage of this to ascend. Then they go back down to the ocean. Thanks to this technique they can cover huge distances with very little effort. A technique that engineers want to imitate in order to develop more efficient aircraft.

Seabirds generally do not have a very good sense of smell. However, in the case of the albatross, it has a unique sense of smell to locate its prey. In fact, they can do it up to 12 miles away.

They have a rather curious behavior with the sunfish species, known as mola mola. Due to its large size, many crustaceans and parasites usually stick to the skin of this fish. But Laysan’s albatross is chased and ripped from its skin by crustaceans, so it’s as if they’re cleaning its body.

Who has it been that in the animal world no homosexual couples are formed? In fact, 31% of Laysan albatross pairs on the island of Hawaii of Oahu are female.