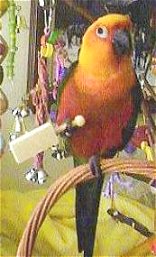 Colorful, cuddly and playful are the Jendaya Conures, called Jenday and also Janday by many folks. This is a picture of my Jenday, Angel, holding his toy bat.Jenday Conures are close kin to the Sun Conure in coloring, size and temperament. Both being aratinga conures, they have the charming personality, sweet dispositions and the characteristic loud, shrill cry associated with this family of small South American Parrots. Angel is a large male Jenday, weighing 135 grams.

Angel the Jenday claimed my heart 4 years ago as a baby of only 11 weeks old. My handfeeding experience with wild birds was extensive and I confidently took him home to wean out as slowly as he wanted. Unless one has lots of experience hand feeding birds, it is best to let the breeder or other professionals wean the conure or any parrot. 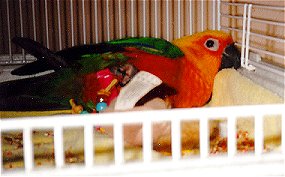 The best advice I got when I first bonded with Angel was to hold him a lot, and I mean a lot. Several people told me to hold him at least an hour each day and cuddle him. To take hand toys to my lap with him for him to play around there. I held Angel the Jenday as much as I could. I credit this early gentling time spent with me with producing a very sweet, tame and loyal conure companion.

Many conures are considered to be hardy, healthy companion parrots. Angel is athletic, playful and very alert to his surroundings. He likes to play laying on his side on a towel on the floor of his cage. (as shown in picture) In recent years he has demonstrated a preference for sitting on my knee while having his head preened. Countless smacky kisses are sent me every night from my very bonded conure. Little growls and soft chirps are also freely given to demonstrate his affection for me. 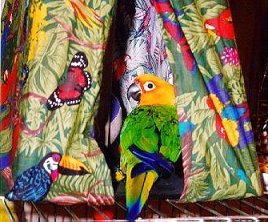 Angel loves his toys and his “possessions.” His tent shown in this photo of him is a real favorite of his. He takes his small foot toys into the tent, arranges them, plays with them, brings them outside the tent, and then back inside again. (Picture of Angel and his Hide and Sleep Tent.)

As a baby bird, I taught him to “step up” to a hand towel over my hand. As he matured, he has been through several stages of extreme territorial behavior. These stages were characterized by jumping on the side of his cage puffed and with fire in his eyes to defend his territory against any who dared intrude his space. By putting the towel over my hand, I have been able to easily and successfully remove him from his cage and keep him very tame even during these hormonally related periods. Angel steps right up to the towel, although biting it hard when he has the territorial urges. By taking him to another room away from his cage, he relaxes and plays.

He is possessive of his toys. Everyday he makes a complete round of his cage toys ringing every bell, bonking every wooden toy and rattling all the chain toys. Bells are among his favorite things.

Jenday conures are not supposed to have the small darkish ends to their feathers you see on Angel’s wings and back. That is where the green color has been rubbed away by toys dangling and touching him. He likes to sleep with toys touching him, probably for security. Check with your Vet if you see this coloration pattern as there is a fungus that can cause a similar coloration pattern.

Some male Jendays develop a broad chest like Angel’s. Not overweight, he looks well-nourished and well-groomed in physique.

Angel is typically much braver than his size dictates. He will try to attack larger parrots, cats and dogs. For his safety, he is not permitted to be outside his cage when my larger parrots are. Also for his safety, he only goes outside in a small carrier. His light body weight lends him to easy lifting by the wind, even with his flight feathers trimmed. One mistake I made raising him was not putting him into a harness and leash as a small baby bird and teaching him to like it since it means going outside and having fun. As an adult conure, he refuses my efforts to harness him.

Another mistake I made raising my Jenday Conure was to put him back in his cage when he was a juvenile and went through his stage of nipping. This method is called “time out” and was the popular choice at that time. 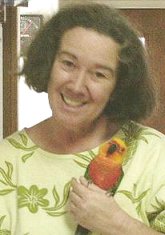 I accidentally taught Angel to bite me when he was tired of playing and wanted to go back to his cage. With my later parrots, I always end every interactive session with me on a positive note. The easiest instant fun thing handy is to take the bird to see the one in the mirror which is a great way for me to end the sessions. The customary nipping stage is met with by teaching the bird to be gentle with me. I stroke their beak and say “gentle.” I sing soft songs to soothe them when they go through this period in their development. I tell them good bird and All right a lot as these are words they love to hear. When they are nippy they do not hear those words they long for.

My Jenday sometimes bites, he can scream in a shrill pitch so I would never move him to an apartment, and he is a one-person bird. I work with these problems and don’t let them obscure what a devoted and precious companion he is to me. After all, Angel is one cute parrot. (Picture of Angel rocked back on my chest in a position he loves.)

The Jenday Conure has a life expectancy of 20-25 years. Many parrots meet early deaths due to accidents or illnesses. I have known a lot of Jenday owners. Most Jendays do not talk that I know. Of the ones that do speak, they speak so rarely that the owner always stops and thinks, “did I hear that?” My Jenday speaks about 5 times annually and his vocabulary is 6 words.