Megabacteria is a large gram positive rod shaped organism that causes severe debilitating disease in numerous species of psittacines and passerines in captivity and in the wild. A detailed description of this disease and it causes, can be found in Avian Gastric Yeast Formerly Megabacteria Part I. 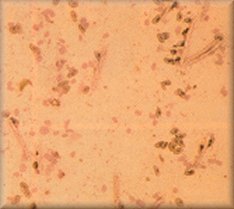 Transmission of Avian Gastric Yeast (formerly known as Megabacteriosis) is by infected feces. Courtship feeding may also be responsible for spreading the organism, as it is found in the digestive tract.

Many budgies (and probably other species as well) have the organism, yet show no signs of disease. These carrier birds may be responsible for spreading the organism.

Diagnosis of Avian Gastric Yeast may be difficult. Radiology using a contrast dye such as barium may show an enlarged and dilated proventriculus (glandular stomach). Other diseases such as Proventricular Dilitation or Wasting Disease may also present with an enlarged proventriculus.

Crop wash, crop smears, and proventricular washes may help demonstrate the presence of the organism. Examination of fresh feces or fecal smears under a microscope may also help make the diagnosis.

Avian Gastric Yeast is a large rod shaped gram positive staining organism. It is much larger than other organisms that may be present in the digestive tract of birds.

Antifungal drugs such as Amphoteracin B and Diflucan seem to be very effective in eliminating the organisim. The best way to administer these is to give them directly in the beak. Medicating the drinking water may not be as successful because budgies can go for long periods of time without water. Amphoteracin given for a ten day period seems to be a very effective treatment.

Since Megabacteria is believed to be spread through the feces, good sanitation is very important in trying to eradicate the organism. Waterers and feeders should be kept very clean and without fecal contamination. Screening new birds before adding them to a flock may also help decrease the incidence of Avian Gastric Yeast. If the organism is found to be present – individually treating the birds, rather than general flock medication, is the best way.