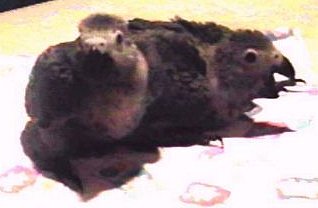 Birds have a population of bacteria known as ‘normal microbial flora’ which colonizes the skin and mucous membranes of the respiratory and gastrointestinal tract. These bacteria are not disease causing and are referred to as ‘nonpathogenic’.Bacteria may be classified as ‘gram-positive’ or ‘gram-negative’ based upon certain staining characterisitics. Gram-positive bacteria are the predominant normal inhabitants of the crop, cloaca, skin and respiratory tract of clinically healthy passerines (finches, canaries) and psittacines (parrots). Lactobacillus, Bacillus, Corynebacterium, Staphlococcus, Streptococcus and Enterococcus are normal gram-positive bacteria in birds.

Gram-negative bacteria may be present in very low numbers in clinically normal birds. When present in large numbers however, they are frequently associated with disease. Enterobacter, Escherichia coli, Proteus, Klebsiella and Pseudomonas are disease causing gram negative bacteria.

Pet bird eggs and chicks are sterile. Bacteria can invade the egg as it passes through the reproductive tract, or as it cools once it is outside the hen’s body. Embryonic death may occur once the egg has been penetrated by bacteria. Bacterial infections may also result in small, weak chicks that fail to thrive or die shortly after hatching.

Once chicks hatch, they are exposed to bacteria from their parents, nest mates, nesting material, food, water, feeding utensils and human hands. Some bacteria also enter through the cloaca (vent).

Baby birds may have crops that empty very slowly, poor feeding responses, and be weak and lethargic if they have heavy gram-negative infections. (Note: Viral infections, yeast infections and inappropriate environment may also be involved.)

If a bacterial infection is suspected, or if a bird is presented for a healthy examination, cultures of the crop and cloaca should be taken. It is important that an antibiotic sensitivity is also performed, so that the appropriate antibiotic may be chosen. Guessing results in choosing an antibiotic that may be ineffective towards the organism that is causing the disease.

A ‘normal’ looking bird may become ill if it has gram-negative bacteria and is stressed as a result of poor nutrition, traveling or other illness. Birds used as breeding birds should have cultures taken before they are set up to breed. This will help contribute to healthy chicks that do not have gram-negative infections.