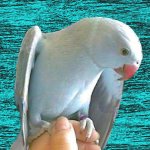 I’ve been breeding Indian Ringnecks for 13 years, and I find them a very easy bird to breed…they are normally excellent eaters, eating anything and everything you give them. They love fresh vegies and fruit and devour them…even orange peels seem to disappear! Give them a Pomegranate and try to find any of it later, other than red juice marks everywhere, so you think one of your birds is bleeding to death! They love the mixture I give them of frozen mixed vegies with cooked pigeon mix, rice and pasta. They also enjoy eating different brands of pellets.I find that Ringnecks are normally marvelous parents…occasionally they will desert their eggs, and occasionally they will kill their babies…like most birds, for some reason or other. But, that does not mean they will do that the next time, so be sure to give them a chance.

Most of my nest boxes are approximately 10″ x 10″ by about 20″ or more deep. However, some of my pairs have produced in different boxes, from a large boot type box (previously used by African Greys) to an Amazon box. They are not fussy…but like it to be deep enough to feel secure…and you need to put lots of nesting materials in for them to throw out! They seem to relish digging in their box to see how deep they can go.

Most of my Ringneck aviaries measure 3 x 8 x 6 high and 3 x 10 x 6 high. All are side by side with other Ringnecks, but we have them double wired so they cannot bite off toes. Occasionally you’ll hear them arguing with their neighbors, especially just before and during breeding season. Each flight has an area to the back, where the nest box is located, that gives them privacy for eating, breeding, etc. All are walk-in flights, and they are used to us walking in to feed, water, clean, and to check out the nest boxes and pull the babies. Some of the younger birds will land on us, or hang nearby waiting for us to give them a treat. 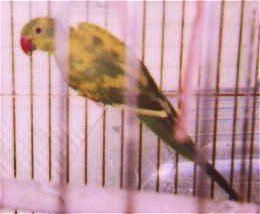 Females are normally the “boss”, and most of the year “have a headache”, until breeding season. If the female does not like the male you give her, she may kill him. My advice is to watch them carefully, and if she chases him, clip some of her flight feathers, so she can’t catch the male. If you are unable to keep a close eye on them, clip her wings anyway, just to be safe. This allows him to get away when she is angry. When breeding season comes along she will probably accept him and raise babies for you anyway.I have found, many times, that pairs will not breed when they are a different color. This is usually because they have never been around a bird of that particular color. When I raise them myself, the youngsters are all put into two large flights…males in one flight, females in another. All the colors are mixed together. These birds will easily accept a mate of any color they are used to being with. But, for example, put a blue with a lutino, neither having ever been with a bird of this color, and you may be wasting your time. Many times they will not breed.

I have been told, and read many times, that Ringnecks never bond. My experience has been that this is not always true. I have some pairs very well bonded that sleep together, eat together and preen each other year round. Others don’t have anything to do with each other until breeding season. They are all individuals, and have their own individual personality.

Some Indian Ringneck males will ring out prior to age 2, however, contrary to popular belief, that does not always mean they have reached sexual maturity. Some males will not fertilize eggs until ages 3 and 4, while some will at age 1-1/2. Females, on the other hand, reach sexual maturity much earlier, and can sometimes be bred as early as 1 year. I do not breed my females before their second year however, as I believe you get a much healthier hen by waiting until she is 2 years old. I also believe this lessens the probability of the hen getting eggbound the first time she lays.

The breeding season depends on what part of the country you are in. I’m in Arizona, and my Ringnecks begin working the nest box in December, laying their first eggs in late January or in February. If the babies are pulled early (the entire clutch by the time the oldest baby is 2 weeks of age) there is a pretty good chance you will get a second clutch. Then they are finished until the following breeding season. Many new, young pairs, will normally only have 1 clutch their first year…so it’s a good idea to leave them in the nest longer, and let the parents learn how to be good parents! Once you pull babies at a young age, many Ringneck parents will pluck their babies if you try to leave them in the nest longer, as they figure it’s past time for the babies to leave.

When I began raising Ringnecks I was told that you had to pull all the babies before their eyes were open in order for them to make good pets. Not so…I have since sometimes left them in the nest up to 4 weeks when I got too busy…and they still handfed out nicely and were really sweet, as long as they are handled regularly.

Ringneck juveniles usually go into a “bluffing” stage sometime during their first year…attacking you, making you think they have gone wild. If you just ignore this, and pretend nothing has changed, they will get over it and return to being a pet. They are highly intelligent, extremely beautiful, elegant birds, and some can be fantastic talkers. I’ve known of one who talked more than African Greys in the same room! It’s important to talk to pet birds if you want them to learn to talk. Repeat certain words until they learn them, then try new ones.

I don’t think male or female makes any difference as far as being a pet. I’ ve had both, and seen others belonging to different people and both males and females have been wonderful pets, but they do need lots of attention. You can’t ignore them for a long period of time and expect them to accept you back “with open arms”! Handle them for a little while each day…they will love you for it!

I hope this information helps those of you who are just beginning to raise Ringnecks. I know those of you who have been raising them for some time know all this, and probably disagree with me on some of the above issues, as you probably have had different experiences. The main thing is to remember that everything you hear and read, is one person’s opinion, as the above is mine.

Enjoy your Indian Ringnecks and other Asiatics…they are marvelous birds!