With a scientific name like Nymphicus hollandicus, it’s hard to imagine the wonderful personalities these little characters called Cockatiels possess. They can rival the antics of parrots much larger than themselves, including their larger cousins, the cockatoos. They can smoothly charm you into almost anything if the mood so strikes them.

And…. breeders of these little cuties have added new dimensions to the ways they can catch your eye. Cockatiels now grace our world with many beautiful color mutations which are a far departure from the original, but still beautiful, Grey cockatiel.

At present, you can find cockatiels in an assortment of colors ranging from the normal Grey, to yellow, white, soft cocoa brown (cinnamon), pastel tan (fallow) and silver. Some breeders are even working on green mutations.

Cockatiels may have normal markings or be pearl, pied, totally white or be in combinations like pearl pied. They can possess yellow, orange, pale peach (as in pastelface), Grey, soft brown or white cheek patches.

They even come in combinations like cinnamon pearl pied whitefaces. These are mainly white with a soft cocoa brown color in their wings and in patches on their bodies. The patches have a lacy pattern, referred to as pearl markings. The females of this mutation normally have soft brown cheek patches (sometimes barely visible) while the males have all white faces with no other color to their cheeks.

The females in all of the mutations normally retain their cheek patches (which are generally lighter than those of their male counterparts). In the lutino whiteface (a.k.a. albino) and the whiteface males, the cheek patch is missing totally.

Cockatiels average about 14 inches in length and weigh from around 75 grams (very small) to well over 120 grams (some show birds weigh closer to 200 grams). If you want the larger birds, you will generally have to purchase them from a breeder.

Cockatiels have been known to live around 30 years if provided with a healthy diet. I personally know of cockatiels that are in their mid twenties. Unfortunately, many are given a poor diet of mainly seeds and don’t live past the age of 15 years.

Cockatiels in their Natural Habitat

Wild cockatiels are found throughout Australia except in Tasmania, more heavily in the eastern regions and mostly in the drier inlands, away from the coastal areas.

These birds were known by other names as far back as 1770, when they were reported by persons who sailed with Captain Cook. They were given the name Nymphicus in 1832. Cockatiels were brought into England and Europe during expeditions around this time period. Although some differences have been noted in the geographical populations, there are no subspecies of cockatiels

Most wild cockatiels are found in groups and prefer living in dead tree branches. They are found near rivers, streams and creeks and their movement as flocks is controlled by the availability of water. I believe they use the streams for both bathing and drinking since most cockatiels love baths.

Wild cockatiels are ground feeders and normally feed on seeds, grasses, leaves and bark (from trees, bushes, and other vegetation). Additionally, cockatiels will eat grubs and different insects. 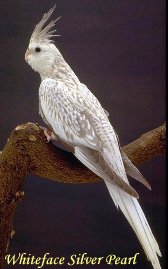 Cockatiels have come a long way from their wild counterparts. If you are looking for a pet bird who’s antics can keep you in stitches, you may want to consider purchasing a cockatiel. These birds are very playful and love doing things just to get your attention.

Presently I own a number of parrots ranging in size from a Moluccan Cockatoo to Parrotlets and Budgies. Of all of my birds, the tiels have stolen the largest portion of my heart and my home. I can’t exactly say why, but since purchasing my first 3 cockatiels and raising that first clutch of babies, I can’t imagine life without them. They are little darlings one minute and demons the next. They whistle greetings to me every morning and upon my return home from an errand. They love scritches and kisses and beg for my attention. They are one of my greatest loves. They line up to share my favorite TV programs with me and fight amongst themselves for the seat closest to “mom”. They find many ways to be noticed when I come near the playpen or cages. Even my parent raised breeders jump up in the doors of their nestboxes when I open them, just to express their happiness in the form of kisses and whistled music.

Many people believe that female tiels just want to be loved and cuddled, while males seem to be more standoffish, very active and vocal. Personally, I have noticed more difference in their vocal abilities than in their personalities. The males do a lot more whistling, talking and mimicking than the females. I’ve never had a female who would whistle more than a note or two. As for their desire for love, I think a lot of that depends somewhat on their genetic makeup, but mostly upon how the birds are raised and treated.

I have found cockatiels to be quite intelligent. I’ve heard of many that are able to sing entire songs word for word and know personally of some that can whistle entire songs. Tiels seem to be natural acrobats and clowns and just love getting laughs and any type of attention (including just getting your goat at times).

Cockatiels make wonderful pets for those who’ve never had a bird before. They are great for young and old alike. If handfed and tame, they are usually gentle, loving and very personable pets. They love attention and if worked with properly, they aren’t extremely demanding. Set aside a certain amount of time for them each day to receive your total attention. This will keep them the tame and loving pets most people desire.

Cockatiels like playing games. If you want to watch something really comical, give them a few pieces of spaghetti. They’ll have it wrapped around their necks like a big necklace. They are not the easiest birds to train to do tricks, but they have enough cute antics of their own to make it worth working with them. One trick they will pick up very quickly is the ability to ‘step up’. This is the first command you should teach your bird.

As far as speaking ability, I’ve personally never seen a female cockatiel speak, but have heard some folks say theirs have. Most male cockatiels have the potential to learn to speak. The cockatiel’s voice isn’t the easiest to understand, it’s sort of squeeky and scratchy. Although their voices are not nearly as clear as amazons, they can attain about as large a vocabulary. Whether they speak or not will depend on the trainer, his/her patience, and his/herr ability to be persistent and consistent.

Tiels are generally pretty quiet birds, especially when compared to most of the larger parrots. Like other birds there is some period of the day when they are fairly vocal, but cockatiels (especially females) are quiet enough to be kept in an apartment.

Your tiel will require time out of the cage. How much time depends on the individual bird. A handfed or tame cockatiel will remain tame if you take it out and play with it for only an hour a day. But, the more time you spend with your bird, the more loving and tame it will be.

If you want your bird to be a member of the family, include him in your daily life. Most cockatiels even like showering with their owners. When you eat, offer your bird some of the food as long as it’s not high in sodium, fat, or sugar and doesn’t contain lactose. If you are watching TV, allow your bird to watch with you. My cockatiels like to line up on their perch to watch TV. It’s rather funny to watch them fight for their favorite spot so they have a better view of the TV.

There are a few minor drawbacks to living with cockatiels. These birds have what is referred to as powder down which provides a protective coating to their feathers. It also provides a coating on everything else in the rooms they occupy as well. Powder can be easily removed during your normal household dusting. In addition, cockatiels tend to lose a lot of small feathers (sometimes on a daily basis during a heavy feather molt) which fall to the bottom of their cages and on the floor. Cockatiels also love to toss their food in a fairly large area around their cage. Sweeping up, along with changing cage bedding, food and water, will become part of your daily cleanup ritual.

If you are considering purchasing a cockatiel, I highly recommend a handfed bird from breeders or reputable pet stores. If you purchase a cheaper parent raised, flock bred or unsocialized bird, you will have your hands full and may never know the true joys of a cockatiel. Ask the breeder or pet shop about the bird’s parents. Most good breeders provide birth/hatch certificates with all of their birds, even if they are sold to pet shops. The certificates I use give all of the background information I have on each bird. This information gives you some idea of the potential your bird has in terms of genetics in case you choose to breed your bird in the future.

I also recommend that you take a new bird to the vet for a well baby exam to be sure it is healthy. Many breeders and pet stores give new owners a few days to check a bird’s health and will take back the bird if there is a problem.

If you are looking for a bird to bring joy, love and fun to your life, then a cockatiel is the bird for you.