The moon was a sliver of platinum against a midnight sky and long shadows were cast on the ground from the shining orb. After an early dinner, the little Moluccan Cockatoo heard the sound of popping popcorn coming from the kitchen and he smelled the rich smell of its delicious aroma. Being closest to the front door, he was the first to see a Ghost glide jerkily up the path and ring the doorbell. Mom opened the door and greeted the little goblin. He said, “trick or treat,” and Mom handed the ghost some candy and it scampered away. The Cockatoo was fascinated to see a ghost was so easy to send on its way and settled into a crouched position with his crest half raised to watch for more Halloween visitors outside his window.A pirate was next to appear and little Moluccan yelled to his flockmate, a mostly green conure, “Hey look, you would be a great addition for that costume. You would look perfect sitting on the shoulder of that pirate!” And they discussed in avian sounds the prospects of how the conure would certainly lend more authenticity to the pirate’s outfit if he were to perch there for a few rounds of houses. Mom gave the pirate some candy and away ran the pirate yelling something about “maties” and “Chips Ahoy,” which the Moluccan was quite sure was a cookie. 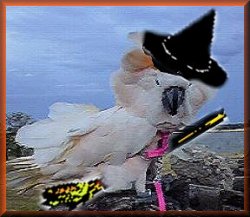 On the street coming toward the house was a beautiful, tiny fairy Godmother. She had a wand in her lovely hand. Her frock was a sparkling gown. The Moluccan called to his friend the Umbrella Cockatoo and said, “Look, a Fairy Godmother is coming. You would look beautiful sitting on her hand to help her wave her wand. She has on a crown which greatly resembles your lovely umbrella crest.” The umbrella cockatoo agreed that the fairy Godmother was indeed lovely, but with the prospect of popcorn looming large on the horizon for later, decided not to ask the tiny fairy if she needed any help. Waving her twinkling wand in the air, she accepted candy from Mom. As she walked away, it looked like starlight sparkled with her steps.

Little Moluccan was getting sleepy and he puffed up his feathers around his beak and dozed off. He could not believe his eyes moments later when he opened them and saw a lovely ballerina in a pink tutu walking to his door. She wore white slippers and had a sash across her chest in a rainbow of colors. “Oh, look there!” He said to the Leadbeater’s cockatoo. “You would be so beautiful on her arm and you could be a part of Halloween by spreading out your rainbow crest.” The Leadbeater’s thought about it for a few moments before agreeing that he would indeed look lovely with a ballerina. He replied that maybe Mom would just paint his picture with a ballerina so he would not have to go out into the chilly night air to see what he would look like if courting a prima ballerina.

“Look Grey, here comes Mr. Frankenstein,” called the Moluccan to his flock friend the African Grey. “He looks better than when we see him on television,” said the Grey. “Hey there, Frank, what cha doin’?” asked the Grey parrot. “Trick or treat,” said Frankenstein who took his candy and shuffled off down the walk. The Grey Parrot gazed at him making his retreat and admired the huge bag of candy that Mr. Frankenstein carried.

The sulphur-crested cockatoo had been watching the Halloween visitors with interest. He had to raise his flippy yellow crest and skreech when a little human face appeared at the door surrounded by huge sunflower petals. “If you have seeds in that sack, I will go out with you for a while,” he thought. The little sunflower opened her sack yelling “Trick or treat.” The sack was full of candy. Not one seed in there. “Bye Bye,” said the sulphur-crested cockatoo who was so happy he had a few seeds of his own hidden under a toy in the bottom of his cage.

“Popcorn time!” was heard and all the bird’s bowls were filled with fluffy white-puffed kernels of popcorn. “Mmmmmm,” they said, agreeing that popcorn is just about the best treat of all the trick or treats in the world.

It was getting late and all the masked characters had stopped coming to the door. Little Moluccan was getting a little sleepy but he was still wondering what was his place in the Halloween celebration. Just then his Mom came into the room and said, “Come out, dear little Moluccan, and help me, please. I will set you on the floor and you and I will comb every inch of it looking together to see if any pieces of candy are down on the floor. If any of the parrots ate the paper on the candy, it could hurt them so we must find them all.”

Little Moluccan stepped UP with enthusiasm to his Mom’s hand. Then he was lowered to the floor and began to help with the search. Knowing that he was the best floor-comber in the whole flock, he was confident that he could shine with the task presented. Finding a butterscotch piece under the coffee table still wrapped in golden paper, he scooped it up by the twisted end and raced to his human to show off his found treasure. “Good Boy! I love you!” she said. Little Moluccan was so happy. He had found his purpose for Halloween. He had helped all the other birds in the flock to enjoy the evening and now he was helping his Mom.

“Happy Halloween,” he thought as he snuggled into the side of his Birdy Buddy sleeping form and closed his eyes against the witches and vampires that were still roaming the night outside his well-lit home. “Sweet dreams,” called his Mom as he drifted to a safe, delightful Halloween dreamland. “Ah luf you,” he mumbled in his sleepy cockatoo voice, happy with life and knowing another great day with his flock and his Mom would come with the light of day.