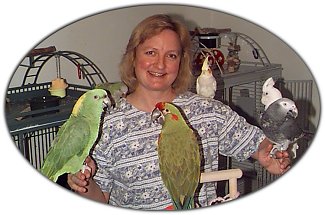 It didn’t start out as an addiction, but then, addicts are never addicts at the outset. No, addictions creep up on you, a little at a time, through curtains of self-denial. Part of overcoming an addiction is acknowledging and confessing it, so this is the story of my addiction to parrots…It started innocently enough. Wally the Quaker Parakeet came to live with us for all the wrong reasons. The shopping trip that produced him was intended only to replenish the dog food supply in our household. How does one set out to buy dog food and end up bringing home an extremely intelligent and demanding little being who will require love, care and attention for possibly the next 20 or 30 years? Hindsight is always 20/20, and in retrospect it is easy to see that many of the signs of a serious addiction were there right from the start.

Wally had me under his spell in no time. I was charmed by the saucy personality and bright-eyed intelligence of this little character. What a perfect little companion! Even the roomy cage that we purchased for him didn’t take up much space and only required a minimal amount of rearranging. When we went out for a few hours it was wonderful to know that Wally was safe and secure inside his cage and we had no worries about coming home to find the kitchen trash strewn about or my favorite new heels chewed into an unrecognizable mass. What fun it was to pick out cute and interesting toys for him and watch his unbridled enthusiasm and curiousity when each one was introduced. What a delight to chop veggies and fruits for him, to offer him fresh sprouts, or a few cooked legumes from the pot of bean soup and watch him enthusiastically appreciate my culinary efforts. What bliss when he would perch contentedly on my shoulder and whisper “Good Boy!” into my ear.

Wally gave me so much pleasure, it only seemed natural to share my joy and enthusiasm with others. But it didn’t take long to discover that there are two kinds of people in the world – bird folks and non-bird folks. And it seemed as though all of my friends were the latter. Or was this another early sign of the addiction? Maybe. But instead of taking their wary, sidelong glances and total disinterest in discussing Wally’s attributes as an indication that I might have a problem, I decided to find new friends who shared my newfound interest.

On the internet, through the marvelous technology of search engines I quickly found hundreds of people who were like me! My birdie buddies were terrific! By e-mail we shared new birdie recipes, discussed toymaking ideas, exalted with each other when the subjects of our addiction spoke new words or learned new tricks, and cried and consoled one another when sorrows came to pass. One thing that I soon noticed about many of my new friends is that they were not single bird owners. Some had two or three or even six birds! I began to think about adding a second bird to our household. After all, Wally had given me so much pleasure, surely a second bird would be double the joy!

My husband, who adored Wally, was easily convinced and soon Chester the Timneh African Grey came to live with us. Chester was not purchased impulsively like Wally. Oh no. This time around I was determined to do everything right. I spent months researching the species of parrots commonly available as pets, deciding on the traits that were most important to me and eventually narrowing the list of candidates to a Timneh. I then began to consider my options for acquiring a Timneh and was fortunate to discover a small, private breeder close to my home. She was wonderfully caring, did all the things that my experienced on-line friends said a good breeder should do, and best of all she had three bouncing, baby Timnehs who were approaching weaning. While Chester finished learning how to eat by himself, I was in absolute bliss preparing for my new arrival. Selecting a cage and finding the perfect spot for it (this one required a tad more rearranging of the furniture…), spending hours in the bird toy aisle agonizing over which toys would safely stimulate my new baby without frightening him, buying a delectable selection of pellets, grains and birdie delights, choosing a new playstand – I was the epitome of an expectant mother. When Chester was finally weaned and his homecoming day arrived, a birdie palace of luxury awaited him.

Chester was everything I’d dreamed he’d be. Incredibly smart, friendly and yet independent, a wonderful talker and whistler. And taking care of him was hardly any more bother than Wally alone. Between the two of them, I was in ecstasy. Who could want more? And yet, even before we celebrated Chester’s first hatchday, way down deep in the hidden chambers of my subconscious I began to think about birdie number three.

I guess it was at this point that I began to suspect I had a problem, because this time I did my research in secret. My husband had no idea that I was planning to move his desk from the den to the basement to make room for our next addition. With my research complete, when I finally broke my silence and started to casually drop statements about what fantastic birds Goffin’s Cockatoos were, I think my husband began to suspect I had a problem too. But his protests were feeble and my determination was strong. Daisy came to live with us on a crisp, clear day in the late fall of 1997.

She introduced me to a whole new dimension of bird ownership – cuddling! While Wally and Chester were both affectionate in their own way, nothing prepared me for the unrestrained affection that only a cockatoo can display! What a delight! And having three birds seemed the most natural thing in the world.

But the signs of an ever-increasing problem were all there. What was formerly known as “the den” was now commonly being referred to as “the bird room”. A large portion of my weekly grocery list was written with the birds’ diets in mind. I began setting my alarm clock a half hour earlier in the morning so I had plenty of time to change cage papers, chop, dice and cook nutritious foods, give everybody fresh water, and a little bit of play time before work.

I’m not sure exactly when it began, but sometime early on in my addiction I began to casually scan the “Birds for Sale” section of our classifieds on a daily basis. It became part of my normal routine, as ingrained as brushing my teeth or drinking my morning coffee. And that was how I discovered Beaker, our Yellow-Naped Amazon. It took nearly a week to turn my husband’s firm “NO! Four birds is enough!” (Four? I guess I forgot to mention that Sunny the Cockatiel had come to live with us as a birthday gift for my teenage daughter.) into a “Well, I don’t think it’s a good idea…” and finally to a resigned “Okay, we’ll go look at her but I’m not making any promises!”.

Beaker was a ten-year-old charmer who could sing opera, said “bye bye” and “I love you” in the most endearing voice anyone has ever heard, and desperately needed a new home. Not just any home, OUR home! And with her arrival, the last vestiges of our den disappeared. The piano moved out, Beaker moved in, and the bird room, complete with full-spectrum lighting and a HEPA air cleaner, was official.

My old life, the life where we could spontaneously hop in the car on a Friday afternoon and take off for the week-end without a second thought, the life where I could cook Sunday morning eggs in a non-stick skillet, the life where I burned candles and incense with reckless abandon, the life that didn’t revolve around birds, was over. The addiction had seen to that. I finally realized that my addiction was real and was serious, and I had to do something about it. I promised my husband, but more importantly I promised myself, that Beaker was the last bird. The addiction had already changed our lives, and if it didn’t stop at once, where would it end? Would I resort to selling the living room furniture to make room for more bird cages? Would I pawn the good china for bird toy money? Would I stop making my famous guacamole dip just to be certain none of the birds would accidentally get a taste?????

I am proud to say that it has been nearly two years since my decision to quit, and I have only had one relapse – George, a wonderfully endearing Red-Front Macaw. Although my husband was in a state of near shock when George came home, I view it as a learning experience. I was trying to kick the addiction on my own, without any help, and I failed. Now I know that I can’t do it alone, that I have to get help. So I am thinking of joining a local support group of people who share my addiction. It’s called a bird club.