It is a surprising fact that two exotic birds, crow, and raven, are very similar. Even though they belong to two different families, crow pertains to Corvus Brachyrhynchos and a raven member of Corvus Corax. Still, a man can hardly identify them because of their indistinguishable characteristics.

But the question arises of how a person can recognize them and what factors he/she should consider during their identification. If you are one of those curious persons who are passionate to know about their recognition features, you are on the right page because we are going to discuss top features that will assist you in identifying that whether you are looking at a raven or a crow.

Let us get started!

The difference in physical characteristics

Crows and ravens have a massive difference in their physical appearances. Some of their diverse physical characteristics present below that we have explored.

First and foremost, size is the primitive clue for their recognition. Crow is smaller than a raven. The length of a crow is approximately 45 to 53 cm. On the other hand, the average size of a raven is 58 to 69 cm.

Thirdly, the tail is another indication point between them. If a blackbird has a more rounded and squared tail, it means that he is a crow. But you see a blackbird in a crow shape with a wedge-shaped tail; he is not a crow. He is actually a raven.

The difference in the vocal

If you face difficulty pointing out who is a crow and who is a raven with the help of their sizes, do not worry. Vocalization is another field mark that can assist you in this purpose. Both exotic birds call but differ in tone.

The voice of a crow usually is “kaw, kaw, kaw.” This tone is raspy, nasal, and high-pitched. They tend to become more and harsher and louder with time.

If you hear the sound of “croooaaak,” “gronk- gronk,” “tok”, and “wonk-wonk, understand that he is a ravel, not a crow. They do not possess high-pitched vocals, but they have deeper or less pierced sounds.

If we compare the intelligence of a crow and a raven, the crow gets leads over raven because of their intelligent behavior.

A crow is such a bird that can recognize the different faces of diverse human beings. It means that he has a remembrance feature.

The crows know the art of how to attract different persons towards themselves. Because of this reason, he has the stamina to live in the urban areas where they find some kind masters who can provide enough food daily for themselves.

The murder of crows, a film, has been uploaded on Youtube. The people interested in getting to know more knowledge about this desirable blackbird can watch this nature documentary movie on YouTube.

“Aesop’s Fables” comprises many short stories. “The crow and the pitcher” is in those stories. In 2014, many researchers researched the crow, and that story is based on these pieces of research. They said that their intelligence is comparable with seven to ten years old children.

Various videos have been recorded on crow in the different regions of Japan and Canada. Many of these videos are present on YouTube, and you can watch them anytime.

The difference in the diet plan

No doubt, a bird cannot live without taking a proper diet, whether he is a raven or a crow. But they both eat different types of dies to keep themselves alive.

Both crows and ravens are present in North America, but some differences are still existing. The first is that ravens do not tend to live in the Midwest and southeast. In the meanwhile, crows are living their lives all across the American states.

Whether you are in the Arctic ice floes or grasslands or deserts or mountains or coasts, you can easily find ravens there.

But if you are on the busy city streets or urban colonies or small villages or agricultural lands, you can take a look at crows that are chirping there.

The reason behind these habitual differences is that ravens love to live a solitary life, but crows love to enjoy different places full of human beings.

Migration is another reason that differs the ravens and crows. Ravens do not possess a passion or need to migrate from one place to another. 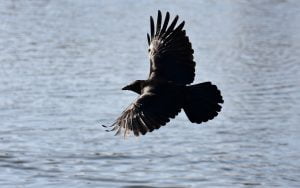 But if we talk about the crows, most of their species migrate but not all. Canadian crows travel to the south or lower areas of the United States because extreme coldness badly affects their feeding habits. They are also known as partially migratory species.

In Irish mythology, crows are the sign of war and death. Buddhists consider that he protects the Dharma. The people who believe in Australian Aboriginals think they are not part of our earth.

The people of Northeast Asia and North America take ravens as an enemy of god. The ravens have also mentioned in the Old Testament of the Bible, and you can find many examples of him if you read a book, Bible.

The only purpose of writing this article is to inform you how you can identify a crow and a raven. We have discussed some beneficial knowledge with you. Hopefully, this piece of information will aid you in recognizing a crow and a raven.