The delightful Goffin’s Cockatoo (Cacatua goffini) is one of the gems of the avian world. While not quite as popular in the pet trade as their larger cousin, the Umbrella Cockatoo, these adorable, energetic birds have much to offer.Goffins are one of the smaller members of the cockatoo family, averaging around 12″-13″ in length and ranging from 200-300 grams in weight. The feathers are predominantly white, with pale yellow on the underside of the wings and tail, pink lores, and a beautiful salmon-colored tinge to the base of the head and neck feathers. The beak is greyish-white. The eyes are black (however, adult females tend to have a reddish-brown iris), surrounded by a featherless white eye ring. As with all cockatoos, Goffins have a crest, but it is much smaller than that of the Umbrella or Moluccan Cockatoos. It is estimated that Goffins have an average lifespan of 40 years, so like most parrots, they are extremely long-lived.

Goffins are native to the Tanimbar Islands of Indonesia, however they are seriously endangered and possibly even extinct in the wild due to widespread trapping and destruction of their native habitat by the timber industry. Throughout the 1970’s and 80’s, they were exported by the tens of thousands. In 1992, the Goffin’s was added to Appendix I of the C.I.T.E.S. (Convention on International Trade in Endangered Species) treaty. C.I.T.E.S. is an international treaty, incepted in 1975 and ratified by 144 nations committed to work together so that endangered and threatened species of plants and animals will not be forced into extinction through exploitive trade. Appendix I is reserved for those species who are imminently threatened with extinction. Unfortunately, this measure may have been taken too late to protect the Goffins in their native habitat. However, Goffins breed relatively well in captivity, and this may be the key to the survival of the species. Domestically bred Goffins are quite common in the U.S. pet trade. 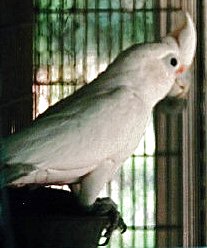 As a pet, Goffins have the inquisitive, carefree temperament of a busy two-year-old child. A Goffin’s is a study in perpetual motion. They are extremely active birds, and are always looking for things to do and explore. This inquisitive nature can quickly land a Goffin’s in trouble, so it is important to provide your Goffin’s with plenty of fun and interesting activities, and never leave him/her unsupervised when out of the cage!

One of the best ways to keep a Goffin’s busy and entertained is to provide a variety of stimulating toys. Because of their considerable intelligence, Goffins love puzzle-type toys – finding hidden things, taking things apart, untying complex knots, etc. A few years ago I gave my Goffin’s, Daisy, a bird toy consisting of a small stainless steel cube in which the sides are held on with bolts and wingnuts. She was instantly fascinated with it, and took it completely apart within five minutes. Soon she could take it apart faster than I could put it back together. I have even seen her attempt to put it back together herself!

Cockatoos love to chew, and Goffins are no exception. By virtue of their smaller size, Goffins aren’t as destructive as the larger cockatoos, but chewing is still a very important part of their nature. As such, it is important to provide your Goffin’s with plenty of destructible wooden toys. Safe, homemade toys are just as satisfying to a Goffin’s as store-bought toys. If you plan on providing your Goffin’s with wooden toys made from your own trees, make sure that the trees are of a safe (non-poisonous) variety, and that they haven’t been sprayed with any chemicals.

While toys are extremely important to a Goffin’s, they are no substitute for daily attention and one-on-one human contact. Goffins adore playtime with their favorite people. Daisy loves to climb all over me while I am sitting at my computer. She preens my hair, attempts to remove my jewelry and any buttons on my clothes, tickles the back of my neck with her foot, and whispers sweet nothings into my ear. She will occasionally take a break from her busy explorations to flop onto her back in my lap or the crook of my arm, allowing me to scratch her head and tickle her tummy. Goffins love to spend time with their people, so I make an effort to include Daisy in as many household activities as possible. She sits on the handle of a large natural wicker basket and treks with me from room to room. In this manner we watch TV together, fold laundry, do the dishes, etc. Goffin’s don’t care how mundane the task, as long as they can be a part of whatever is going on.

Because Goffins are so active, it is important that they have a large cage – the larger the better. Daisy lives in a cage that is sold as “macaw-sized”, but she uses every square inch of it. If a Goffin’s will spend a substantial amount of time in a cage, then it is even more important for the cage to be large. The cage should also have a Goffin’s-proof latch or closure, as Goffins are escape artists!

Another virtue of the Goffin’s smaller size is that they don’t screech as loudly as the larger cockatoo species. Don’t get me wrong, a Goffin’s can certainly make noise and I wouldn’t classify them as a quiet pet by any standard, but they don’t emit the window-shattering, ear-bleeding screams that their larger cousins are capable of. As with most birds, Goffins will celebrate the joy of being alive by vocalizing several times per day, usually in the morning and evening. They will also often vocalize when they are excited, happy, or alarmed. This is quite normal and to be expected. However, a bird that spends the day screaming non-stop is usually indicative of a bird with a behavior problem.

Behavior problems such as excessive screaming, feather plucking and mutilation, and biting, can be brought on by any number of things. Lack of attention, deprivation of human contact, lack of stimulation (no toys or inadequate toys), cage too small, poor diet, and illness are just a few examples of things that can trigger an unwanted behavior. If a behavior problem develops, the first order of business should be a trip to an avian veterinarian to rule out any underlying physical causes. In the absence of a physical cause, environmental factors should be considered. Is the cage size adequate? Is the cage in a favorable location? Is the bird getting plenty of one-on-one attention and time out of the cage? Does he/she have plenty of interesting and stimulating toys to play with? It is important that the prospective Goffin’s owner be aware of the needs and commitment required by this special pet.

Goffins are not exceptional talkers, although most will learn a few words and I have heard of a few who have developed sizable vocabularies. Daisy has learned to say “HEY BIRD!” and “HI BEAKER!” (Beaker is our Yellow Nape Amazon) with much gusto. Her voice is somewhat garbled, lacking the clarity of an African Grey or an Amazon.

Goffins like to eat a wide variety of foods. Daisy’s diet is pellet-based, and I supplement her pellets with vegetables & fruits, cooked beans & grains, fresh sprouts, and organic seven-grain cereal. As a treat, once or twice a week I give her a commercially available seed berry or a peanut.

If you decide that a Goffin’s is the bird for you, the next decision you are faced with is whether to get a baby or an adult bird. This is an individual decision, and no matter what you decide there will be challenges and rewards.

If you should decide to get a baby, it is critically important that you buy a weaned bird. Handfeeding is a difficult and time-consuming process that is best left to the experienced. Many baby birds have died horrible and untimely deaths at the hands of well-meaning but inexperienced handfeeders. Goffins typically wean between the ages of 12-16 weeks, although each bird is an individual and some can take longer than others. Weaning is a process that should never be rushed. To do so may cause some of the previously mentioned problem behaviors. Choose your bird carefully from a breeder or pet store who offers a health guarantee, and who has taken the time to wean the bird at its own pace to a variety of nutritious foods including pellets, vegetables, fruits, grains, and other wholesome foods.

Adopting an older bird can be immensely rewarding. Bonding can take place at any age, and it is a myth that one has to raise, handfeed, or purchase a bird at a young age in order to bond with it. If you are considering the purchase of an older bird, you should spend as much time as possible with the bird prior to the purchase. Ask questions of the seller, and make sure you are comfortable with the answers. Interact with the bird and follow your instincts. Since you will most likely be purchasing an older bird from a private seller, they are unlikely to offer a health guarantee. However, you could stipulate that the sale is contingent upon a clean bill of health from the avian veterinarian of your choice.

The Goffin’s Cockatoo is a fun-loving, cuddly, and extremely intelligent pet. For the owner who is willing to devote the necessary time, effort and love, the Goffin’s will make an extraordinary companion.