Anyone ever seeing a hawk-headed (Deroptyus accipitrinus) parrot, in the flesh …..er……. feather, will always say, “they will take your breath away”. 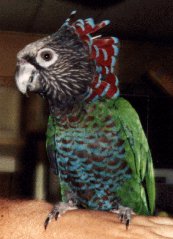 They surely do, there truly is none more magnificent, in the parrot family. The hawk-head is rather a small bird as far as parrots are concerned. There size is comparable to a blue crown conure, a Jardine’s, or perhaps a white capped pionus. Because of the very long tail, which does not taper to a point but rather flattens out and is very square, and their large beak and head, they can “appear’ to be the size of a red lored Amazon.

They are most known for having the ability to raise the head feathers when excited or defensive. These elegant feathers of rich maroon edged in electric blue, form a crown of glory which frames the entire head. The hawk-heads beauty does not stop there. The crown of color extends down the back of the head circling the neck and extends down the entire belly. These rich colors frame the face of sable brown flecked with champaign. The wings, back, and tail sport a rather contrasty emerald green.

Hawk-heads are unique in the fact they are the only bird in their genus, which contain only two subspecies. 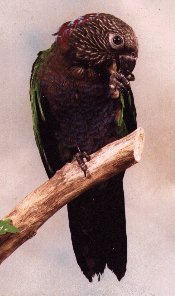 Most of the hawk-heads we have in the U.S. are of the nominate subspecies (buff head), originally from Guyana in the North Eastern coast Of South America. Guyana extends down, long and narrow, touching a Northern part of Brazil. The subspecies, or Brazilian hawk-head, is found South of the Amazon river, as the name implies, in Brazil.

Hawk-heads are forest birds and very territorial. They usually travel alone, with their mate or family. Because of this solitary behavior very few hawk-heads were brought into the United States. Brazilian hawk-heads that came in were probably brought in from Paraguay and Bolivia, where other species of parrots were trapped. Before the introduction of Parrots of the World, by Joseph M Forshaw, wildlife officials didn’t really know the country of origin of many birds. Once Forshaw’s book was available hawk-heads could be identified as to country of origin, and Brazilian hawk-heads were no longer allowed to be exported.

Hawk-heads in the wild have a nasty temperament and will pick a fight to the point of carelessness. In trapping these birds, like many others, a call bird was used. In the case of the hawk-head, when a call bird was in their territory they would come down to fight, not to feed as other species of birds would. In defending their territory so vehemently they would be unaware of the trapper lurking in the blind. They were very easy prey for the experienced trapper. In being such solitary birds they were few in numbers for the trappers, so in any shipment, there might be less than ten hawk-heads. Other species could number into the hundreds.

Thankfully hawk-heads commanded a high price so they were well taken care of during holding and shipping. Much of our losses with these birds was in our ignorance of how territorial they were. In aviculture the hawk-head is a challenge. Much is still being learned as to their needs in breeding. Early on it was thought only one pair could be held on the same property for successful breeding. It has since been proven this is not the case. There is a major problem in mate aggression with this parrot. Many an experienced aviculturist has lost a mate of either sex, it doesn’t always hold true the males do the killing. I don’t know of anyone actually knowing what causes the mate aggression, but there are many educated thoughts in regards to the problem. Some speculate one is ready to breed while the other is not. Some think that they just don’t like each other, and believe you must have compatible pairs.

One aviculturist I know has half the cage wall and ceiling of solid metal with a perch and a nest box. The male cannot climb up the sides to get to the hen which is flighted. The male on the other hand is clipped to prevent him from getting to the hen in case of an attack. Most feel a big flight is necessary for the well being of the pair. Mine although, were in five foot flights and did very well, but personally I would like them in eight foot flights. There are many breeders that are breeding them in small flights in their kitchens, basements, and their garages. Solitude seems to be important, and since they like sleeping in their nest box, they should always have one available. Most breeders seem to prefer a deep nest box, but again, there are exceptions.

Their diet doesn’t seem to be anything exceptional, and there are no major problems with specific health concerns, that we are aware of. A good parrot diet seems all that is required. I personally fed a lot of vitamin ” A” type of foods. Hawk-heads seem to really like their veggies and fruit.

As a pet, one aviculturist (Howard Voren) likens their personality to a caique, and I tend to agree. “.

They are extremely affectionate, and rambunctious. Hawk-heads seem to have a knack of entertaining them selves, so you are not at their beck and call. I know of many who are at liberty on their cage, or play area most of the day without them getting down to find their owners. In this regard they don’t need an overly large cage. If on the other hand you work all day, then a little common sense should dictate a bigger cage, with lots of fun stuff to play with. They are very intelligent and seem easy to train and mesh into what you expect of them. They really seem to like routine, and can be very satisfied with time out to play and time with you, a lot of them even put themselves to bed at the appropriate time. Most people that have them as pets can’t say enough about them. I personally recommend them highly.

Voice is another topic of importance. I personally don’t think they are good talkers ( I raise greys, how could I?) although they do have a nice quality about their voice. They will learn a few phrases, and say them quite clearly. Their normal call can be quite loud, but it is very clear and not screechy, more like short whistle noises, but loud. They tend to sound off in the morning and evening, and rarely have I known one that was obnoxious. In a breeding situation that is another story, they do call back and forth a lot of the time, even while sitting right next to each other.

If you are looking for an enjoyable pet bird, a hawk-headed parrot should definitely be on your list of birds to be considered

I would like to thank Howard Voren for some of the trapping information provided.