Fast becoming the most widely distributed of all the parakeet species, Ringneck parakeets are well on their way to becoming as popular an avian pet as the budgie. These two different birds share many of the same traits that make either of them desirable as pets — they are both hardy birds, easily tamed, learn speech with ease and come in a variety of stunningly beautiful jeweled colors.

These large, graceful parakeets are clothed in pastel shades ranging from buttercup yellow and lime green to numerous shades of blue, with distinguishing rings adorning both their throats and necks. They boast long tapered tails, and the males almost always sport a red beak. They have a natural, perfect feather condition, and their delightful demeanor is one of elegance and poise that cannot be ignored.

Psittacula is the genus name for Ringneck parakeets, and there are four subspecies noted: P. k. borealis, P. k. manillensis, P. k. parvirostris, and P. k. krameri. All of these species are very similar in color, with the Indian Ringneck being the best known and most generally available.

Originally from parts of Africa, Malaysia, India and Indonesia, these long-tailed parakeets are in reality parrots; and when raised in a loving, caring environment, can easily grow to be gentle lovable pets. In fact, raising them as newborn babies from the nest is not necessary to produce a tame gentle bird; as it is the actual art of handling, abundance weaning and socialization that produces the tameness, and continued daily handling is necessary to retain their friendly, gentle nature. If subjected to the amount of attention required only by daily necessary chores of watering, feeding and cage maintenance, they will undoubtedly become nippy and unfriendly quite quickly. To maintain a bond with the owner these social creatures must be given adequate quality attention and play time on a daily basis.

As breeders, they are a fascinating specimen that enhances any aviary. Breeding the Ringneck can be a very enjoyable experience due to the wide variety of color mutations that are possible. Some courtship rituals performed by the male become quite elaborate, and quite interesting in an educational aspect as well as entertaining to watch. The male’s brighter plumage demands an observer’s attention, and his intense courtship display are delightful to watch considering the female is normally only receptive to the male during breeding season.

Ringneck parakeets are sexually dimorphic, usually at two to three years of age–meaning that the sex of a Ringneck can be determined by its coloring. Sometimes sex cannot be identified until the bird reaches this age due to the time it takes for younger birds to show their final coloring. In appearance, they are exceptionally striking birds, with the males having a more dominant neck ring than that sported by the female.

Second only to the budgie, the potential for various color mutations in the Ringneck is astounding. While impossible to list all of the color mutations possible with this species, the following covers the most widely recognized and available mutations.

One of the most common mutations is the beautiful lutino Ringneck. These birds are a pure beautiful yellow, with a red beak and pink eyes. Their feet and legs are flesh-colored, and the characteristic neck ring of the male is a beautiful rose color. Once considered a rare mutation, the lutinos have become well established in the avicultural world, making them easily obtainable in the United States at a reasonable price. 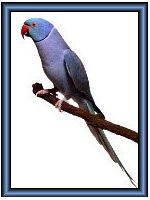 breeding, (though considerably more expensive) the blue Ringneck is also no longer considered a rare mutation, and now comes in two varieties. It is thought that most of the blue mutations now available descend from the wild-caught pair owned by the Duke of Bedford in the 1950’s. The appearance of the original blue mutation in the male reveals soft muted shades of a powdery Wedgewood blue, which is a recessive trait. The distinctive neck ring is a soft grayish-white, edged with black at the sides and front of the throat. The feet and legs are gray, and the bill is red.

The second variety is the turquoise, which includes green in the body color. Differences between the male and the female of this mutation include a green face with mostly blue body for the male, while the female shows only a small amount of blue on the abdomen and tail. Some of the lighter mutations have wing and tail feathers that shade into green at the outer edges, while the darker mutations sport beautiful violets and purples.

Pairing of a lutino with a blue results in the breath-taking albino mutation Ringneck. Albinism is caused by the blocking of both melanin deposits and carotenoid conversion of lipochromes, resulting in this particular mutation lacking any color pigment. Thus, they have no neck collar, making both sexes appear identical. They have red beaks and eyes, and their feather coloring is a pure, stark white. Their total lack of pigmentation actually makes these birds quite visually attractive.

Other notable mutations include the cinnamon, a lime yellow with cinnamon colored flight and tail feathers; the gray, with plumage consisting of shades of black, silver and gray; a cream albino with red eyes and white coloring; as well as the rarer recessive yellow head, sex-linked cinnamon yellow head, and the white-headed blue. A rare pied mutation is currently being developed in California, and other mutations being attempted include mauves, cobalt blues, and violets. In theory, all color mutations that are currently found in budgies are possible to produce in Ringnecks. Most mutations are quite beautiful, and the sheer number of possible color combinations is an exciting inspiration to breeders. I am convinced that this will continue to make breeding these beautiful birds a challenge for many years to come, and will undoubtedly result in color mutations that are presently only dreamed of by Ringneck breeders.

A new mutation is created by a defective gene which changes the color and/or pattern of any bird. Establishing a mutation and its method of inheritance can take years. To be officially recognized as a mutation, any new color and/or pattern must be thoroughly test bred to find out if it will reproduce, and the method of inheritance. Until such proof has been established and can be duplicated by other breeders, it is not considered a mutation. Thus every bird we find that is not exactly like the nominate cannot be and should not be claimed as a mutation until it has undergone test breeding. It can take several years to firmly set or establish a mutation and have it duplicated by others. What is thought to be a new mutation may be a defect in feathering, alterations in nutrition, stress, illness, or a variety of other reasons. Some color changes and patterns develop from nutritional deficiencies, and can be maintained as long as the birds are kept on the same diet. Other deviations can appear due to type of formula fed to chicks, and the method of feeding.

As pets, a generally accepted myth is that male ringnecks make better pets than females. It has been our experience that the personality of the bird as well as the amount of attention it receives on a regular basis play a much greater part in determining their pet potential than whether they are male or female.

When taught to speak properly, these beautiful parrots can easily acquire an extended vocabulary. Their speaking ability can outrank that of the cockatiel or similar smaller birds, although their speech may not be quite as clear as the larger parrot species. Ringnecks usually begin talking at around one year of age, and many start even earlier than that. They are highly intelligent birds, and have been reported to master vocabularies of up to 250 words. While not every Ringneck has the capability of reaching this astounding level of speech, much of their vocal and educational development depends on the amount and quality of time the owner spends teaching and training them. (Please keep in mind that these are generalizations, and each bird is an individual, just like human children. No two Ringnecks will begin to speak at exactly the same time, nor master the same words or number of words.)

Ringencks, as with most other pet birds, can be destructive chewers. Rather than constantly saying “No!” when your bird attempts to demolish something, keep a supply of challenging toys on hand. This precaution will go far in preventing the dismantling of your favorites pieces of furniture.

With their slender, streamlined build, these birds are capable of great speed, and educated ringneck owners know to keep their birds wings clipped to prevent inadvertent escapes, as well as to assist in maintaining their tame nature. Slightly larger cages than normal may be needed to accomodate their long tails and prevent broken tail feathers.

While the majority of pet bird owners depend to some degree on pellets to provide adequate nutritional requirements, it is worthwhile to note the eating habits of any birds in the wild. Most wild Ringnecks appear to have a preference for nuts (naturally), seeds, grains, fruits and berries. Consequently, providing these food items as well as fresh fruits and vegetables in addition to your choice of pellets should be a completely adequate diet for your Ringneck.

When provided with adequate attention and quality time, Ringneck parakeets are very friendly and playful, and one of the most beautiful birds I have ever encountered. They depend on us for their good health and happiness, and we rely on them for comfort and enjoyment. Having a Ringneck for a pet is unlike any experience you have ever imagined. A relationship with one of these beautifully elegant birds is truly exceptional, and one you will treasure forever.