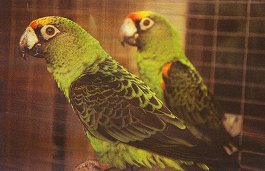 I saw, in person, my first Jardine’s Parrots in 1985 and there and then decided that we had to add a pair of them to our collection. Finally, in 1986 I was able to get a pair from a wholesale bird broker in California’s central valley.

We segregated our new birds, did cultures and whatever was needed, and watched them for a period of several weeks to make sure that nothing unwanted was spread within our aviaries. It was during this time that the Jardine’s earned their names, George and Gracie, quite the characters.

These were very young birds and didn’t show any orange coloration. I was truly hoping they were indeed a “pair” not just two birds. After a year I had them surgically sexed by an avian veterinarian, and they were indeed male and female.

There was little difference at first in their appearance but as they matured the hen got quite a lot more orange on the top of her head, than the male, and it has remained thus; their eye color has become consistent with the description in R. Low’s Parrots, Their Care and Breeding – our male’s eyes are of a reddish brown and the hen’s are brown. They also have orange on their ankles and on the edges of their wings. 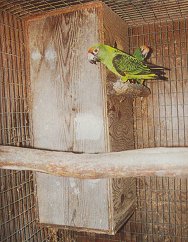 Of the two subspecies that were available at the time, ours seem to be the smaller subspecies P. g. fantiensis.

Once settled in at our place, it took nearly two and a half years for the pair to really calm down and even begin to act like parenthood might be in their future. At the end of the two and a half years it seemed like overnight they settled down and went into the nest box. They are kept in a 30 x 30 x 36 in. cage, with the front (facing south) completely open and extended 6 in. beyond the roofline. The sides and back are enclosed.

During the next two years their behavior lead us to believe that we would have babies to feed but every time they would get into a breeding situation, the male would load his backfeathers up with the shavings in the nest box and go to the nest opening and shake. Everyday the pile of shavings under the nest box would just get larger. The more I would put in, the more he would remove. The female would end up laying and setting on three eggs on the bare bottom of the box and proceed to addle them all.

For the next two years this went on, and the eggs would always be fertile and scrambled. I believed, however, that they should have a chance to raise their own babies. Nevertheless, they seemed to always go to nest in the fall and again in early spring. And the male continued to throw the shavings out of the box and the eggs continued to become addled. For those of you with birds that behave like this or are a bit clumsy in the box, you know this frustration. What I was able to figure out over this period of time is that at about the same time that the male started emptying the box of shavings, the female would pick green feathers from her lower chest giving herself a black brood patch. So now I was finally able to key on to their behaviors and try to be prepared. I wanted them to be parenting their young from the egg – not me. The babies of this species hatch in 26 to 27 days, at about 8 to 9 grams, and I would rather leave the first couple of weeks of feeding to Mother Nature.

What I did with success for the next two clutches was to soak a colander full of pine shavings, let them drain until the shavings were just damp and then placed them to a depth of about 4 in. deeper than what the male had previously hauled out. The damp shavings were left intact and from that point on he stopped unloading the nesting materials. This damp, deep shavings method was successful for two clutches, three eggs and three babies each time. This was in 1993. Since then the pair have not required the damp shavings. I do change and add shavings to the nest occasionally, as necessary. The pair have been giving us babies every year with no more addled or infertile eggs. I hope this information may be of help to others who have had similar problems getting birds to care for their eggs and hatch out their babies.

This pair usually has three eggs in the fall and again in spring. These birds have become excellent parents, and produce nice, well fed babies that we bring into the house for handfeeding at 14 to 16 days of age. At two weeks they weigh between 65 and 70 grams.

In 1994 I kept back a hen from this pair and also traded a male from the same clutch for an unrelated male to set up a pair of domestic Jardine’s. They were both handfed, very tame and are setup in an area of the yard where they have interaction between people and other birds. Although they would accept attention from us they were not destined to be pets. They are wonderful birds, maybe a little larger than the wild caught parent birds, but they are identical in appearance.

This season, December 1996, they gave us two eggs and in January 1997 hatched two babies – our second generation domestics. At the same time, the original pair gave us three babies, and they all started hatching within the same week. I think the babies from the wild caught pair were a bit heavier than those from the new pair but I attribute that to parental experience in feeding. They are all within a few grams of one another now. We use a gram scale and record their weights each morning for, as with any baby birds, the lack of a gain or a loss of weight may be the first sign of a health problem.

Presently we are using Exact hand- feeding formulas with distilled water. Over the years we’ve made our own and tried many others, but I am very pleased with everything about these products – excellent weight gains and healthy babies, and the ease of use.

We normally feed at about 105 degrees F. and as they age we raise the temperature of the formula to approximately 108 degrees F. It seems that our African birds have babies with heavy down and they like to be kept in an environment a couple degrees cooler than many other parrots but given food that is a bit warmer. I am usually willing to feed babies as long as they will take the formula.

I personally do not believe there is any benefit to the birds by weaning at the earliest possible moment. They normally wean themselves before three months of age. Our p g. fantiensis males usually weigh 220 -230 grams, and the females about 200- 215 grams at weaning. Baby Jardine’s are great fun, playful and comical as are the other types of Poicephalus babies that we have been blessed with. But the Jardine’s do tend to be my favorites.

I believe that the genders can be easily distinguished by about five weeks of age(if not sooner), the males having a much wider head and heavier beak structure. This year(97) with more of them to compare, I think the females are a brighter green than their male clutch mates. So far I have been very close to correct, but now I have more birds to compare, so we’ll see.

We have also raised Senegal and Meyers babies, and the adults have all had their own peculiar requirements for nest boxes. Our Senegals used a deep rosella box, and the Meyers had a small boot style box. This was just what these pairs wanted, through trial and find. We offered different boxes until they decided which one they would like. It took some time but it was well worth it.

These great little Jardine’s Parrots would benefit if the captive population were managed according to an overall plan. There are no more of these wonderful birds coming into the u.s. Keeping the gene pool viable and diverse is of great importance. The correct identification of the subspecies and the correct pairings of these subspecies is going to matter even more as time goes by. The uninformed or uncaring breeder who pairs different subspecies together is doing these birds and themselves a great disservice.

There sometimes seems to be so many things that certain pairs require that it is so very important for all of us who keep and breed birds to share what little bits of these “unknown behaviors” that we uncover. Being able to share what I have learned is a gift for me.