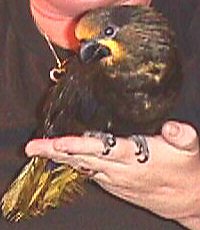 In the business of living I often fail to appreciate the beauty of my gorgeous companion birds. One of these exquisite creatures is Keanu, my Duyvenbode Lory.There are many species of lories and lorikeets, varying in color from plain to the most spectacularly brilliant and beautiful. These birds have two common characteristics, their diet which consists of fruits and nectar and a brushlike tongue which aids them in gathering nectar. As with parrots and parakeets, the term lory denotes the short-tailed species while the term lorikeets is applied to the long-tailed slender species. The Duyvenbode lory, genus Chalcopsitta, comes from New Guinea.

Keanu’s colors are striking and unusual with deep rich chocolate browns, sunny golden yellows framing his face, and brillant blues and violets on his rump. Keanu is as charming as he is beautiful. This Lory is easily one of the friendliest and most affectionate of all the lories. A very gregarious bird, Keanu loves people. He thrives on interaction with his human flock. Keanu is everything that is best in a lory. His extremely attractive personality makes him an exceptional companion bird.

Eager to greet me in the morning, he waits impatiently for me to remove the cover from his cage. In a very loud, shrill, demanding voice he calls, “wanna eat, wanna eat”, letting me know in his own special way that he wants breakfast now. Anxiously he waits for me to disinfect his dishes and fix his food. When he sees that I am bringing his food, he quickly jumps onto my arm so that he can give me my morning kisses. Morning kisses are given with big smoochie sounds and interspersed with shrill cries of “wanna eat”. Once satisfied that he has given me the appropriate number of kisses, he jumps back into his cage to eat.

Keanu’s diet, consists of various fruits, mangoes, pears, golden delicious apples, grapes, bananas and fruit juices. One of his favorites is grape juice. As a Duyvenbode lory, Keanu prefers his liquid nectar to any other food and, if given a choice, nectar would be the only food he would eat. 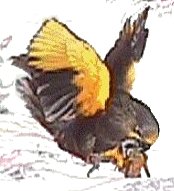 With a full tummy, Keanu is ready to play. One of the most attractive traits of this lory is its ability to play. Keanu is an active, fun loving, bird who enjoys playing with his toys. Since Duyvenbodes are a large Lory, careful attention must be paid to the type of toys that are given. Toys for medium to large parrots are the best choices. Constantly on the go, Keanu needs many toys to keep him stimulated and entertained. One of his favorite toys is his swing, from which he will hang upside down and then play with other toys with his beak. When out of the cage, the toys that fascinate him most are my keys. He will chase them, screeching loudly as if they were some diabolical enemy. Then he will roll over on his back with keys in both feet shaking them vigorously, all the while talking to them and giving them kisses. He loves to play ball. He will toss the ball with his beak and then do his delightful lory hop while chasing the ball that he threw.

This lory is an acrobat whose joy it is to hang by one toe from the top of his cage. His clownlike behavior makes me laugh. He loves to hide in your clothes and has been known to crawl up under your shirt and then stick his head out of the neck where he will proceed to give you kisses. His antics are great fun and his enthusiasm for playing makes him an even more desirable companion parrot.

There is always one exception to every rule and when it come to talking Keanu is the exception. The Duyvenbode lory is not known for its speaking ability. This lory is said to have a gravelly voice not easily understood. However Keanu talks non-stop all day long in complete sentences. He doesn’t know that he isn’t suppose to talk and no one has ever told him otherwise. Like a drill sergeant he gives orders to the other birds, “Scooter dance” and to all who are making too much noise he loudly yells, “Shutup”. This is one very intelligent bird and he has even been known to tell himself to shutup. Keanu loves to talk to his toys. Lying on his back in the bottom of the cage with a toy in each foot, he waves them back and forth all the while talking to them saying, ” I give you kisses” with loud kissy noises. This Lory will do anything to please you and Keanu is no exception to this.

Keanu potty trained easily. Once out of his cage Keanu goes potty on command. Because he is a nectar eating parrot his droppings are very liquid. In some places the liquid nature of their droppings has earned lories the reputation of being dirty birds. Nothing could be further from the truth. In truth these birds are very easy to keep clean.

There is one trait of this lory that I find more characteristic than any of my other parrots. Keanu is as comfortable on his back as he is on his perch. Tummy tickles are his all time favorites. He will roll over on his back to persuade whoever is holding him at the time to tickle his tummy. The whole time he is being tickled he talks, coos, and purrs his pleasure to the delight of his favorite person.

While Keanu is a very sociable parrot he has definite preferences as to who he wants to hold him. A very friendly, loving, affectionate lory he will visit with others in the family. One of his many charms is that he loves to cuddle. The affectionate nature of this lory makes it an ideal pet bird. There is only one draw back to this delightful bird.

The Duyvenbode lory has a loud harsh shrill call that makes my cockatoo sound quiet. While Keanu is Mr. Personality plus, he definitely isn’t a quiet bird. However this is a gregarious fun loving bird, whose beauty is breathtaking, and whose charming personality makes it an attractive pet. If noise is not a problem, the Duyvenbode Lory is a wonderful addition to any flock.