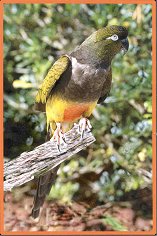 Seven years ago, I told my husband Steve I needed a pet to keep me company while he worked and that I wanted a baby parrot! We attended a local bird fair, where we stopped to see 3 darling 8 week old patagonian conures being hand fed. Steve put his hand in the cage and this little guy jumped onto his hand and ran right up to his shoulder. That settled it. This little patagonian conure was going to be our little Kiwi. We had to of course get a cage, toys, carrying case and food for him. We then took him to a vet who was at the fair, had him surgerly sexed and found out we had a male, got his papers and headed home with our darling baby patti!Kiwi will be 7 years old July 7th. But we almost lost him to heavy metal poisoning. He is fine now, but we will never forget what happened.

On May 2, 1999 our flock (Steve, Kiwi and I) started out from Florida for our vacation to N.C. and Steve’s reunion with his family. We were to stay with them for a week and then go on to Ohio to spend a week with our children and grandchildren.

We had taken Kiwi with us on vacation a couple of years before this and he had done fine. During the trip it rained all day, so we were unable to get Kiwi outside at all. By the time we got to our motel in New Bern, N.C., he was very stressed.

It was still raining on Saturday night when we checked into the motel and set up Kiwi’s play area for him. We tried to feed him by hand, since he had refused to eat the whole day. All he wanted to do was squawk and for me to either hold him or place him on the floor. I knew that he was very stressed, but thought that it was from the rain and not being able to get outside with us.

On Sunday we went to the reunion, but didn’t take Kiwi as we were afraid it would only add to his stress. We didn’t stay long since both Steve and I believed that Kiwi might be getting sick and that we had to get him to a vet early Monday morning.

We took Kiwi to the local veterinarian in Newburn, where they checked his poop and found blood in it. The vet said that this could be several things, but that they did not have the diagnostic equipment to check him out thoroughly. She put him on an antibiotic and fungal medicine. She told us that if he wasn’t better in 48 hours that we should take him to the Raleigh Vet Training Hospital where they had the equipment and doctors who would be able to find out what was wrong. The next morning Kiwi was no better. Kiwi’s condition continued to deteriorate. We were losing our baby! The local vet called the Vet Hospital that we were coming with our bird.

We left for Raleigh right away. As soon as we arrived, Kiwi was admitted and we were taken to an ICU unit. The veterinarian took an x-ray and did a complete workup on him. The x-ray showed a small piece of zinc or lead metal stuck in his gizzard. It was poisoning him! The vet felt that he would be able to pass this once he was stable. She put him in an incubator type unit with oxygen and started treatment to stabilize him using a chelation treatment. This consists of giving the bird medicines which will attach to the metal particles in the blood so they can be expelled. Then certain foods are fed which also help the piece of metal move down the tract to be pooped out.

We could not stay with him and were allowed to see him for only 5 mins that night. It was too stressful on him to see him any longer. We checked into a motel right across the street. It was so hard for us both to leave our baby. We had not left him alone for even one night since he was 8 weeks old.

Kiwi stayed at the hospital until Saturday. The Vet took another x-ray and found that the piece of metal was still in his gizzard. She had talked to our vet in Florida and told us that she was certain that he could take care of Kiwi and perform the procedures that Kiwi needed. But we needed to leave at once and get him home as fast as we could. The vet gave us a medicine, DSM, for the trip. We also had to stop at a lab in Fayettsville, N.C. for some anti-fungal medicine to be sure that we would be able to get it. We drove straight through with no stops. I held Kiwi the whole trip. I kept trying to get him to eat and drink every half hour. We got home at 10:30 pm.

The next morning, our vet, Dr. Don, picked up Kiwi and took him to his home. We were advised not to try and see Kiwi, as that would be too stressful for him. For a week Dr. Don force fed Kiwi with peanut butter, metamucile and banana each hour. A week later, we met Kiwi and Dr. Don to get him x-rayed, and there was one happy Kiwi to see his mom and dad again. He pecked and pecked at us, first me and then Steve, and squawked a happy squawk. I just cried and held him so tight to me. The x-ray showed the metal was gone. But we couldn’t take him home with us. He had to undergo more treatment and start eating birdie food all over again.

More treatment was needed as the test results from N.C. came back showing signs of recent exposure to Chlamydia and Aspergilloses fungus. Treatment had to be put into orange juice and put in Kiwi’s mouth twice a day with a syringe. He had to be treated for 45 days. Clamydia psittaci (parrot fever) bacteria responds to antibodies. It can cause death within 48 hours or can survive in a bird for 10 years causing no signs of illness but is contagious to other birds and humans too.

Monday morning Dr. Don called and said that Kiwi could come home. If Steve could meet him part way, he could go home right then. Otherwise it would be afternoon before he could get him home. I called Steve at work and told him. Of course, he said “no problem. I’ll pick him up right now”. He left work, met Dr. Don and brought our baby home. And one happy, still sick but happy, birdie he was. Steve said that he chatted all the way home.

Kiwi got in his big cage and was very tense. He wouldn’t sleep in the afternoon and was very jumpy. I just spent the day talking to him and explaining to him that he was going to be all right and that we were taking care of him. He would start to eat a bit and back off, but finally did eat.

By 6:30 I sang to him and got him ready for night night and he went down and we never heard from him till 8 am. He was back on schedule.

Dr. Don had Kiwi on a different diet of pasta, fruits and veggies, pellets and other food. He apparently was liking this diet, so I kept with it and he still eats the same foods. When he gets up he gets pellets with orange juice and applesauce in it, then when he goes for downtime at 9:30 am and in the afternoon, he gets a mix of peas, corn, mixed veggies, mixed pastas. He gets a walnut for a treat at night and has a twig of millet hanging in his cage.

Dr. Don had to take another blood test in September and another at the end of the year. They both came out negative. Kiwi will continue to get a blood test and feather and poop sample each year for his physical. That will give us a very good indication of how Kiwi is doing.

We never did find out where this piece of metal came from. It could have come from a toy or from something he picked up on the floor or helping his dad. Kiwi loved to play with the nuts and bolts when Steve was working in the house. The most important thing is always see what your bird is chewing and that it is not harmful. Do not allow any zinc or lead around where your bird can chew on it. And remember to watch him like a 2 1/2 year old child – as that is what you have in your home.

Now that Kiwi is well once again we are much more careful about where he runs. He is not allowed to be out on the ground outside and we have run string across our courtyard where he is allowed to play on his condo.

I hope no one has to go through this. You can save your birdie if he gets sick, but you must get him to a vet fast. They do not last long after sickness sets in. The cost to us was very high, but it was worth every penny of it.