Parrotlets are one of the smallest species of parrot in the world with their closest relative being Amazon parrots. Most species are less than 5″ in length and weigh less than 30 grams. Parrotlets are tiny, streamlined parrots with wedge-shaped tails and large beaks for their size. Primarily green, patches of yellow, gray and blue identify the species, subspecies and sex. When the males and females in a species look different, they are called dimorphic. Identification of the male of a species is made upon the particular shade and location of blue he possesses. Being more difficult to identify, females are generally identified by their size, conformation and coloring, because they lack the blue of the males.

Information on caring for parrotlets can be found in my companion article Parrotlets in Aviculture – Caring for Your Parrotlet.

There are seven different species of Forpus parrotlets. They are all found in either Central or South America and Mexico. 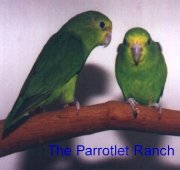 Of the rarer parrotlets, Blue Wings (Forpus xanthopterygius) are the most common. Blue Wings are larger than Pacifics, weighing 35 grams or more and close to five and one-half inches in length. Males and females have gray beaks and legs. Males have blue violet wings, backs and rumps.

Slightly smaller and bright apple green, Green Rump (Forpus passerinus) parrotlets range from 18-28 grams (depending on the subspecies) and from three and a half to four and a half inches. As with Pacifics, Green Rumps have pink feet and beaks as well. Male Green Rumps have dark cobalt blue and bright turquoise on their wings but no blue on the back or rump (except on one subspecies). They are the only species of parrotlet in which the males have green rumps instead of blue. Females have bright yellow on their faces between their eyes. There are five subspecies of Green Rumps; three of which are found in the United States.

Forpus passerinus viridissimus, is found on the islands of Trinidad and Jamaica, as well as northern Venezuela to northern Columbia. The males are a darker forest green than the nominate and the females have much more yellow between their eyes. This subspecies is fairly common in the United States.

Another subspecies found in the U.S., is Forpus passerinus deliciosus. Native to northern Brazil along the banks of the Amazon, this subspecies is the smallest, weighing only 18 grams. Bright apple green, the males are the only green rumps to have a light turquoise-blue wash of color over their rumps. Aside from being very tiny, the females are no different from the nominate.

Green Rumps generally have sweet, gentle personalities, which makes them good birds for children. Although not as stubborn as Pacifics, they can be frightened by new things. They may also take a few days to settle into their new surroundings and begin eating a wide variety of foods. However, once settled in, they have just as much personality as their more boisterous cousins and are much less insistent in getting their own way. Green Rumps are native to Venezuela, Brazil, Guyana and the Caribbean islands.

Mexican (Forpus cyanopygius) parrotlets are also on the large size, being five and one-half inches and approximately 40 grams. Mexicans are bright green and males have gorgeous bright turquoise wings, backs and rumps. Both males and females have gray beaks and legs but females’ beaks do not turn gray until they are in breeding condition. Mexican parrotlets are an enigma in the world of parrotlets. They are the only species that can be bred in a colony. Unlike the others, they have a set breeding season (usually spring and summer). They are the most northerly-found species, as the others come from South and Central America.

Of all the species, Mexicans are the ones in most need of being bred in captivity. They live in an area of Mexico that is being harmed by habitat destruction and are often smuggled. Naturally, this is devastating the wild population. Unfortunately, very few people are breeding these birds. Because of this situation, the International Parrotlet Society is sponsoring a breeding cooperative in an attempt to save these magnificent parrotlets. There are three subspecies of Mexican parrotlets.

One subspecies, Forpus cyanopygius pallidus, is found from southeastern Sonora to northwestern Mexico. In both males and females the plumage is lighter green with a gray tinge and the under parts are more yellow than in the nominate.

Forpus cyanopygius insularis is found only on two of the Tres Marias Islands, and is believed to be greatly endangered. This subspecies is identified by a dark green head, back and wings as well as blue-green under parts. The face is yellow-green and the males’ rumps and wings are darker turquoise than in the nominate. 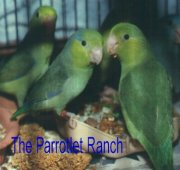 The most widely kept pet parrotlet is the Pacific or Celestial (Forpus coelestis). Approximately five and one-half inches in length and averaging 28 grams, these bright olive green birds have pink beaks and legs. They are found in the wild on the Pacific Ocean side of the Andes, western Equador and northwestern Peru. Males have deep cobalt wings, backs, rumps and a streak behind the eye. Females are various shades of olive and emerald green with no blue and an emerald green eye streak. Both males and females have pink beaks and legs.

There is one subspecies (Forpus coelestis lucida) where the females have blue rumps and eye streaks and, sometimes, wings – although it is not as dark blue as the males. Males of this subspecies have silver gray backs and wings as well as an eye streak that completely encircles the back of the head. This subspecies is found in Columbia. Both males and females have bright, lime-green faces with pink beaks and legs.

Pacific parrotlets have the most outgoing and feisty personalities. However, they are also very affectionate and bond strongly with their owners. Pacifics can be very stubborn and strong-willed and can quickly learn to get the upper hand with their owners. They need to be taught limits and commands to control their behavior so they will stay sweet, wonderful pets.

In captivity, color mutations are highly desirable. Many are breathtakingly beautiful. There are many color mutations of Pacific parrotlets. These include blue, dark blue, yellow, cinnamon, fallow, lutino, albino, white, dark green and blue-fallow. So far, there is only one color mutation Green Rump and that is yellow with dark eyes.

You can read more about these mutations in my article Color Mutation Pacific Parrotlets.

This species is currently being bred in Europe and is not available in the United States. The Sclater’s parrotlet (Forpus sclateri) is reported to be approximately five inches in length and is found in French Guiana, Guyana, Venezuela, Brazil, Ecuador, Peru and Bolivia. The males’ lower back and rump are a deep violet blue which is darker than in any other species. The primary and secondary coverts, secondaries and under wing coverts are also blue violet. The upper mandible is gray and the lower is horn colored. The legs are grayish brown. Females have no blue markings, with their general plumage being paler than the male. The forehead, crown and cheeks are yellowish green. There is one subspecies in addition to the nominate.

Spectacle parrotlets (Forpus conspicillatus) were unavailable in the United States until the fall of 1992 when several pairs were imported from Belgium. In the wild they are found in Panama, Columbia and Venezuela. These striking parrotlets are one of the most beautiful species of parrotlet. Males are a deep, rich evergreen with a bright blue eye ring, cobalt rump, primary and secondary coverts, secondaries and under wing coverts and bright violet blue on the primaries and rump. In females, all blue markings are replaced with emerald green. The upper parts are a brighter green than in the male and the under parts are yellow-green. Through a successful breeding cooperative sponsored by the International Parrotlet Society, there are now hundreds of these beautiful little parrotlets available as pets. There are three subspecies of Spectacles that can be found in Panama, Equador and Columbia.

These tiny gems have very outgoing personalities. Spectacles are very inquisitive and make delightful pets. Although fearless and bold, they are not as stubborn and feisty as Pacifics. They have an easygoing nature similar to Green Rumps. Spectacles make great pets and seem to be the best talkers. Unlike Pacifics and Green Rumps, both males and females often learn to talk. Spectacles are voracious eaters and will consume just about everything offered to them. They are especially fond of fruits and vegetables and will eat huge amounts in proportion to their tiny bodies. Spectacles eat even more than Pacifics.

The rarest and largest species is the Yellow Face parrotlet (Forpus xanthops) weighing 45 grams and almost six inches in length. These large birds seem more closely related to lovebirds rather than parrotlets. They are found only in one extremely remote valley in northwestern Peru. The males have deep violet blue primaries and secondaries similar to male Pacifics including the blue eye streak. Females also have blue rumps which are lighter than the males. As the name implies, both males and females have bright yellow faces. They also have horn-colored legs and beaks with a dark stripe running down the front of the upper beak.

Yellow Face parrotlets are extremely rare in the United States. It is believed there are less than 20 pair in the entire country. However, they are readily bred in Europe and captive-bred birds should be allowed to be imported into the United States to help preserve the species. The International Parrotlet Society sponsors a breeding cooperative and is working with the U.S. Fish and Wildlife Service to allow importation of captive-bred parrotlets.