When I first became interested in birds, my idea of the perfect bird was a gleaming white cockatoo or a brilliant blue and gold macaw. The romantic images of these birds lingered in my mind. Despite the fact that my “little birds” (parakeets and later, a parrotlet) kept me entertained for hours, I longed for a big bird.

We lived in an apartment at the time, and I feared that my parrotlet’s chirps might be too loud for our neighbors. So, I held onto my dream of a big bird, researched the different bird species, and hoped for the day when I could finally have a “big bird”.

The day arrived at our local bird club’s May sale. I went to browse, as I usually do, and came face to face with my true love — a blue headed pionus. He was hanging in his cage along with a couple of dusky pionus. Next to him, a group of Maximilian’s bumbled and played in their cage. I fell in love. I rushed home, then proceeded to cry to my husband about how much I wanted this bird. It’s a good thing, because Braynon, and his buddy Sam, a white cap that I received this past Thanksgiving, have captured my heart.

Pionus have lots of personality. There is simply no other way to describe the way that these medium sized birds grab onto your heart and never let go. Sure, some like pionus due to their relatively quiet nature. The fact that these birds take most everything in stride, also doesn’t hurt their appeal. Their medium size means that cage requirements are not excessive, and while these birds do delight in making messes, they usually don’t throw food as far as the larger birds.

The Blue Headed Pionus and Maximilian’s are the two species noted for talking. The speech ability of the pionus parrot usually does not include the large vocabulary that you would see in an amazon or an African Grey. Speech clarity varies from words that only a mother could understand to perfectly clear speech. Sounds, such as beeps and whistles are a favorites.

Pionus need a cage at least 24x24x32 with 3/4″ bar spacing. For the larger species (Blue Headed or Maximilian) the spacing can be increased to one inch. Provide lots of toys for your bird. My birds enjoy swinging on their toys and chewing. The “nut mazes” by Jungle Toys and the “JungleJoy” by Lafaeber are two of my birds’ favorites. These birds can be as inventive and entertaining as other species of parrots.

Since pionus are gentle birds, they lend themselves to lots of “cuddle” time outside of their cages. These birds will never be “love sponges” and may even appear standoffish at first. However, they enjoy sitting on a perch, watching their owners go about their daily activities, or sharing time for head scratches and speech training.

Pionus parrots also share a unique stress response. When frightened, these birds will wheeze. It sounds as if the bird is having an asthma attack. Although it may be distressing to hear, the wheezing sound will end once the offending object or person backs away.

Pionus are also beautiful birds. All pionus share red tail coverts (underneath their tail), giving them the name “red vented parrots.” In addition, all pionus need to be either blood or surgically sexed, as it is impossible to tell the sexes apart.

There are eight different species of Pionus parrots. Of these, five are commonly available in the pet trade. Although the general body shape and size of these parrots remains the same, their coloration differs from species to species, sometimes quite drastically.

My first pionus, Braynon, is a Blue Headed Pionus (Pionus menstruus). These birds are 11 inches tall. Their beak is black, with a red spot on either side of the upper mandible. Their head is a rich dark blue, although full coloration isn’t reached until one to two years of age. Their body is subtle shades of green, and their ear coverts are black. Their feet are dark gray to black. Sometimes, these birds have a few pink feathers beneath their chin. Juvenile birds look much the same, except that their head has less blue and more green. As the young birds molt, the green turns to blue.

Blue Heads have been known to speak. Braynon has a vocabulary of about 20 words and phrases. This species is one of the most common pionus seen in the pet trade, and depending on location, can cost between $300-$500. 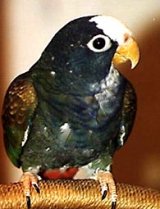 My next pionus, Sam, is a White-Capped Pionus (Pionus senilis) also known as the White Crowned Pionus. White-Caps are approximately nine and a half inches long. These smaller birds have white on their forehead, forecrown, chin, and throat. Their breast is an olive-brown edged with a darker blue, that gradually becomes green across the abdomen. The top side of the wings can have violet-blue, green, blue and golden-brown feathers, with the undersides of the wings a dull green. The beak is horn colored, and the legs and feet are pink.

Personally, I feel the White-Capped demonstrates some of the brilliant coloring that these birds have. These birds are readily available in the pet trade and can cost from $175-$400.

The last species of pionus common to the pet trade is the Maximilian’s Pionus (Pionus maximiliani). Not only the largest pionus, at nearly twelve inches long, the Maximilian’s is the other pionus that can readily be taught to speak. At first glance, you may think this bird the most plain, but a careful look at its plumage will show that while the body is mostly green, a light blue edges the feathers at the throat and chin. They also have white shading on their head, making them known as the Scaly-headed parrot. Their beak is horn colored, and they have gray legs. Young Maximilian’s have paler coloring than the adults. These birds cost from $200-$600.

Aside from my own birds, I feel the Bronze Winged Pionus (Pionus chalcopterus) is the most beautiful. These birds are 11 inches long, and their plumage appears to be a subtle violet-blue. However, their wings are dusted with bronze, and a shading of pink, purple-blue, and bronze-green covers the body. Their beak is horn colored, and their legs are light brown to pink. Like most pionus, the immature birds have much less color.

Bronze Wings are not quite as wide spread in the pet trade, but these birds are well worth the hunt. You can purchase a Bronze Wing from $300-$850.

The final pionus that is seen in the pet trade is the Dusky Pionus (Pionus fuscus) also known as the Violet Pionus. These birds are about 10 inches long. Their coloring is a slate blue color, although from afar they may look like muddy charcoal. The feathers of the neck and throat are streaked with white. And their breast and chin is dull pink. Some say that these birds remind them of peregrine falcons. Their beak is dark gray, as are their legs. The price for a dusky pionus ranges from $400-$600.

I cannot imagine what my life would be like without my two Pionus. These birds have brought me the joy of a “big bird” along with a quiet and gentle nature.