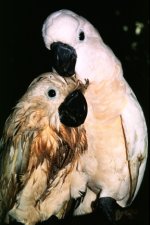 Perhaps you’ve heard of Dr. Charles Munn’s Tambopata Research Center in Peru where macaws are the center of attention? Tourists go there from all over the world to trek through the Amazon rainforest and enjoy the flora and fauna of one of the most biodiverse areas of the planet. They are guided by birdtrappers who’ve given up birdtrapping and smuggling to become forest guides and help benefit the visitors to their native jungle by sharing their vast and intimate knowledge of the rainforest canopy. Well, even if you haven’t heard of Tambopata Research Center, perhaps the idea might sound familiar because a new venture called Project Bird Watch (PBW) has sprung up in the nearby Moluccan, or Spice, islands with the same intent in mind. 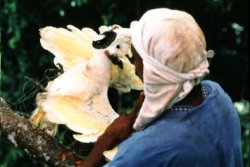 It all began in April of 1998 when Damian and Djuna Ivereigh visited Seram, an island in the Malaku province of Indonesia, and found themselves unwilling witnesses to the illegal bird trade there. Befriending the villagers of Sawaii and Masihulan on Seram’s north coast brought them to the front lines of this heinous trade. They convinced the villagers and birdtrappers there to not only cancel the logging contract they had made to have their forest clearcut, but also to give up the trapping of exotic parrots such as the Salmon-crested cockatoo, or Moluccan cockatoo (an endangered species), the Eclectus parrot, the Great Billed parrot, several species of lorikeets, and other types of birds many of which are indigenous to Seram.

Hatching of a Bird Project

A canopy platform was built to haul guests-ecotourists-up for a stunning view of the surrounding countryside and the trappers-turned-guides became resident experts on many matters of import regarding their home village and its nearby forest. And so Project Bird Watch was born. However, it would not last for long. As you have most likely heard, political unrest in this area has now forced many of these villagers into the forests to hide and even in this very remote region of Seram, villagers have lost their lives in Christian-Muslim conflicts. These conflicts, which may have been artificially created, have spread from island to island in Malaku province over the last 10 months. Regardless of the source of unrest, ecotourism is no longer a viable source of work for anyone in Seram or on nearby islands.

During the period first following unrest in the summer of 1999, the Grameen Bank of Seram (GBS) was founded by Damian Ivereigh to follow the model of the Grameen Banking system in Bangladesh. Villagers with no collateral were able to get small loans to start up their own businesses so they would no longer be making money trapping parrots. This saved the lives of many parrots who either would have died in the trap or died after capture on route to the bird markets of Ambon and Jakarta. The Grameen Bank of Seram is an “offspring,” so to speak, of Project Bird Watch and funds are shared between the two depending on highest need.

Stepping Back and Widening Focus

Project Bird Watch now faces the possiblity that it may be many years before the political situation in Indonesia is stable enough to provide the right environment for ecotourism. However, the Grameen Bank of Seram, continues to function in the aforementioned capacity and will continue to do so. In light of the regional limitations PBW has recently faced, the focus of this organization has shifted dynamically to address the need for education regarding the unsustainability of trade in exotic birds worldwide, including the need for its abolishment. In effect, Project Bird Watch shifts from a few tourists in the rainforest birdwatching to an organization with a more global perspective, watching after the birds of the entire world.

PBW is also dedicated to addressing the current state of captive wild-caught Salmon-crested or Moluccan cockatoos, who, in many cases, live in deplorable conditions due to their unadaptability as pets. Domestically bred Moluccan cockatoos, which are numerous in the United States and some parts of Europe, make loving pets but are a very difficult parrot to keep as such and require a special breed of human to put up with the noise, dust, and destruction. The lack of a good match between Moluccan cockatoo and human often results in a homeless, unwanted, or abused bird.