I have not been a bird owner and breeder for a large number of years, but I discovered early on that giving my birds a good diet could be expensive. By taking advantage of nature’s bounty, I have found that there are many ways to reduce my bird food bill without sacrificing the quality of their diet. One of the ways that I save on their food bill is by taking advantage of free or inexpensive pumpkins when in season.Foods containing pumpkin can make a significant nutritional contribution to the diet of parrots and other birds. Pumpkins and pumpkin seeds contain high amounts of vitamin A, as well as calcium, magnesium, potassium, phosphorus and other nutrients. Bread with pumpkin added and soft food mixes containing pumpkin, as well as shelled or unshelled raw pumpkin seeds are a big hit with my birds. I prefer feeding fresh pumpkin rather than the canned pumpkin available in supermarkets. Also, raw pumpkin seeds have recently become prohibitively expensive. They cost $5 a pound in some of the stores in my area.

Last year, I was asked to help transport some leftover pumpkins after a church’s pumpkin patch sale ended. When I got there, someone had already removed all of the pumpkins. I stopped at another pumpkin patch and was told that they were looking for a farmer to give the unsold pumpkins to after the sale ended. We discussed what I would do with them and they gave me more than 80 good pumpkins. They asked me to come back this year to get their blemished and unsold pumpkins. I took the pumpkins home and prepared and stored them last year. By processing a few at a time, I was able to use most of them. I gave away the ones I could not use.

Some organizations, and even some stores, will give away imperfect pumpkins slated for sale as Halloween or Thanksgiving decorations. Stores will give you the leftover pumpkins rather than putting them in the landfill; however, you must ask for them. Vendors do not volunteer them initially. Some stores have rules about giving away produce so you might need to offer them a small amount to *buy* their unsold pumpkins.

Since I had volunteered to take the left-over pumpkins last year, vendors contacted me to dispose of their extra pumpkins this year. One vendor offered me 300 surplus pumpkins! This was someone that I did not even know. They learned of me from the people who had given me their unsold pumpkins in 1998.

To process them, I cut pumpkins in half and remove the seeds. I wash the seeds well. This involves rinsing them over and over again.

Then I spread them on cookie sheets to dry. Putting them in the oven on the warm setting speeds this process. Once they are dry, I place them in gallon-sized freezer bags and store them in the freezer until I am ready to feed them to my birds. I found that 8-10 pumpkins will yield one gallon of seeds.

After removing the seeds, I cut the pumpkin halves into wedges and remove the tough skin. I rinse the slices and put them into gallon-size freezer bags and freeze them for later use in bird bread.

Blanching the pumpkin slices before freezing would be better, but I do not take the time with the huge number of pumpkins I have to process. When I am ready to use them, I cut the slices into small pieces and add them to the bread mixture. The birds love it! This year, I cooked some of the wedges in my big crock pot to reduce the volume before freezing. My husband helped me with the slicing and cubed some of them so I do not have to do more work before cooking. Pumpkin adds moisture, flavor, and fiber to bird bread.

Another benefit is that my peafowl love to clean the pumpkin halves. I cannot use all of the pumpkin flesh due to limited freezer space, so there are many left to dispose of. I found that the peafowl will clean them down to the skin when I put them in their pens. Also my llamas will eat the pumpkin flesh. I recently saw our donkey eating some too.

These pumpkins have been a wonderful addition to the diet of all of my critters, and best of all, they were free! 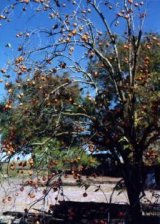 An over-abundance of fruit on the trees in neighbor’s yards is another source of free food for birds and other animals. Recently, I was driving home and noticed a tree loaded with orange fruit. I had not noticed it before that day. I was not familiar with the fruit on the tree so I read the name on the mailbox and called when I got home. The owner told me that they were persimmons and said for me to come and take all of them if I wanted them. I was not sure if they were safe for my birds so I asked around and learned that some people do not consider them a safe fruit. However, many people have been feeding them to their birds for years without a problem. One thing is essential–the persimmons must be completely ripe. The bitterness of an unripe persimmon could convince you that it is poison!. It might give you a “permanent pucker”!

I do not feed the persimmons raw to my birds. I cook them into the bread that they love so much. I squeeze the flesh and juice of the persimmon into the batter and I do not use the skin of the fruit. The skin might be another reason people do not believe it is safe. None of my birds have refused to eat the bread containing persimmons. My son’s Cockatiel wears it proudly on his face!

Use your own judgment about feeding this fruit to your birds, but it has been another source of free bird food right off the tree for me. I took about 50 pounds of persimmons off one tree and it did not make a dent in the amount left hanging on the tree.

We all can find numerous ways of feeding our birds nutritious foods without spending a lot of money if we are on the lookout for surplus food. Most Florida residents know someone who gives away bushels of citrus fruit grown in their yard every year. Many gardeners are happy to share their extra produce with anyone who will come and gather it.

One of the favorite fruits of nearly every parrot species is the pomegranate fruit. Those of us fortunate enough to live in areas where pomegranates grow have a gold mine growing somewhere nearby. They do grow in my home state of Texas, but the fruit is not as beautiful as the poms grown in California. Each area of the country has fruits and vegetables that you can obtain free or at very good prices when they are in season–just look around.