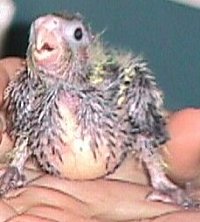 One of the most common digestive problems of cockatiel neonates is sour crop. There are a number of reasons why sour crop occurs and it might be helpful to look at them in order to understand why sour crop happens to chicks. This is a picture of a Cockatiel chick with a very full crop.One of the most common reasons is food that is fed to the chick is too cold. The cold food in the crop tends to drain off the chick’s body heat and this in turn will shut down the chick’s digestive system. Remember that young chicks do have problems with thermal regulation. Cold food will only serve to hasten crop stasis. Another very common reason is that environmental temperatures are too cool for the chick and the chick becomes chilled. If the chick is chilled all the chick’s body heat is used in an attempt to keep the chick warm and there isn’t any energy available for the digestion of the food. Food transit time within the chick’s digestive system tends to be affected by diet and the environment. The correct temperature for feeding the formula plus the correct temperature within the environment are keys to having the digestive system of the chick working properly.

Food that is fed too hot can cause crop burns and damage the crop. Ideal formula temperatures for feeding cockatiel chicks are between 105-107 degrees Fahrenheit. These higher temperatures are best checked with a digital thermometer. Using the inside of the wrist to measure formula temperatures is risky and inaccurate. Eventually your wrist will desensitize to the feel of the warmth of the formula and you risk serious burns or feeding food that is too cool for the chick.

When formula is fed that is too high or too low in solids, sour crop can occur. Excess dietary protein or fat may cause the digestive system to slow down. The consistency of the formula fed must be appropriate for the age of the chick. If the food that is fed is too thick it may result in severe dehydration which could quite possibly claim the life of a very young chick. Water is essential to life and is needed by the cells for metabolic activity. Dehydration of the chick is often one of the results of crop stasis. Once dehydration has occurred, the chick becomes critical very quickly. Fluid replacement is then an absolute necessity and may need to be given to the chick so that the life of the chick can be saved. An overly rich formula will cause the slow down of the digestive tract and may result in sour crop. Overly thick formula doesn’t have enough water to allow the food to pass through the digestive tract, but instead may cause the chick to dehydrate leaving behind a doughy mass of food in the bottom of the crop.

A breeder may over feed the chick and as a result over stretch the crop. The crop then looses its elasticity and muscle tone. This can prevent the crop from emptying properly on its own, thus allowing food to sit in the bottom of the crop and sour. If the crop is over stretched a crop bra can be used to assist the crop in emptying.

Another source of crop stasis is a foreign body in the crop or the crop becoming impacted by the chick eating nesting substrate.

Sour food in the crop is the major cause of crop stasis. Usually the old food sits and ferments in the bottom of the crop. As the food becomes more sour the crop emptying time gets slower and slower. Fresh food that is fed on top of already sour food will sour much more quickly. Fermentation increases the bacterial growth within the crop and may result in a bacterial infection along with a secondary yeast infection. It is then advisable not to feed more food on top of food that is already sour.

The crop must empty completely once every twenty-four hours. If the crop does not empty completely, this is a red flag indicator that sour crop could be developing in the chick. At this time I either try a quarter teaspoon of baby Applesauce or a quarter teaspoon of papaya concentrate added to the handfeeding formula. Most often I find this immediately resolves the problem and the crop returns to emptying normally. At the same time I closely monitor the temperature of the formula and feed at the higher temperatures to increase the gut transit time. Always check the formula with a digital thermometer.

Now what can you do if you have a chick with sour crop. First and most important you do not want to feed more formula on top of that already sour food. You will want to get some unflavored Pedialyte (electrolyte replacement fluid) and feed small amounts, usually about two to four cc’s depending on the age of the chick every two hours for the next twelve. At each feeding you will want to very gently massage the crop, making sure not to push up on the crop. Pushing up could cause the chick to aspirate food. This is a serious problem and can result in aspiration pneumonia or death. Critical to resolving this problem with sour crop is the formula temperature should be at least 105 degrees Fahrenheit. 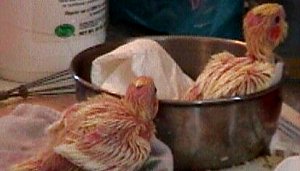 If the crop refuses to empty with the institution of these measures, I would immediately consult my avian veterinarian. Hand fed chicks become critical very quickly and often need subcutaneous fluids in order to save the chick’s life. There are many other factors that can cause crop stasis. Some of these are viral, bacterial, yeast infections and systemic diseases. It is best to consult with your avian vet if you are unable to resolve your chick’s sour crop problems within the twelve hour time frame. An avian professional will be able to diagnose the cause of your chick’s sour crop and can institute life saving measures. Dehydration is a life threatening result of sour crop and requires immediate emergency medical attention.