Considered by many to be the most beautiful of the commonly available conures, the sun conure has enjoyed an elevated popularity status in the world of companion birds for many years — and with good reason. Their multi-faceted personalities will delight even the most experienced of bird lovers, and their breath-taking coloring will attract the attention and pique the curiosity of any non-bird person! If there’s one conure that people will recognize on sight once they’ve seen one, I’d have to say it would be the beautiful sun!

Hailing from the northeastern coast of South America, sun conures are approximately 12 inches in length, including their long tail. Their body build is slender, and their feathers are bright, iridescent shades of orange, blue, yellow and green. Unlike some other species which have definite coloration patterns, the sun conures sometimes have a combination of these colors over almost any part of their bodies. Young suns tend to have feathers which are predominantly green, while older birds sport more of the yellow or reddish-orange. This change of feather coloring from green to the brighter oranges, golds and yellows is most noticeable on the back, abdomen and head of the bird as it matures. General plumage is yellow and green while the cheeks, forehead, abdomen and down to the lower back are tinged with bright fiery orange. The outer webs of the primary flight feathers are a deep blue while the primaries are bright green; the secondaries are also green. The upperside of the tail is colored an olive-green with blue tips; the under tail-coverts are green with a marked yellow tinge; the median and greater upper wing-coverts are green with yellow edging. All of these colors become brighter and more vivid as the bird matures, with some birds sporting almost totally yellow tones in their body color. The beak and feet are both black.

The personality of the sun conure can best be described as inquisitive and playful. They are active, spunky and curious, and love to play with a multitude of toys. Their antics during play-time are comical, and they are quite entertaining to watch as they jump, swing, and generally have a wonderful time, seeming to proclaim to the world that they are happy to be alive! During play, they seem to prefer wooden toys that can be chewed up since they have strong chewing tendencies, and can reduce a medium-sized wooden toy to shreds in a matter of hours. They also love toys that promote activity and require a high energy level, (as opposed to “puzzle” toys that require work or intense manipulation); such as swings, rings, and long plastic chains to swing from. Bells are also a big hit, and the louder, the better! Toys are wonderful environmental enrichments, and are vitally important for the psychological well-being of any bird, as well as being fun and entertaining. Providing adequate toys and rotating them on a regular basis will prevent your bird from becoming bored. Suns are also active climbers and will hang by one foot from the top of the cage, while swinging back and forth. I also like to provide my suns with vertical chains and rope, as I feel this helps to promote exercise and aids in the prevention of foot problems. Sun conures are also very adept at learning tricks, and can be potty trained with minimal effort on the owner’s part. 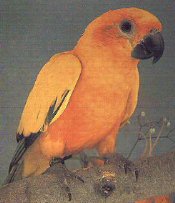 Sun conures love attention, and like to be handled and cuddled by their owners, but many tend to be cautious and reserved with strangers. One trait I have seen in several companion sun conures (including my own two) is the willingness to lean back into their owner’s chest while sitting on the owner’s hand or arm. Both of our sun conures love to do this, and both will also lie very still on their backs in the palms of our hands, turning their heads to and fro so that we can reach exactly the spots on their necks that they want to have scratched! Tame, hand fed suns are very devoted to their owners, preferring attention from their chosen humans above other activities. They also have an elevated environmental orientation level, sometimes having a tendency to be “nervous” or “jumpy”, and stopping their activity to investigate and/or listen intently if they hear any noise. They have a reputation for being the “sentinels” of their human’s home, and are quite adept at notifying their owners of any perceived “intruders”.

The talking ability of the suns is a bit limited although they sometimes can learn to speak several words quite clearly. Their natural call can be loud and raucous, although I personally believe that young, hand-fed sun conures that are raised -away- from and out of earshot of the parents calls do not learn the “scream” that has been associated with the conure family. I base this belief on personal experience; my 3-year old sun conure was hand-fed by myself during a time when we had no other birds in the house except for quaker parrots, and she very rarely vocalizes with that high-pitched “scream” that conures are usually famous for. She does have a “Come Here!” call that is higher in tone than the quaker’s call, but it doesn’t seem to be any -louder-, per se, just higher pitched. On the other hand, nor has she ever learned to utter a single word, despite being cage-mates for the past 2 years with a quaker that has an extended vocabulary.

I always try to stress the prevention of behavior problems, and most especially with this species due to their infamous ear-piercing, and seemingly earth-shattering, screams. A conure that is raised with firm, yet gentle guidance and is taught it’s position in the “flock” at an early age will need minimal, if any, behavior modification when they mature. It is vitally important to their psychological and mental well-being to deal with a companion parrot in ways that will earn their trust and respect, not their fear. Dealing with a bird using negative reinforcement can obviously change an undesirable behavior, but if the bird is responding out of fear of the human, we are doing nothing to earn it’s trust, and the erosion of this vital aspect of the relationship will only lead to additional, and more complex, behavior problems.

Our recently acquired sun conure, Frankie, (2 year old female) was given to me by a caring, concerned woman who kept a multitude of different pets, and felt that Frankie was not receiving the attention that she deserved. Her explanation of why she felt she needed to find Frankie a new home did not include the fact that Frankie was a “screamer”, which I suspect was the main reason for her desperate quest. During the first two days in her new home, Frankie screamed almost incessantly. Since she came to me with a large, roomy cage (along with many toys, food and accessories) I chose to house Frankie in her own familiar cage temporarily. I felt this would lessen the chance of contributing any further to her elevated stress level at being in a totally new environment.

After interviewing Frankie’s former owner again in an attempt to gain some insight into the possible cause of Frankie’s screaming, (at which time she reluctantly admitted that “Yes, Frankie -does- get a bit loud at times”), I concluded that Frankie’s screaming was simply a bid for increased attention. Simply, when she screamed, her former owner picked her up. When the screaming intensified and became more frequent, Frankie was eventually moved to an empty bedroom with the door closed, where she had remained for a week. At this point, the owner contacted me, and requested that I take Frankie into my home.

Behavior modification techniques were initiated immediately. Frankie’s schedule was the same as my other companion birds, and we began socialization methods that included all members of the family. This part was relatively easy, since Frankie would accept attention and handling from almost anyone! We responded to her screaming by whispering to her if we were in close range, and by calling back to her if we were in another room. We also use these techniques routinely with our other birds, and I’m sure this helped Frankie’s adjustment since she was very attentive and watchful when we interacted with the others. Under close supervision, we allowed her to play with the other birds on the gym, and gave her one-on-one attention in the evenings, with plenty of cuddling. In less than a week, Frankie’s screams for attention had subsided dramatically. Within 10 days, they had disappeared completely. At present, Frankie is a happy, well-adjusted bird, content with the amount of attention and love that she receives. Her only screams are those that are normally expected: in the morning when we rise, and in the evening; parallel with our other birds.

Because their activity level is high, I would recommend that sun conures be housed in a cage that is 20″ x 20″ with a depth of at least 36″. This allows for adequate placement of food and water bowls as well as 2 perches and at least 3 toys. Be sure that your chosen cage has the correct bar spacing (3/4″ to 1″) for conures, as birds can get their heads stuck between bars that are spaced too far apart, and can break tail feathers and catch or injure their wings on bars that are too close together. A cage that has a play-gym on top would be ideal for added room. Most sun conures love water and don’t have to be encouraged to bathe. Many will utilize their water bowls for bathing as soon as they are placed in the cage, so an extra bowl of clean water offered on a routine basis will most likely to be used to splash in! My suns do not like to be sprayed with a water bottle (though I know of many that do), but will bathe daily if they are provided fresh clean water every morning.

Sun conures are not sexually dimorphic (males and females look alike), and should be DNA or surgically sexed if knowing the gender is important. They are physically capable of reproducing and raising young at the age of 2 years, though their first clutch is often infertile. Suns are well established in aviculture, and are considered by many to be the most prolific of the Aratinga conures. While there is always a pair or two that simply aren’t good parents, on the whole they do a wonderful job of raising and feeding their babies. Clutches usually consist of 4 to 5 eggs, with a normal incubation period of 23 days. Hand feeding this species is easy for experienced hand feeders, and babies usually fledge with no problems at around 50 days of age.

While the personality and characteristics of any bird are individual to their species, my own experiences with the gorgeous sun conure, albeit sometimes complex, has been nothing but positive and I encourage anyone looking for a companion conure to research these personable, fun and feisty wonders of the winged world!