West Nile encephalitis is an infection of the brain caused by the West Nile virus (WNV), a flavivirus commonly found in Africa, West Asia, and the Middle East. It is closely related to St. Louis encephalitis virus found in the United States.

This virus is of special concern to bird lovers because birds are not only susceptible to the WNV, but also act as hosts, thus participating in the spread of the disease.

The Center for Disease Control and other related websites are the source for most of the information in this article. For further information, visit the sites listed at the end of this article.

It is not known how long WNV has been in the U.S., but CDC scientists believe the virus has probably been in the eastern U.S. since the early summer of 1999.

West Nile virus has been found in Africa, Eastern Europe, West Asia, and the Middle East, but prior to August 1999, has never been reported in the U.S. That year, 62 cases of severe disease, including 7 deaths, occurred in the New York area. Genetically the virus is most closely related to the Middle East strains. Wild bird cases, while concentrated in the Northeast, have recently been found along the eastern coast to the north of Florida and as far west as Louisiana.

In temperate zones, West Nile encephalitis occurs primarily in the late summer or early fall. In the milder southern climates, WNV can be transmitted year round.

It is too early to determine the permanent establishment of the West Nile virus in the US. However, the Culex species of mosquitoes survives through the winter in the adult stage and the virus survives along with it.

West Nile virus (WNV) is transmitted in the US by infected mosquitoes, primarily members of the Culex species.

These infectious mosquitoes carry virus particles in their salivary glands. While feeding on susceptible bird species, they infect them with the virus. The virus then multiplies and may cause illness. Birds carry an infectious form of WNV for 1 – 4 days after being infected. Then they develop a life-long immunity.

People, horses, and most other mammals rarely develop the infectious form of the virus and thus are unlikely to become hosts for further transmission.

Mosquitoes contract WNV when they feed on infected birds. Then after a 10 – 14 day incubation period, the infected mosquitoes can transmit the virus to humans and other animals through a bite.

There is no documented evidence of person-to-person, or animal-to-person transmission of West Nile virus.

There is also no evidence that a person can get WNV from handling live or dead infected birds. However, it is recommended that bare-handed contact with dead animals, be avoided. Use gloves or double plastic bags to dispose of a dead animal or contact local health departments. 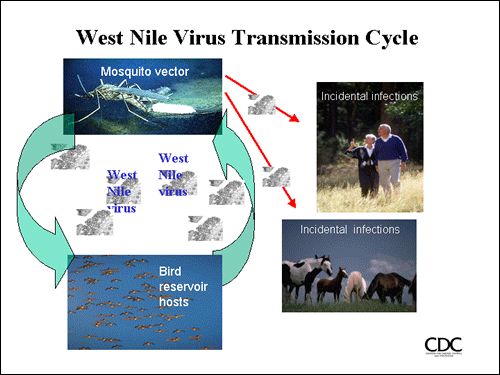 Who can be infected?

West Nile virus has been found in humans, birds and other vertebrates.

Humans can contract the virus and, although rare, it can cause death.

So far 20 native US bird species have had deaths from WNV. Over 190 birds (mostly crows) have tested positive for West Nile virus. Wild birds infected with WNV can die or become ill. American Kestrels and sparrows are two of the susceptible species. Cases of death in young domestic geese were reported in Israel.

At this time, there has been at least one report of infection and death in parrots (a cockatiel found in the wild in NJ), so it is known that parrots can contract the disease. However, it is unknown (by this author) as to whether parrots develop the infectious form of the virus and would be a source for further transmission.

Dogs, cats and horses can also become infected by bites from infected mosquitos. There have been a few documented deaths of these animals, but so far it is believed that dogs and cats have a very low infection rate. It is possible that dogs and cats could become infected by eating dead infected animals such as birds, but this is unproven. The extent to which West Nile virus is present in wild game is unknown.

According to the NYC DOH even in areas where mosquitoes do carry the virus, very few mosquitoes — less than 1% — are infected. The chances that any one bite will be from an infected mosquito are very small. Even if you are bitten by an infected mosquito, your chances of developing illness are roughly one in 150 to one in 300.

West Nile virus can cause a spectrum of illness which ranges from no symptoms to mild illness to fatal encephalitis. Elderly people (over 50 years of age) are at higher risk of developing an illness from infection with West Nile virus than are younger people. Most infections are mild. Symptoms in humans include fever, headache, and body aches, often accompanied by skin rash and swollen lymph glands. More severe infections may include high fever, neck stiffness, stupor, disorientation, coma, tremors, convulsions, muscle weakness and paralysis.

Although rare, WNV can cause death in humans. At its most serious, it can cause permanent neurological damage and can be fatal. Once infected by a mosquito, the virus multiples in the blood and crosses the blood-brain barrier to reach the brain. The virus interferes with normal central nervous system functions and causes inflammation of brain tissue. Case-fatality rates range from 3% to 15% and are highest in the elderly.

West Nile virus symptoms generally occur 5 to 15 days after being bitten by an infected mosquito.

There is no specific treatment. In severe cases, intensive supportive care is needed. This may include: hospitalization, intravenous fluids, airway management, respiratory support, prevention of secondary infections, and good nursing care. There is currently no vaccine.

The infection itself (and any associated illness) is short-lived. A person with antibodies to West Nile virus is likely to have life-long immunity to another infection with this virus.

WNV (Arboviral encephalitis) can be prevented in two major ways – personal protective measures to reduce personal contact with mosquitoes and public health measures designed to reduce the population of infected mosquitoes in the area. These include elimination of larval habitats or spraying of insecticides to kill juvenile (larvae) and adult mosquitoes.

Mosquitoes lay their eggs in standing water around the home. Weeds, tall grass, and bushes provide an outdoor home for the adult Culex pipiens mosquito (the common house mosquito) which is most commonly associated with West Nile virus.

Do not take pet birds outside, especially at the times when mosquitoes are active. Use screens and other methods to prevent entry of mosquitoes into the home. If birds are housed in outdoor aviaries, if possible add screening.

If there are nearby ponds, small wet areas or containers where static (standing) water accumulates, drain them or contact local authorities for information on how to prevent or eliminate mosquito larvae from them. Fill in low areas in the yard and holes in trees that catch water.

The NYC Department of Health suggests that people unclog roof gutters, discard old tires, buckets, or other containers that may hold water (or cover them), change water in bird baths and pet dishes several times a week, and keep swimming pools, hot tubs and outdoor saunas clean and chlorinated or drain and cover them. Dispose of tin cans, plastic containers, ceramic pots, or similar water-holding containers.

Also, turn over wading pools and wheelbarrows when not in use. Cover trash containers. Repair any leaking plumbing and outside faucets. Screen rain barrels and openings to water tanks or cisterns. Keep drains and ditches clear of weeds and trash so water will not collect. Remove standing water from flat roofs. Stock ornamental ponds with fish that eat mosquitoes.