Looking at zebra finches in the pet store gives no indication that there are more than thirty mutations of this common bird. A normal zebra finch has a gray back, with bright orange cheek patches, beak, and legs. Black teardrops fall along the edge of the cheek patch, and a strip of white accentuates the bright beak. His chest has a small black band, then is white or cream. Brown and white spots run just beneath his folded wings, giving the zebra finch a “wild” look. His mate lacks the cheek patches.

From here, Mother Nature has taken her palette of these basic colors, and turned the zebra finch into her own private canvas. Although remaining mostly with the white/cream, black, or tan coloring, the ways in which these colors can be put together boggles the mind of many zebra finch hobbyists.

Much like budgie or cockatiel breeders, zebra breeders have been working to get more mutations. Sometimes, this means importing birds from Europe or Australia. Thankfully, there are breeders willing to do this so that many of these mutations can be available in the United States. Still, there is a myriad of mutations that those of us close to home can purchase.

Zebra finch mutations mostly come in two varieties, the light mutations and the dark. Each mutation has its own supporters and breeders, which makes it fun for the novice finch breeder. Basically, with a little research, a finch breeder wishing to delve into mutations can pick and choose.

The most basic mutation from the normal zebra is the pied bird. While a pied zebra looks mostly like a normal, it has patches of white all over its body. Generally, the belly of this bird remains white, as with most zebra mutations; however, the white shows up where it normally wouldn’t, such as the back or chest. 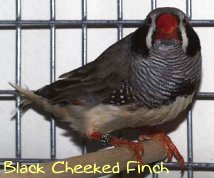 While the exact time and place of the mutation is not known, it came into modern aviculture in the mid to late 1970’s. It is an exciting mutation, with both the males and females sporting black cheek patches. In the females, the patches my not be as bright nor as well formed. Also, the female lacks the black breast bar.

However, one cannot mix all the zebra finch mutations. Because the black cheek is a recessive gene, it is improbable that a Black Cheek x Orange Breasted Zebra would ever be born. 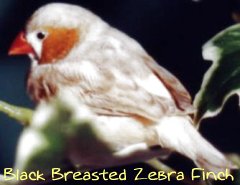 Another beautiful mutation of the zebra finch is the black breast. These birds have a large breast bar and cheek patches, which on a good bird will be 2 to 3 times normal and extend to the back of the head. Their chestnut flanks have elongated white markings, rather than circular dots. The rump and tail coverts are a rich cream, with the tail coverts lacking the standard black and white markings of a regular zebra finch. Female black breasts are similar to normals; however, they lack the black teardrop and have pale colored cheeks, breast and rump.

While the black breast gene is recessive, it is easily detectable in a split bird. Their feathers show obvious markings, such as dots on the tail instead of stripes, which indicate the presence of a mutation.

One of the beauties of black breasted birds is that when combined with other mutations, they can create some beautiful birds. One of the mutations I am currently working on is a black breast x Florida fancy, which will give a Phaeo finch. I’ll discuss this mutation later.

In addition to the black breast, you can also have a black faced zebra. This mutation, despite the similarity of names, is completely different. These birds have a black face, most of the breast and underparts black, with red chestnut flanking that shows few, if any, white dots.

Experienced finch breeder, Gerry Landry notes that this zebra is difficult to breed, with pairs showing varied results. Yet, with most mutations, patience will be rewarded. The black face gene can be combined with other mutations.

One of the cutest zebra finches I have seen is the Penguin zebra finch. Penguins have a dark upper body color with the feathers of the wings and back edged in silvery white. The upper breast and underparts are bright white, with the goal of the breeder to produce a male with absolutely no breast bar. The checks and flanking are bright orange. A female will have white cheeks.

This mutation can be combined with others to produce such exotic sounding birds as a Fawn penguin, a Silver Penguin, and a Florida Fancy penguin.

One of the most striking zebra finch mutations is the Phaeo zebra finch. This bird is not a separate mutation, but a cross between a Florida Fancy and a Black Cheek. The goal is to have a male bird with a completely orange head and breast on a mostly white bird. The color can vary quite significantly, but as this bird is the basis of many other zebra mutations, it is worth the time needed to produce a good one. 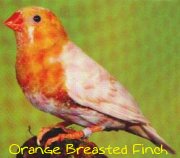 Finally, another orange mutation is the Orange Breasted zebra finch. Ideally, these birds will show all orange where the black breast will show black; however, there are many variations to the coloring of this mutation. One of the most vibrant colored finches I’ve ever seen photos of is the Orange breasted Phaeo.

This is a sampling of some of the mutations of the zebra finch. In another article, I will take a look at the lighter mutations, such as the Florida Fancy, Chestnut Flanked White, and Silver birds.

There are so many mutations to the zebra finch that it is a shame if one only thinks of them in terms of their normal coloring. This bird, like so many other mutated species, can be an excitement for any breeder.