Parakeets are one of the most common pet birds. However, did you know that within the parakeet family there are several ways to distinguish them? For example, within the Australian parakeets we find what are known as colored parakeets.

How did these parakeets come about?

Coloured parakeets are the result of mutations in the nominal species of the Australian parakeet when they reproduce, both naturally and by human hand, with other birds of the same family. 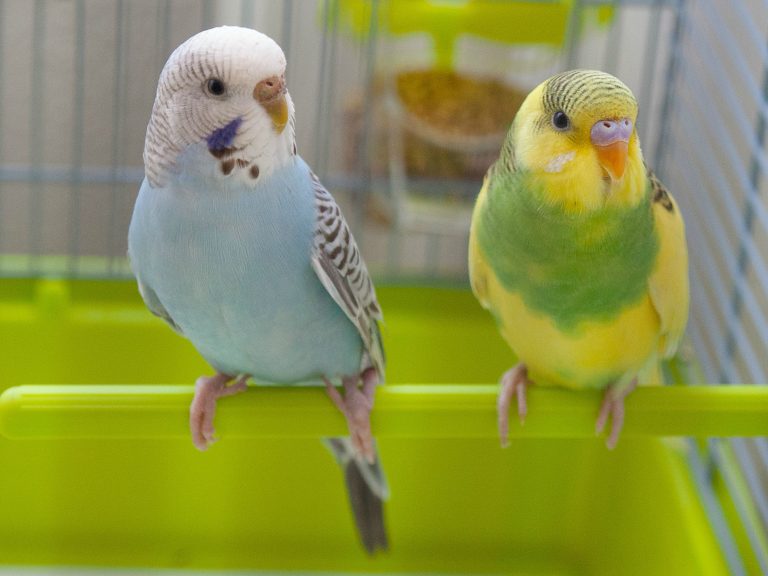 As a result, what are known as colored parakeets, birds that turn out to be quite beautiful to look at, emerged.

How many varieties of parakeet colors are there?

If we simply base what would be the mutations of colored parakeets, we find that there are a total of nine color varieties:

It is also known as flail parakeets, which have a yellow mask, which may also be white, with two violet (or blue) gular spots, in addition to six brownish pearls. The undulations occupy its head, neck, back and wings, which are also a brown color reminiscent of pearls. The remiges also have a brown colour, but with a greyish touch, like the feather on their tail. As a general rule, your body color is yellow-green or blue-white. Their eyes are red and males have waxy pink or bluish pink tones, while females range from bluish white to dark brown.

They are very similar to parakeets, as their feathers are yellow or white, but their eyes are black with white irises.

It could be said that they are identical to the common parakeets, except that their body colour is lighter, both yellow and white, and the remiges and tail feathers are lighter in colour. They’re endemic to Texas.

One could say that it is one of the most relaxed colour varieties in the world. As the mask of his face is black, the pearls of his face are not perceived. In addition, the gular spots are blue, or violet, while the body has light-colored ripples with black plumage.

The mask of his face is white with six black pearls and two dark violet gular spots. The wavy marks on his body are black, with a white background, and the body color is a fairly intense, almost black, bluish-gray tone.

Half of his body has colored lines, but with a vertical line his body is cut by a blue and a green portion. Some specimens may have two different colours on each half of their body.

At first glance they may look like normal parakeets, but after their first molt they begin to appear yellow or white spots on their feathers. They first appear on the dorsum and lower abdomen and gradually spread to the rest of the parakeet’s body.

Do they require special care?

Even if it is a mutation of the nominal species, there is nothing to worry about. The care is exactly the same as for a normal parakeet.

Your cage has to be of a medium size, as they usually measure between 10 – 18 cm, with rectangular or square shape. You know how stressful it is for birds to live in oval-shaped cages or in little houses. And with the bars not too far apart to prevent them from escaping.

The diet consists mainly of canaryseed, with millet, cane, corn… but you can also give him a little breadcrumbs or some piece of fruit and vegetables. To make them live better, it is advisable to add some vitamin complex to the water, so that they can take care of their feathers.