It’s a good thing you’ve finally decided to have a parrot as a pet, but now comes the big question, which parrot are you going to catch? Because if you don’t have a lot of idea, and you want to be guided by our advice, what we would recommend the most is a Eastern Rosella.

What is the habitat of this species?

The Eastern Rosella, known by the scientific name Platycercus eximius, although it is commonly known simply as rosella or multicoloured rosella. It has adapted very well to living with humans, making it the ideal bird.

They usually live in southwestern Australia and Tasmania, but have also been seen in New Zealand that were introduced by humans. It lives in clear forests, in fields of cereal crops and fruit trees, being very common to see in cities.

If there is anything that attracts the attention of this bird, it is undoubtedly how beautiful it is to look at. Their size ranges from 25 to 40 centimetres, as females appear to be somewhat smaller than males, and they have a very striking, multicoloured plumage that combines a red head and neck, a greenish yellow belly and back, blue-black wings and tail, and a slight bluish hue on some feathers. This makes its appearance resemble that of a rainbow.

According to some experts, male and female are the same, but the truth is that when they are adults and in pairs it is not so hard to differentiate them. The female has brown-grey nibs in the eye area, while the males lack these. In addition, the green feathers on the back extend to the crown of the head, something that only happens in females. 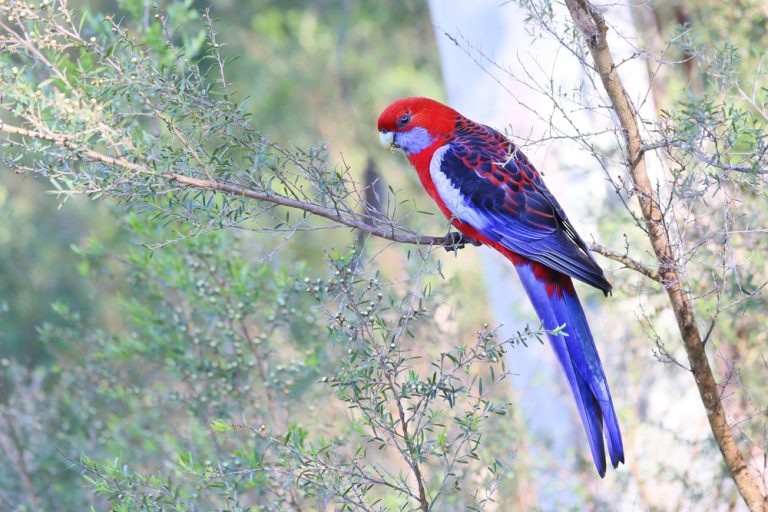 When they are young, it is true that the offspring are more similar to the females, but they differ from the females because the color of the plumage is more matte, and in their head and neck the color green predominates over red.

Apart from the subspecies, over the years breeders have achieved some consolidated mutations, such as the lutinos pastel or cinnamon. In addition, it appears that this species can be hybridized with other members of its own species, the Platycercus.

What do you need to know to keep it as a pet? 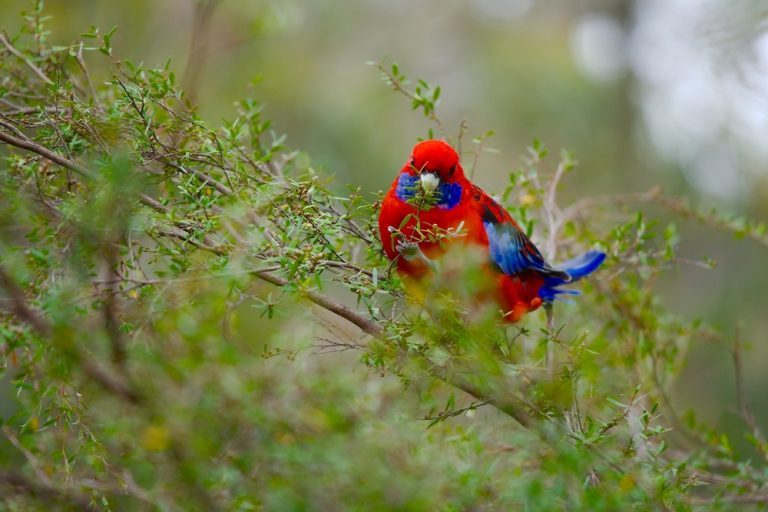 Let’s start with your cage. It is true that many have chosen to raise this bird in the wild, but it is much better to have a cage in which to get used to living. This has to be spacious, 4 meters long x 1.5 meters wide and 2 meters high. This way you can fly inside the cage. In addition, it must be protected from rain and wind inside.

Its feeding could not be simpler, as it is made up of what is known as a mixture and parakeets. But the mixture must be composed of a mixture of parakeets, white millet, red millet, canary seed, oats, breadcrumbs and cane, thus achieving a healthy and healthy diet to take care of your plumage and prevent you from getting sick.

Except on rare occasions, roselle does not require vitamin complexes. Among other types of food that can be given, is moist bread (not to be confused with wet bread), but you must remove them when they have finished eating what they want, because it spoils. But the best option is to give them sliced bread.

Although it is not as long-lived as other birds, it is true that it can live more than 30 years if well cared for, so it will be a companion who will be by your side for a long time. If you give her a good place to live, if the cage is well located and you feed her well, you can enjoy your multicolored rosella for many years and have a good friend to spend your days with.