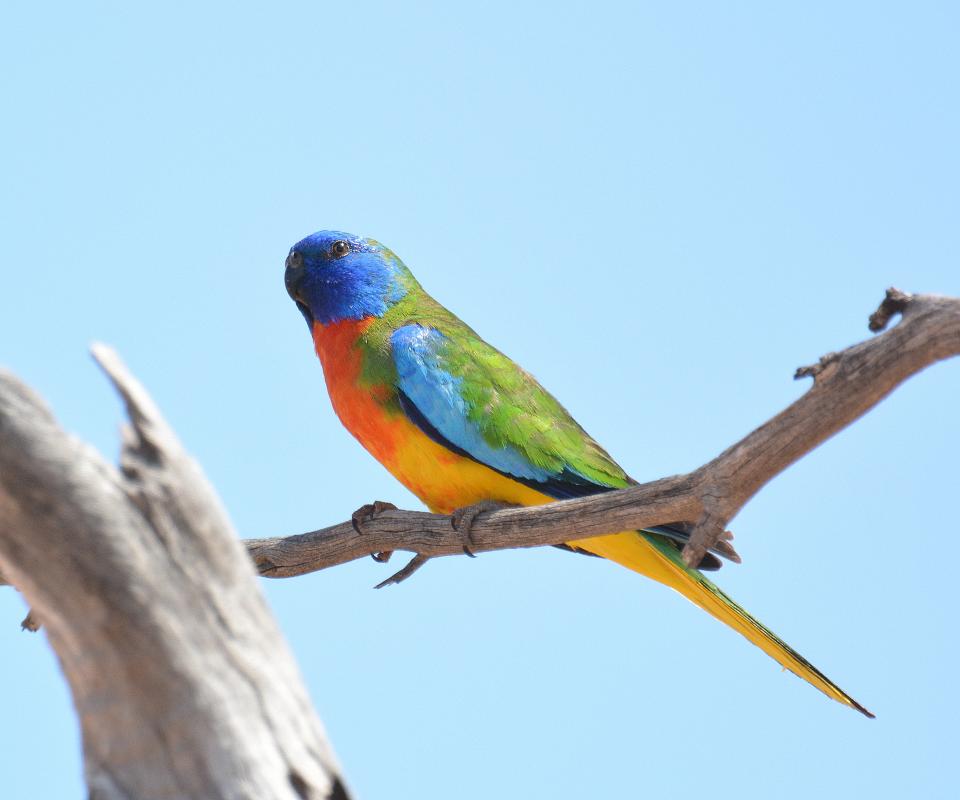 Are you absolutely clear that what you want is a pet parakeet? Now comes the hardest part, which of the variants are you going to choose? Because if you want a recommendation, you should still try the splendid parakeet.

What is the scarlet chested parakeet?

It is also known by its scientific name of splendid neophema, and is characterized by having quite colorful feathers. They are usually distributed in arid scrub that is mainly composed of acacia and eucalyptus.

They may also be seen living in wooded areas that are dominated by causeins, as well as in ground areas that have large blankets of Triodia grass or that are covered by spinifex.

Does he look that beautiful?

Within the parakeet family the truth is that it is not the largest, as it usually measures between 19 – 20 cm and weighs about 40 grams. But if there’s one thing that characterizes it, it’s that it’s quite colorful.

His face and forehead are bright turquoise blue, darkening in the throat and chin area. The upper parts, on the other hand, are light green. The curvature of the wings is dark blue, while the wing coverings are the same colour as the feathers on the face. Primary feathers are black with a light blue wash, while secondary feathers have a greenish blue border. The lower part is dark blue, while the chest is scarlet.

Their beaks are black, with dark brown irises and grey-brown legs. The female has duller tones than the male, and the belly and chest are green and the blue color of the face is restricted, so it is a sexual dimorphism that helps differentiate the sex. The males are the same as the females when they are young, but at four months they begin to obtain their mature plumage.

Due to the mixture of this bird with other birds of the same species, this has resulted in different mutations, which can be found in specimens known as Aqua or Blue in which the blue color prevails, the pale with lighter tones like gray, the Ino whose mutation is recessive sex-linked or pastel tones, but this is not common in Europe.

Is there anything special you need to know for your care?

Not only is it a very beautiful bird, but it is also very easy to keep in captivity. His character is peaceful and silent and he gains the trust of his care over time. One of its major advantages is that it is resistant to cold, but with the glue that it is sensitive to moisture, fog and draughts. Therefore, you should be very careful where you place your cage to prevent you from catching a cold.

One of its peculiarities is that this bird feeds on the ground, where it will have its food, mainly feeds on seeds so it can be given a normal and ordinary mixture for parakeets. This means that the soil must be disinfected from time to time in order to avoid the appearance of parasites that may harm the parakeet’s health.

On the other hand, its peaceful nature helps to ensure that there are not many problems when it comes to relating to other birds of the same species, but it is not highly recommended that it be placed in a cage with specimens that are larger than it is, as it could be intimidated. If they are smaller, that’s okay, because they are not a bird that usually has an air of “superiority”.

Reproduction is quite simple, so any novice breeder could make two of these animals have offspring. Their life expectancy in captivity is usually around 14 years, although getting them to live a little longer would not be impossible. Of the parakeet family, there’s no better companion than this one.