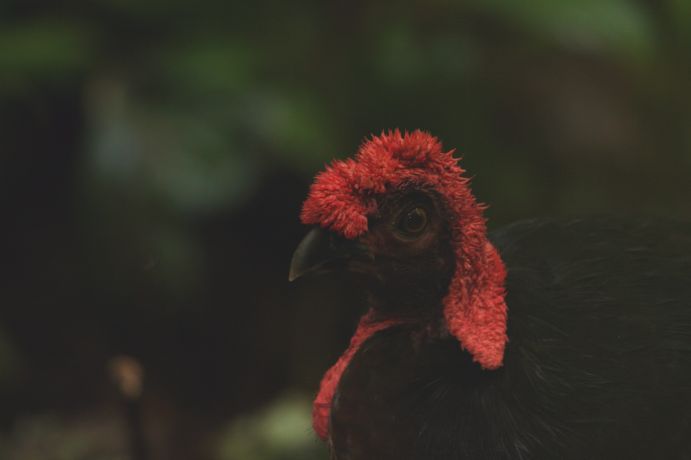 Isn’t it fun to learn something new every day? There is always something new to discover in the world of birds! You’re going to learn things about the Waigeo Brushturkey.

Why is it called that?

This species is scientifically named aepypodius bruijnii, a galliform bird species of the megapodiidae family, endemic to Waigeo Island. Its name pays tribute to the Dutch merchant Anton August Bruijn.

It can only be found in the mountain forests of Waigeo Island, northwest New Guinea, in the province of West Papua in Indonesia.

Is it possible to differentiate between the sexes?

Although it belongs to the talegalo family, it does differ a little from the other members of its family. To begin with, the color of their feathers is not completely black, but the wings are the darkest part of the body. The chest and underparts are a little browner, with the base of the tail reddish and the tips of the feathers black.

His head and neck are featherless and totally red. One way to differentiate the male from the female is that the female has a hairy crest over the crown and two hanging caruncles in the neck area. Its size is usually about 43 cm long, with the male being larger than the female.

The truth is that the situation of this species is not stable. According to IUCN it is listed as an endangered species. One of the main reasons is that this bird has a very limited range, being native only to the island. In addition, its population is quite small, and it is threatened by hunting and habitat loss.

As far as his behaviour in the wild is concerned, he is not very different from the other members of his species. It is a kind of aggressive bird with those who enter its territory. It is true that it can form small colonies, but it will still be aggressive with the rest of the birds in the area.

They build a kind of mound that will serve as a nest for the eggs, which is maintained almost all year round and protected by it. When the time comes for mating, a male will mate with several females and they will lay their eggs in the nest as long as the male consents.

After this work, the male ejects the female from the nest and covers it with a material that helps to maintain the heat. The nest is then heated exclusively by sunlight. During this time the nest is quite unprotected and may be the victim of a predator attack.

The chicks are not born until about a month later, and most of them die from the harsh conditions of the environment. Besides, parents aren’t always around when babies are born.