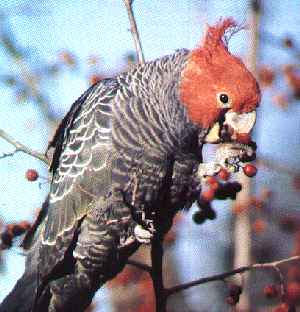 The Gang Gang is dimorphic with the female lacking the red coloured head of the male. Immature birds look like the hen except for some red scalloping of the head feathers in young males, which may be seen even in the nest. 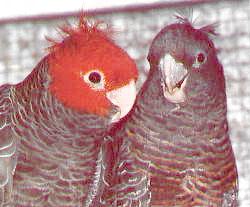 The Gang Gang Cockatoo has a relatively restricted distribution in South-eastern Australia and is mainly found in the higher altitude old growth eucalypt forests. In winter it may move down into lower altitude woodlands and even into settled areas such as Canberra. The seeds of the forest eucalyptus and acacias make up most of the diet, supplemented by other plant material and insects. In summer it is usually seen in family groups but may flock together in winter, especially when feeding amongst berry-laden trees and shrubs. In Canberra in winter it is especially fond of Cotoneaster and hawthorn (Crataegus) berries and flocks of 20 or more are not uncommon.The breeding season extends from October to January, with a hollow high in a eucalypt tree being used. Two, or more rarely three, eggs are laid and both parents share incubation.

Although traditionally linked to the Black Cockatoo group recent biochemical work has shown it to be more closely related to the Galah and white cockatoo group than to black cockatoos. It has been known to hybridise with the Galah, and an example of hybridisation in the wild with an escaped Little Corella has been reported.

The Gang Gang is not widely kept in Australian aviculture. They have a deserved reputation for being difficult to keep and breed, and are particularly prone to feather plucking. This is no doubt in part due to many birds having their origin as wild caught, and with an increase in availability of aviary bred stock, the situation may change.An aviary at least 5 metres by 1.2 metres by 2 metres high is needed, with a hollow nesting log over a metre long supplied. An essential requirement is to keep a constant supply of fresh branches of eucalypts and other native trees available to avoid boredom and hence feather plucking.

The diet needs to be varied, balanced and interesting. A variety of seeds such as wheat, hulled oats, canary (especially good) and millets are provided as well as a wide range of fresh vegetables and fruit. Animal protein is also needed by way of chicken or chop bones, mealworms or other grubs. Cotoneaster berries are particularly enjoyed. Sunflower is generally regarded as bad for Gang Gang’s, causing significant feather and plucking problems. Many pairs seem to have a calcium absorbtion problem and supplementary calcium in the drinking water is often needed as a minimum.

Breeding takes place from October to January with two eggs normally laid, and incubation taking about 25 days. The babies fledge after about 7 weeks, with feeding by the parents continuing for a further 4 to 6 weeks. Inspection of the nest box is often not tolerated, and may result in desertion or even eating of the babies by the parents. The parents may also become very aggressive to their owner at breeding time. Breeding success is rare in the warmer parts of Australia, such as Queensland, with best results coming from the colder parts of the country.

The Gang Gang, if hand raised, would make a wonderful pet, however numbers are so low in aviculture that all birds bred should be placed into breeding programmes to ensure its survival in aviculture.

A pair of Gang Gang’s sell for around $2,500aus in Queensland.