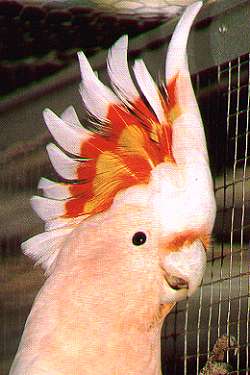 The Major Mitchell sexes are very similar, but can be sexed in a mature bird by the eye colour. A hen has a reddish brown iris while a cock has a dark brown to blackish iris, a distinction which develops towards the end of the first year. 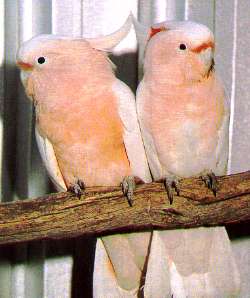 The Major Mitchell has a widespread but patchy distribution through much of inland Australia. It avoids the more arid areas, and also shuns the more humid coastal areas. It may locally be common, but for the most part is relatively rare, and is certainly declining in Queensland where changes in land use have had a significant effect on its distribution. Two sub-species have been recognised, C. l. leadbeateri in the east and C. l. mollis in the central and western parts of Australia. The crest of leadbeateri contains a significant yellow band while that of mollis contains little yellow.The breeding season extends from July to January, with a hollow high in a eucalypt tree being used. Two, or more rarely three, eggs are laid and both parents share nest preparation, incubation and care of the young. The species is territorial when nesting, and requires a territory of 2 km radius around it’s nest site. This behaviour is an impediment to the species increasing it’s numbers in the wild, since there may be several pairs in an area unable to make use of suitable nest sites because the dominant pair will stop the remainder from breeding.

The Major Mitchell has always been a popular bird in Australian aviculture, not surprising given its stunning looks and delightful behaviour. An aviary at least 5 metres by 1.2 metres by 2 metres high is needed, with a heavy gauge wire, and all metal construction. A hollow nesting log over a metre long and an inside diameter of around 30 cm should also be supplied. Breeding success is not easy, finding compatible pairs is often difficult, and mate aggression can be a significant problem. During the breeding season male Major’s can become very aggressive to any humans who enter their aviary, and they often do not tolerate nest inspections.Two or three, rarely four eggs are laid, with incubation by both parents taking around 25 days. The young fledge after 7 to 8 weeks, and are fed for a further 8 weeks by the parents. They should be removed from their parents by 6 months old, and birds are mature enough to breed at 3 to 4 years, although breeding success may often take another year or two.

A varied diet is required, with a good quality small parrot mix being supplemented by large amounts of fresh fruit and vegetables. Some meat such as cooked chop or chicken bones is important, especially during the breeding season. Eucalypt branches or pine cones are an important factor in relieving boredom.

The Major Mitchell is quite often kept as a pet bird, but is one of the less suitable cockatoo’s as a pet. While they are delightful when young and hand raised they often become aggressive as they mature, and many end up as only suitable for an aviary. If a bird is to be kept as a pet, it will need some firm handling to stop it becoming dominant as it matures. It is also a destructive chewer, and has a very loud “shout” at times.

A pair of Major Mitchell’s sell for around $700au in Queensland, while a hand raised young pet bird is around $500 au.