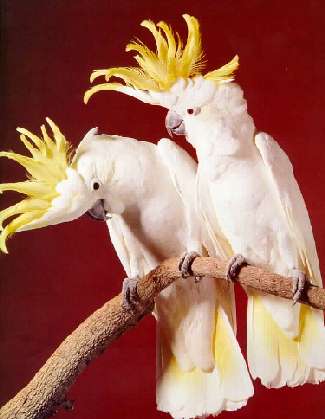 The Sulphur-crested Cockatoo is monomorphic when young, but females may develop a lighter eye colour at around 8 or more years old.

Four subspecies are recognised, only two of which are native to Australia. These are the nominate subspecies, Cacatua galerita galerita, which is found in eastern Australia and is the one most common in aviculture, and C. g. fitzroyi, from northern and north-western Australia. C. g. galerita varies from fitzroyi by having a white eye ring rather than pale blue, by having a paler yellow colour to the ear coverts, and by having shorter crest feathers. The other two subspecies are Cacatua g. triton and Cacatua g. eleonora, which are only found in Indonesia and Papua-New Guinea to the north of Australia, and are not considered here.

The Sulphur-crested Cockatoo is one of the icons of Australia’s birds, instantly invoking images of the Australian bush. It is a common and widespread species, extending from Tasmania through Victoria and New South Wales to the northern most tip of Queensland, and though the northern part of the Northern Territory into the Kimberly area of Western Australia. Introduced populations are established near Perth, in Western Australia, and in New Zealand. The two Australian subspecies meet around the Gulf of Carpenteria, in northern Queensland, where their ranges overlap The species is gregarious, often forming flocks of several hundreds. although when foraging for food these large flocks will often spilt into small groups, coming together again at the evening roost site. Feeding is often done on the ground, and in such situations some of the flock will be sentry birds in trees, and alert the flock if danger approaches. When flying as a flock they will frequently call out with a loud raucous screech; the noise from a flock of several hundred can be deafening. Their food in the wild is dominantly seed, nuts and fruit, and they can cause major damage to cultivated grain crops. For this reason the bird is regarded as a pest species in many parts of its range, and licensed culling is permitted in certain states.

The breeding season extends from August to January in the south and May to September in the north. A deep nesting hollow, high above the ground, is preferred, with 2 or more rarely 3 eggs laid. Incubation is by both parents and takes about 30 days and the babies fledge in about 70 days.

The Sulphur-crested Cockatoo, while very commonly kept as a pet, is unfortunately relatively rare as an aviary breeding bird in Australia. This is in large part because of the depressed effect on the price of any progeny caused by the ready availability of legally wild caught young birds. An aviary at least 5 metres by 1.2 metres by 2 metres high is needed, constructed of materials to withstand the inevitable chewing that will occur. A hollow nesting log over a metre long and about 35 cm in diameter should be supplied. An essential requirement is to keep a constant supply of fresh branches of eucalyptus and other native trees available to avoid boredom. The mate aggression that can be a problem with some species of cockatoos seems to be rare in Sulphur-crested. The diet needs to be varied, balanced and interesting. A variety of seeds such as wheat, hulled oats, canary, and some grey striped sunflower, should be provided as well as a wide range of fresh vegetables and fruit. Animal protein is also beneficial, given by way of chicken or chop bones, mealworms or other grubs. A tendency of the species to become overweight should be guarded against, and there are arguments for the use of pellets rather than seed for the Sulphur-crested.

The Sulphur-crested Cockatoo can make an excellent pet, with even wild caught young birds capable of becoming affectionate and friendly birds. They do have a tendency to bond to only one person, often becoming aggressive to others. They are highly intelligent birds, which, like most cockatoos, need constant stimulation with toys and objects to chew to keep them from getting bored. They are not generally noisy, apart from early morning and evening, although some are the exception to the rule and can drive one to distraction with their loud screeching through the day. Both sexes can become good talkers, possibly with the males being somewhat better.

A wild caught young bird can be obtained for under $100au in Queensland. However because of the potential disease problems (particularly Psittacine Beak and Feather Disease) of wild caught birds, aviary raised birds are more expensive and a hand raised, aviary bred bird certified free of PBFD can fetch up to $500.