What could be the perfect cockatoo for you? It is a big question because there are many members of the cacatuidae family. But, if you want one that’s quite particular, why not try the Yellow-tailed Black Cockatoo?

A rather peculiar aspect

It is known as the Yellow-tailed Black Cockatoo, although experts often refer to it as Calyptorhynchus funereus. It was first described by the English naturalist George Shaw, who at that time baptized it Psittacus funereus because of its dark and sombre plumage, but later it was renamed, around 1826. 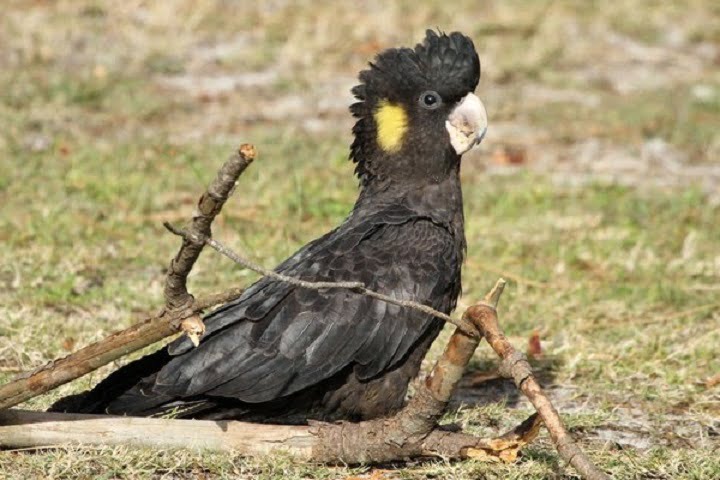 It can live in a wide variety of habitats, from forests to heathlands to pine plantations and has sometimes been seen living in urban areas as long as food is available, such as in the suburbs of Sydney. It is mainly found in Australia, especially on the island of Tasmania, although some species have also been seen in other countries as they have been imported by breeders who wanted to achieve reproduction.

It is a bird that can measure between 55 – 65 centimeters in length, depending on whether it is male or female. It has a short crest on the top of its head, known as a tuft, which is very common among the cockatoos of the calyptorhynchus family.

What stands out the most is the black-brown color of its feathers, which is why it was baptized as a funembre cockatoo. But on his face he has yellow patches on his cheeks and his tail is yellowish in tone, adding to a yellow border on his feathers, which gives him a rather curious wavy appearance to his eyes.

Its beak is small and wavy and has a grayish, bone-colored hue, as does its feather-free potatoes. Both legs and feathers are used to climb up tree branches with great agility.

Within this species a total of two subspecies are recognized:

Although for some it does not exist as such, there are many experts in poultry farming who have determined that there is a third subspecies, which is known as Calyptorhyunchus funereus, a daytime and quite noisy species, which makes it easy to detect when they are traveling, as it is a very migratory bird.

It’s the one I’ve always wanted, but can I take care of it?

It is not a bird that is in danger of extinction, although, unless you buy it from an expert seller in the West, you do need special permits to import it from Australia, and pass some habitability controls for this bird.

It needs a cage large enough to stretch its wings, at least 4x2x2 meters, and this has to be located in an area where the bird does not get direct sunlight but can receive enough natural light. In addition, unlike other cockatoos, their diet consists mainly of worms and seeds. This doesn’t mean you don’t have to give them some fruit or vegetables every now and then to get the best nutrients.

It is a very long-lived bird, being able to overcome the 40 years as long as it is well cared for. Their reproduction has to be done by experts, as they are birds that usually breed at high altitudes and it is very difficult to reproduce the ideal conditions for this inside the cage.

Their behaviour towards humans is not usually problematic. It is a loving bird when it has gained confidence and can be trained as well as a dog as they are quite intelligent. However, be careful not to choose the noisiest species of this bird, because its sounds can be quite annoying in a house.