Have you just discovered the wonderful world of kingfishers? Well, today we’re going to talk about a very special one: the Green-and-Rufous Kingfisher! It will make you fall in love with this species and want to know more about the rest of its relatives!

This species is known scientifically as Chloroceryle inda, a species of Cerylidae bird that usually lives in the lowlands of the American tropics. It extends from the southeast of Nicaragua, to the south, to the south of Brazil.

It usually lives in very swampy areas, although it can also be found in forest streams with a lot of vegetation. It is also common in plantations and mangroves.

The Green-and-Rufous Kingfisher measures from 21 to 24 cm, weighing about 60 grams. It presents a slight sexual dimorphism.

The male is metallic green in color, in very dark tones, in the upper parts. It has fine white spots and ruffles on its wings, as well as on its tail. Its beak is black, except for the gonium, which is flesh-colored.

Your cheeks and throat have a suede color, which changes to a deep rhubarb in the lower region of your body. It has a somewhat narrow rufa list in the loreal zone, as well as on the nuchal neck. The female, on the other hand, has a dark green pectoral girdle, sprinkled in white. 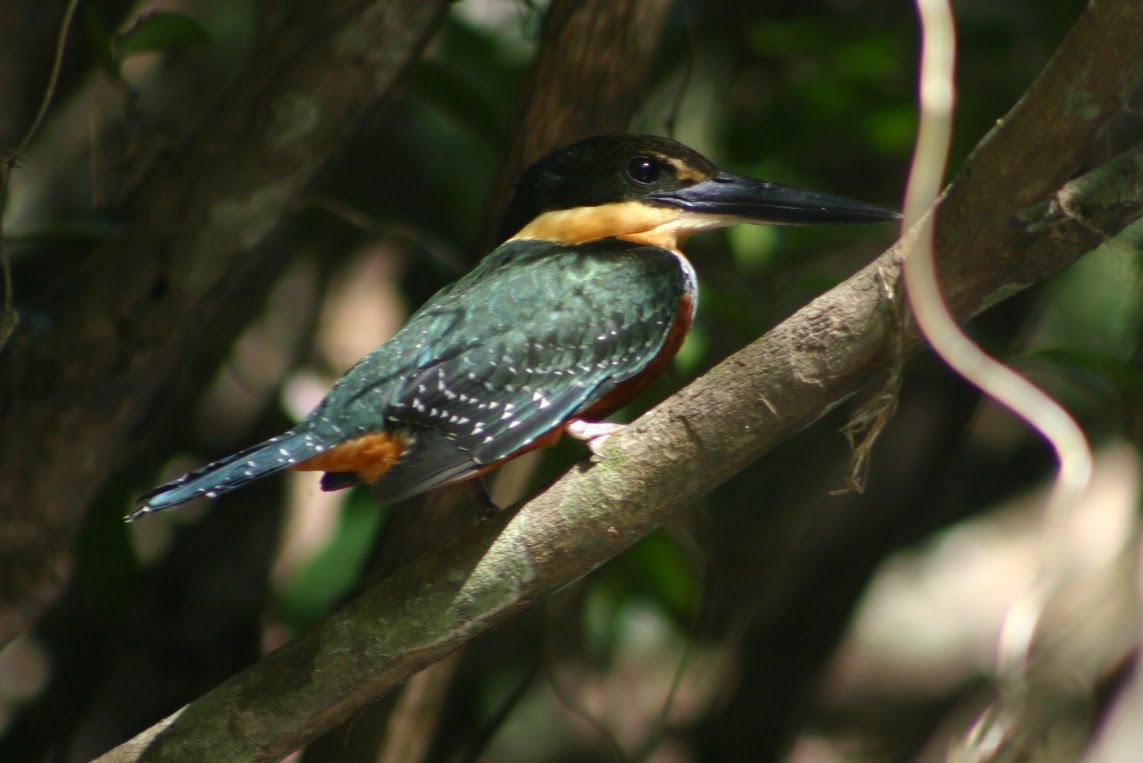 Two subspecies are known to him:

What do they eat? How does it live?

He’s not much different from the rest of his family members. Their diet consists of fish (small or medium sized), crustaceans and some aquatic insects. These foods are hunted on the fly, and they can be submerged and emerge at an incredible speed. Some prey, if small, can be eaten on the fly.

The nest consists of a tunnel, which ends in a large chamber, which is built near the edge of a river. Inside, and after the breeding season, the female lays three to five eggs. She will be in charge of incubating the eggs, while the male will be in charge of watching the entrance and preventing any predators from approaching.

The chicks take about a month to hatch. They depend on their parents until they are almost one month old, but they do not leave the nest until they are two months old. They tend to learn from parents how to get their food. Something that is costing many people their lives because of their inexperience.