Very difficult to visually sex, female tends to be somewhat duller in colour. Surgical or DNA sexing is usually necessary.

The Purple-crown Lorikeet inhabits mainly open woodland, mallee and coastal heath in its eastern area, and forest areas in the west. It has also adapted well to suburbia. Like other lorikeets, it can congregate in large numbers when suitable flowering shrubs and trees are available, and flocks numbering in the hundreds are not uncommon. It is at times a pest of commercial orchards.

The Purple-crown Lorikeet is kept in moderate numbers in Australian aviaries and in recent years has become a prolific breeder. It is a peaceful bird, and can be housed quite successfully in a planted aviary with finches. For breeding purposes, a suspended aviary 2.7 by 0.9 by 0.9 metres is adequate, and even large cabinet breeding can be successful. Pairs often form a tight pair bonding.The diet is typical of Lorikeets, as covered in the introduction to the Lorikeets. 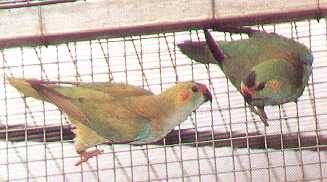 A nest box similar in size to a budgie box, about 20 cm on each side, is adequate, preferably with a spout entrance. Sawdust or wood shavings are preferred as nesting material, and regular cleaning of the box is needed while chicks are in the nest. Three to four, rarely five, eggs are laid and incubation, mainly done by the hen, takes about 21 days. The babies leave the nest at about about 7 weeks and are independent a couple of weeks later. They are mature enough to breed at 12 months but have been reported as breeding at 6 months.

A cinnamon mutation appears to be the only mutation recorded so far for the Purple-crowned Lorikeet.

They are not usually kept as pets in Australia, but from their aviary behaviour I would expect them to make an excellent pet.

A breeding age pair can be purchased for around $200 in Queensland, and a hand raised young bird for around $150. They are almost unknown in aviculture elsewhere in the world.