The Rainbow Lorikeet is widely distributed along the coastal strip from Cape York south to Victoria and into South Australia. It is often abundant from Sydney northwards, but is becoming rarer south of Sydney. An increasing population around Perth, in Western Australia, is thought to be derived from escaped aviary birds. The prefered habitat is coastal forests as well as urban gardens. Noisy flocks of up to several hundred may congregate in flowering trees to feed and roost, at times in the company of Scaly Breasted Lorikeets. Breeding in the wild is from August to January.

The Rainbow Lorikeet is one of maybe 18 to 20 subspecies of T. haematodus, a complex which is widely distributed through the southwest Pacific islands, Papua-New Guinea and Indonesia. 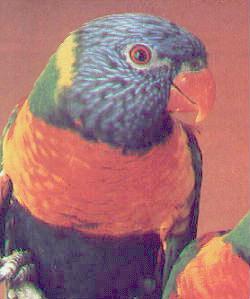 The Rainbow is easily the most popular lorikeet kept in Australian aviculture, and breeds freely. Housing is best as a single pair to a flight, since they can be quarrelsome in the breeding season. Suspended aviaries around 3.5 metres long are the prefered accomodation. A 30 cm by 30 cm by 45 cm high nestbox can be used, and the usual precautions for keeping the Lorikeet nestbox clean are required. Two eggs are laid, and incubation by the hen takes 24 days. The babies fledge at around 56 to 60 days, and the young become independent after a further 14 days. Double or even triple brooding is likely, especially if babies are removed for hand rearing. Sexual maturity is at 18 to 24 months.

Several mutations of the Rainbow Lorikeet have occured. An Olive form has been produced by cross breeding with Olive Scaly-breasted Lorikeets, and then breeding back to Rainbows, but is not common in Australian aviculture and is not a true mutation, being derived by hybridization. Both Cinnamon, Blue-breasted and a full Blue mutation have been reported.

The Rainbow is a popular pet bird in Australia, with probably several thousand being sold each year. Even if not hand reared, a young bird will rapidly become very tame, and be a constant source of amusement. They are constantly playing, with behaviour at times more reminiscent of a kitten than a bird. One of their favourite tricks is to go to sleep lying on their back with feet up in the air, looking rather dead, until the sceam of horror wakes them up and they bound to their feet!

A mature pair in Queensland will sell for around $90AU, with a hand raised bird being about $125AU. They are present in overseas aviculture, but I am unaware of their price in the USA or Britain.