Visual sexing is unreliable,so surgical or DNA sexing is necessary.

The Scaly is found along the east coast area of Australia from Sydney in N.S.W. to Cooktown in northern Queensland. Over much of this range it is common to locally abundant. It is a gregarious species prefering the open forest, often travelling in large flocks from tree to tree in the company of Rainbow Lorikeets. It is common in urban areas, taking advantage of any nector bearing garden plantings, especially Grevilleas. The breeding season in the wild is from May to December.

The Scaly Breasted Lorikeet is a commonly kept species, and is a free breeder in captivity. It can be housed in a colony setup but best results are gained from housing one pair per flight, with suspended aviaries being prefered. The Scaly can almost be regarded as a domesticated bird in aviculture with the breeding season extending from March to December, and double or triple brooding not uncommon, especially if babies are pulled for hand rearing. A standard 20 cm by 20 cm by 30 cm high nestbox can be used, and the usual precautions for keeping the Lorikeet nestbox clean are required. Two eggs are laid, with rare reports of three eggs, and incubation by the hen takes 22 days. The babies fledge at around 56 to 60 days, and the young become independant after a further 14 days. Sexual maturity is at 18 to 24 months. The diet is typical of Lorikeets, as covered in the introduction to the Lorikeets. 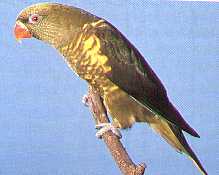 Several mutations are known for the Scaly.

The Olive Scaly-breasted mutation is a dominant mutation which is well established now in Australian aviculture.

The Yellow mutation (presumably lutino mutation) of the Scaly-breasted Lorikeet appears very rare, and I am uncertain if it is properly established yet in Australian aviculture.

The Blue mutation is extremely rare, and I am uncertain if any currently exist in Australia. I apologise for the quality of the image of the blue mutation, it was the only one available, but is of sufficient interest to be worth showing here.

Both a jade and a cinnamon mutation have been reported but no photos of them are available to me, and I am uncertain if they are still in existence at the present time.

The Scaly is a common pet bird in Australia, with many hundreds hand reared each year. It is a delightful pet; affectionate, playful, and not noisy. Some have become extremely good talkers. Their only disadvantage is that shared by all lorikeets – loose, sticky droppings as a result of their diet.

The Scaly-breasted Lorikeet is the cheapest of the Australian Lorikeet, with a mature pair of normals selling in Queensland for around $75AU. Hand reared young birds can be obtained for a similar figure. The Olive Scaly is also quite cheap, probably around $250AU a pair. The species is extremely rare outside of Australia, and overseas pricing is unknown.