Little or no difference between sexes. Female may be somewhat duller in colour, particularly on the head, but this is not very reliable. Surgical or DNA sexing should be used to confirm the sex of pairs.

The Musk Lorikeet inhabits mainly Eucalypt forests and woodlands in coastal areas from Southern Queensland, through New South Wales and Victoria to South Australia. Common to abundant in the south, but rare north of Sydney. It can occur in flocks of several hundreds around stands of flowering trees. In general the Musk Lorikeet relies on flowering native trees and shrubs for food, but can be a pest in commercial orchards and will sometimes eat half-ripe grain crops. Breeding is mostly August to January.

The Musk Lorikeet is kept in reasonable numbers in Australian aviaries but has a reputation for being fairly difficult to breed. It is a peaceful bird, and can be successfully housed in a large well-planted aviary with finches, doves and Neophemas. It appears to exhibit no aggression, even during the breeding season. However better results would probably result if they were kept as individual pairs in large suspended flights. Pairs can form very tight bonding.The diet is typical of Lorikeets, as covered in the introduction to the Lorikeets.

The nest box can be about 20 cm by 20 cm and 40 cm deep, with a 7 cm opening. Sawdust or wood shavings are the preferred nesting material, because of their ability to absorb the runny droppings. However it will usually be necessary to clean out the box and replace the nesting material several times while the babies are in the nest. Incubation of the 2 eggs takes about 24 days, the babies usually leave the nest at about 45 days, and are independent after a further 10 days. Sexual maturity is at 12 months.

There appear to be no natural mutations of the Musk Lorikeet, however an Olive Musk has been developed by crossing with Olive Scaly-breasted Lorikeets. 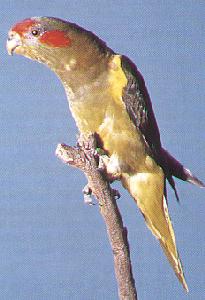 The Musk is kept in very low numbers as a pet in Australia. Like most other Lorikeets, government regulations, with an annual licence fee to keep a native bird, means that most potential owners are discouraged from buying them. They do however make a most delightful pet, quieter than the Rainbow, but almost as playful. I am uncertain of their ability to talk, and would suspect that it is not likely to be as good as the Rainbow, Red-collar and Scaly.

The Musk Lorikeet sells for about $75au each in Queensland. A hand raised bird would cost around $100au. It appears to be extremely rare in Europe and America, and a pair reportedly sells for about $900 (U.S. funds) in America.