I’m sure you’ll find this macaw very interesting, especially because of the curious name it gets for “military macaw”. Isn’t that rather curious?

What about the military macaw?

The ara militaris is commonly known as the green macaw because of its greenish plumage. It belongs to the parrot family and its population extends from Mexico to northern Argentina.

Unfortunately, the populations of this bird are rather fragmented, which is why the species is considered to be in a vulnerable situation, despite the fact that there is a wide variety of specimens among the different populations of the military macaw.

It is not one of the largest specimens, as it measures an average of 70 centimetres and weighs between 900 and 1,100 grams. It does not have sexual dimorphism, so it is very difficult to differentiate the male from the female despite the fact that the female tends to be thought to be much smaller than the male. This has been indicated by many breeders who are engaged in reproduction but which is not considered a valid system for determining the sex of the specimen.

The predominant color in their feathers is green, but the back of the neck, back and feathers are blue while the outer bands of the primary feathers are metallic blue. Its tail is long and pointed, reddish-brown with blue ends at the bottom. The wing feathers are olive yellow in colour. It has a curious red frontal patch with a white hue in the bare area of the face, which is furrowed with fine black lines under the eye area and brown feathers in the throat area. Your child’s iris is yellow, while his beak is completely black and his legs are dark gray.

A total of three subspecies have been recognized:

Is it possible to keep it as a pet?

Although it is a species that is listed as vulnerable, the fact is that it is not too difficult to find some specimens in shops. However, in some countries they have taken their protection very seriously, so it is forbidden to keep them as companion birds without having some special permits, such as breeding them.

This is a large bird, so it needs a large cage, so it is not recommended to keep it in flats. In addition, the cage must be located in a place where it is not directly exposed to the sun and cannot be vulnerable to draughts, as although it is a bird accustomed to temperature changes, it can catch a cold if it receives daily draughts. 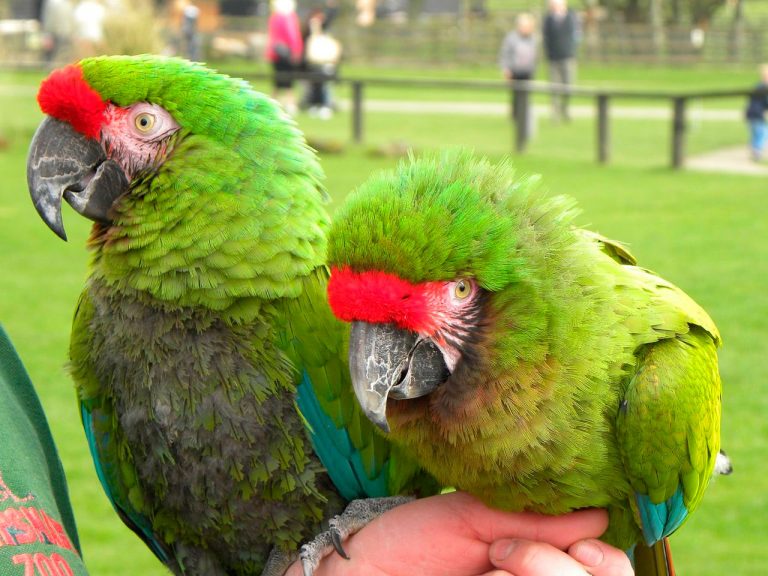 Their diet is mainly made up of nuts and dried fruit such as walnuts or peanuts, but it is also good to eat pieces of fruit or vegetables in summer, as this helps you to hydrate yourself. In addition, soft food is a very important part of your diet. You can give him the whole piece and have him break it up himself to eat it or give it to him in pieces. Do not overdo it with soft food, as this makes you susceptible to diseases such as diarrhea. In addition, it is important to clean your cage from time to time to avoid the appearance of bacteria and larvae in your environment that can cause a deadly disease.