Ready to immerse yourself in the exciting world of birds? You may have heard of the nightingale species, but have you ever heard of the Bluethroat? It’s one of the best of its kind!

It is known scientifically as luscinia svecica and is distributed from Scandinavia to Asia. Some specimens can even be found in Alaska, as well as in Central and Western Europe.

It is a migratory bird, so it is not uncommon to see it during the winter months in southern Spain and Italy, as well as in other warmer countries in South Asia, such as India, and in some parts of North Africa.

The size is very similar to robin, with a size between 13 – 14 cm and weighing about 20 grams. Presents a slender figure when standing. Its legs and beak are quite thin, with a dark grey colour. His eyes are black.

As its name suggests, it is characterized by a blue stain that runs from the throat to the chest, which can sometimes also have a white stain in the center. This varies by subspecies. It ends in a strip of very thin black feathers and a more extended strip in the belly area which is orange in colour.

This fringe is a sign of sexual dimorphism, as females have a less conspicuous one. The rest of the plumage of its body has whitish and yellowish areas, and is usually much more differentiated. The head is dark brown, like the back and wings, which are slightly lighter than the head. The tips of the tail are black, while the tops of the tail are orange or orange-red.

Although it is known as the Bluethroat, many prefer to call it by the literal translation of its scientific name: Swedish nightingale. According to the experts, there are a total of 11 subspecies, although many argue that the small differences between them are not sufficient to classify them as “subspecies” and are in fact the same with minimal differences.

The subspecies of the bluethroat are:

The difference between the different subspecies is found in the amount of blue they have in their throat, which is why experts consider them to be the same species.

What else can you tell about this wonderful bird?

It is a species that feeds on the insects it traps, generally in clearings and innkeepers in frosted areas. It feeds especially on coleoptera, aquatic insects, diptera, lepidoptera and some larvae. Occasionally it can feed on wild shrubbery fruits and during the autumn month on some seeds.

When it is time for reproduction, they build their nests on the slopes of mountain ranges and mountains, in areas close to where there is water to get their food, in the dense vegetation. Laying usually takes place during mid-March, with about 5-7 green eggs with a bluish hue with some spots of red speckles. The incubation, carried out jointly by the father and mother, lasts two weeks. When the chicks hatch, it takes one month for them to leave the nest and start flying. 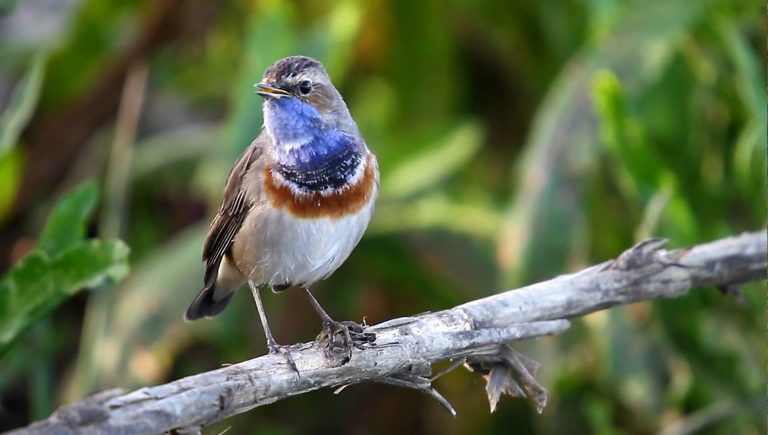 According to data from BirdLife International, in the year 2000 there were between 880,000 and 2,400,000 pairs. In Spain there could be around 12,000 copies according to a 1997 study. This number increases during the winter months. Since they have become very well accustomed to human contact, it is not uncommon to see this bird living near cities, especially in parks, but most commonly found in high mountain areas, especially during the breeding season. Sometimes they can nest in gardens or even on rooftops.