Maybe one of your dreams is to have an owl as a pet. However, not all birds of this species can be kept in a cage. This is the case of the northern spotted owl, a bird protected by government organizations.

One of the best known birds in the USA

It is generally known as the Californian tawny owl, but it is also known as the Brahman owl. However, the name that has most transcended this species is the Northern spotted owl, as it is found in North America. 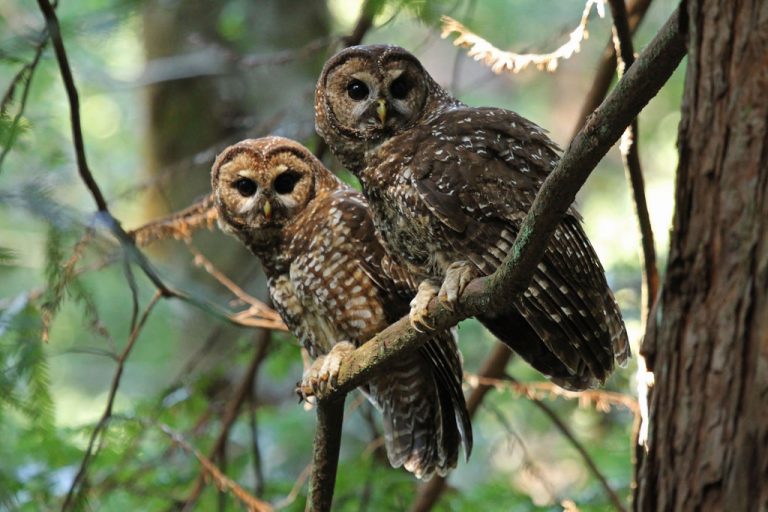 It lives in the forests of western Europe, where it nests in tree holes or cracks. He usually looks for old bird of prey nests, which he can be sure of.

Could you recognize it easily?

It is a large bird, as it can measure up to 43 cm. There is no sexual dimorphism that can help differentiate the male from the female, although it appears that this is a little larger than the male.

The reason it is called “stained” is because it has several shades of light and dark brown, intertwined with areas of white and cream, which gives it an amazing appearance. Around his eyes, he also has white spots, which give him a distinctive look. Large brown eyes, unlike the yellow color of other species.

It has three subspecies:

The species is classified as endangered and is protected under the U.S. Department of Fish and Wildlife’s Endangered Species Act. It is a species that is rapidly declining in population, by almost 7% per year. Only about 30 breeding pairs remain in British Columbia. According to experts, this species could become extinct in Canada in the coming years.

As far as their behaviour is concerned, they are a species very dedicated to their environment, and are very loyal when it comes to establishing their home; they are very aggressive in defending it, so they can attack both potential human and animal invaders. They do not migrate during the winter months and do not usually migrate far from their nest to forage.

He’s a great hunter, helping you hunt from small rodents to reptiles, flying insects and some squirrels. They may also be able to eat small birds and some of these young. They need a lot of food on a daily basis, but because of their increasingly reduced habitat, they find it difficult to get food.

Its flight pattern turns out to be very unique, as the movement of its wings is fast to gain speed. However, when they go to hunt their prey, they slide down to the right at the top of their prey.

After mating, which takes place between February and March, the eggs are usually laid in June, which can be up to 3. The eggs take 30 days to hatch, at which point the male begins to hatch for food to feed his family until their young are old enough to fend for themselves.