Maybe you’ve ever met the Tropical Screech Owl and you haven’t noticed. How would you like it if you could recognize him next time you saw him? That’s easy! Take note of this information and next time you will recognize it instantly.

Which way does this species live?

This species belongs to the family of strigidae and is native to Guatemala and Mexico. Its natural habitat includes subtropical forests and humid montane forests. It has recently lost some of its habitat and is in a vulnerable state.

Any peculiarities in his appearance?

The adult specimens reach a maximum of 20 cm in length, the smallest being 16 cm. Its weight is usually around 70 grams. Compared to other specimens, the tufts they have in the ear area are very small. There is no sexual dimorphism between male and female, although this is a bit larger.

The face is a little light with a fine dark border. The color of its plumage may be light brown or reddish brown. The upper part of the body has brown, black and white spots. These spots on the upper mantle are white. The shoulder feathers are black in the fringe area, whitish in colour.

The chest has a wide brown band and a yellowish-brown band. Its belly is white with blackish stripes on the axles. The wings extend beyond its tail, which is quite short. Their beaks are grey, while their eyes are a strong yellow colour.

Is the situation of the species that bad?

The species is currently in a vulnerable situation. Although the main reason this species is in this situation is because they have lost much of their habitat, the fact that it has been poached for many years is also a cause of the decline of individuals within the family.

It is a rather solitary type of bird, although it can live in small flocks with members of the same species. They usually nest in tree cavities, taking advantage of the nests of other birds or cavities that have been created by woodpeckers. 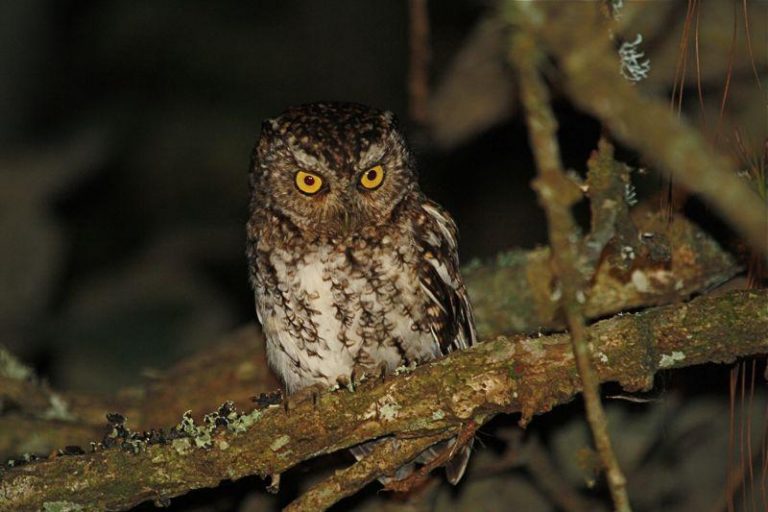 As it is a bird of prey, it usually hunts at night, but it can also hunt during daylight hours. It usually feeds on small mammals, reptiles and some invertebrate insects. In cases where this food is missing, it can attack the nests of other birds in search of chicks.