Never hurts to learn something new about other birds, doesn’t it? Especially when it comes to the turtledoves, which are one of the most wonderful birds that exist, such as the Ring-necked Dove. I’m sure you’re very interested.

Although it is better known as the collared turtledove, it is also known as the rosigris turtledove. The scientific name of this one is streptopelia roseogrisea, and it is a species that belongs to the pigeon family, endemic to Africa and the Arabian Peninsula. 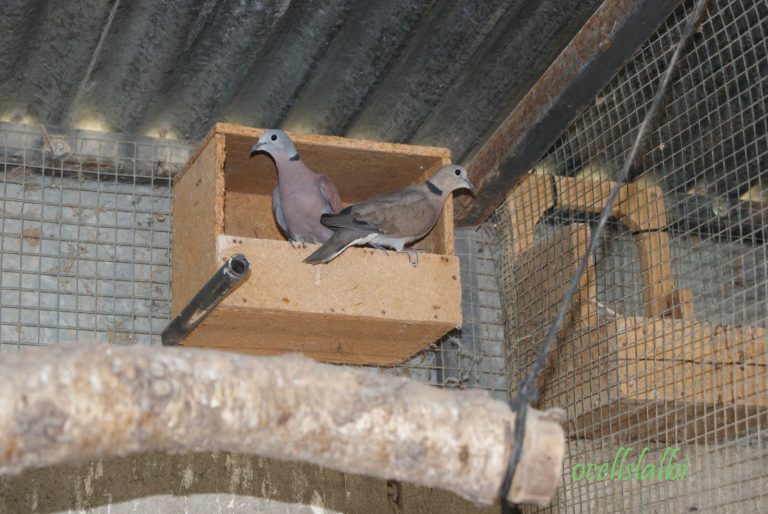 They generally live in semi-arid and arid areas, living up to 25 km from the nearest water reservoir, forming flocks with members of the same species that can be counted in their thousands.

Is it really that wonderful?

It measures between 28 – 29 cm and can weigh up to 140 grams. It is characterized by having a black necklace, bordered with white, on the neck, which is why it received this name. Its head is light cream with a pinkish hue, while its chest is creamy pink to white. Its beak is greyish and its legs reddish. Physically, it is very difficult to differentiate from the Turkish turtledove.

It can produce hybrids with the domestic turtledove and the Turkish turtledove. It is assumed that this species may also be a domestic species, but is more commonly used as a breeding bird than a pet bird.

It has been distinguished as a subspecies known as streptopelia roseogrisea arabica, which is the one that lives in the Arabian continent and is only slightly smaller than the nominal species.

It appears to be a bird with great colonizing potential, posing a serious threat to native species, habitats and ecosystems. In Spain it is considered an invasive bird and since 2013 it is prohibited to introduce it into the wild, possession, transport, traffic and trade.

What else is known about the species?

Given its great potential as a conquering bird, there are few places where its possession is not prohibited, unless it is to be kept as a pet or bird to breed in captivity. Since it is a bird that can reproduce with other birds of the same species, it is highly appreciated by caregivers.

Like the rest of the members of his family, his diet is made up of seeds and small invertebrate insects, and he can eat some leaf buds. Typically, she lives near growing areas where she can get food but can also be seen in areas of cities.

It is a bird that usually nests in large trees in order to keep it safe from possible predators. The nest and hatchery is taken care of by the female. Normally, they lay two eggs at each laying and the chicks take about two weeks to hatch. They will take another two weeks to have feathers and by the time they are 21-25 days old they will have left the nest.

Being a gregarious bird, it usually lives in large flocks, with which it only collaborates when it goes out to look for food in order to take care of each other. It is not uncommon for them to change the location of their nests, as they rarely use the same nest for another brood. In addition, they are a monogamous species that can be with the same partner all their lives, but it is not uncommon for them to have another partner in the next courtship season once they have reproduced.