Have you ever heard of the spotted dove and are you looking forward to learning more about it? Because if so, you will be very happy to read this article and learn about many curiosities of this species.

Where do you live?

Spilopelia chinensis, or spotted turtledove as it is more commonly known, belongs to the pigeon family and is distributed throughout the Indian subcontinent and Southeast Asia, reaching the smaller islands of the Probe.

Is it easy to recognize?

It has a length, from beak to tail, from 28 to 32 cm, depending on the specimen. Since there is no sexual dimorphism, some breeders have established that the female is a little smaller than the male, but in some specimens the opposite has been proven, so it is not a valid sex identification system. A DNA test must be used to determine the sex of the specimen.

The color of their feathers is a pink beige, with some shades of gray in the head and belly area. It has a list, which looks like a half collar, black on the back and sides of the neck, made with bifurcated black feathers and white spots on the sides. His back has brown feathers, with reddish spots. 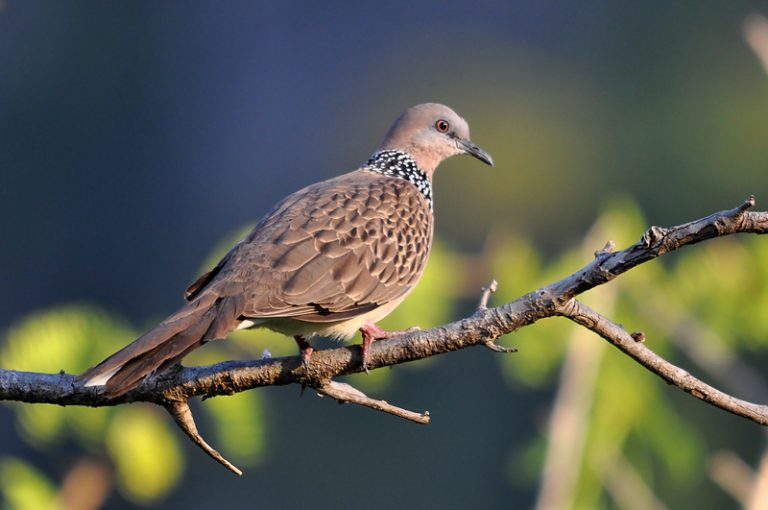 Several subspecies have been recognized, by variation in plumage and size, in different geographic populations, but there are many disputes about whether they are actually subspecies or not. The most famous is the one in Taiwan, known as Formosa, and is considered doubtful, although many consider it as such. The one that lives in India is known as suratensis, which is only found in Surat, and in Sri Lanka a so-called ceylonensis is recognized, but there are also many doubts about whether it is a subspecies or simply that it has been introduced.

Any other interesting facts about this bird?

It is a species that usually moves in pairs or small groups, feeding on the ground on grass seeds, grains, fallen fruits and seeds of other plants. But they’ve been seen eating some insects and winged termites before. They are quick to fly, with regular fluttering, and some occasional flapping of the wings.

Their breeding season is prolonged in the warm zones, while in the temperate zones this happens during the summer months. Hawaiian specimens, for example, breed throughout the year. Typically, they lay two eggs in a nest they place on the ground or in buildings or other structures. Both parents are involved in the incubation process and in caring for the young once they are born.

It is a bird that has become very accustomed to being in contact with humans, which is why it lives in cities where it can easily get food from parks or gardens.