Are they related in any way?

Like Gould’s diamond, this bird owes its name to ornithologist John Gould. It is known by the scientific name of selenidera gouldii, and is a species of ramphastidae bird of the genus selenidera.

It is located in the southeastern part of the Amazon, with a disjunct population in the Baturité mountain range, in Brazil.

Within the toucan family, this is one of the easiest to recognize for its fantastic color. Its size ranges from 33-37 cm, with the female being slightly smaller than the male and having a shorter beak.

Its beak is a mixture of colours, with the lower part white, the upper part black and the tip orange. The face has a green mask on both sides, with the nape of the neck and neck green, joined to a small yellow stripe that returns to the shoulder area. His chest is also black to the bottom, which is orange in color.

The sides of this bird are of an olive green that becomes a little darker in the area of the wings. The tips of the tail feathers are black. In the past, and because of their similarity, they were thought to be a conespecific of the maculated-billed toucanite.

It may seem crazy at first glance to have a pet bird like this, but it’s not impossible. In fact, in Brazil many people have this bird as a companion bird, being one of the most popular in the region. The motive? The beautifully colored feathers bring a lot of life to the home. However, its biggest drawback is that it can be very scandalous, which is not entirely pleasant when it comes to trying to sleep. 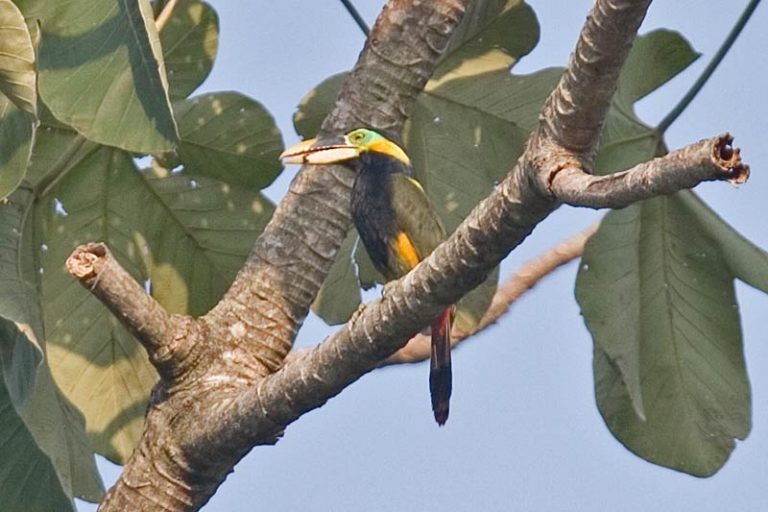 In the wild it is a bird that is always attentive to everything around it, always looking around for possible threats. Although he likes to live alone, he has no problem sharing the territory with other birds, even within his own species. Its reproduction usually takes place a little before the middle of June. Although the female will be the one looking for a cavity in which to lay the eggs, which are usually no more than four at each laying, the male will help her incubate the eggs and then care for the chicks.

When it comes to feeding, it prefers to eat fruits, which it can easily devour thanks to its large beak. But it can also consume small insects, some reptiles and even some small mammals.