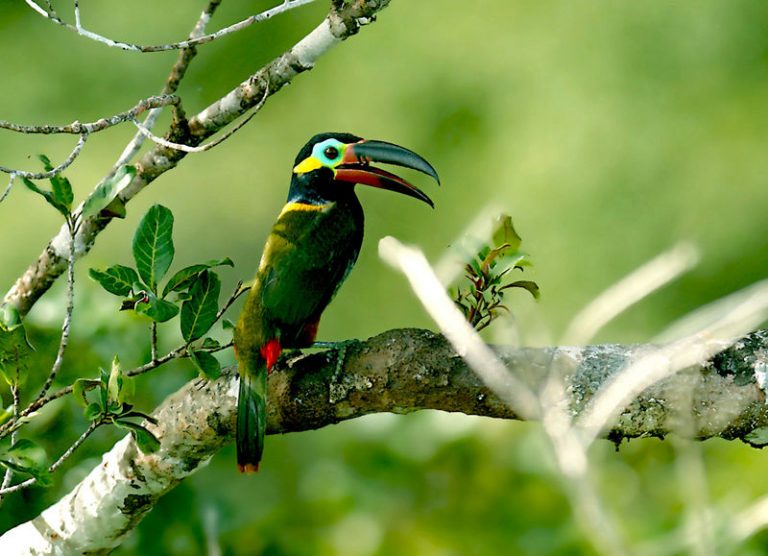 Come on, you still have a lot of birds of the toucan family to see. Today we are going to talk about the Guianan Toucanet, a species that in some countries of America is very well known and appreciated as a pet bird.

It receives the name of selenidera culik, and it is a species of toucan that lives in some countries of South America, presents in the forests of the Guayanas, reason for its name, in Venezuela and part of Brazil.

It lives below 900 meters of altitude, on the mainland of the rainforests and gallery forests, always on the treetops.

How about learning to tell the difference?

This species is a medium-sized toucan, usually between 30-35 cm in length. In some cases the female may be slightly larger than the male. It presents a slight sexual dimorphism, since the male has a black crown, nape, neck, throat and chest, while the female is grey, except in the area of the nape of the neck which is more reddish.

The color of its beak is red, with a black tip. In both sexes the back, belly, wings and tail are green, with the tips of the tail reddish in colour. It has a red underflow region. The auricular line is yellow and the skin around the eye is light blue.

Hard to see in freedom

Although there is a kind of widespread leftover, it is very difficult to see in the wild. The reason for this is because he likes to live in the interior parts of the forests, on the branches of the trees, and hide in their cavities to be safe.

However, in Venezuela it is highly appreciated in the world of poultry farming as a pet bird. This has caused it to spread to other regions like a bird that can be kept in a cage. However, it is accustomed to feeding on certain fruits, such as oenocarpus vacaba or cecropia, which makes it difficult to maintain in regions far from South America. Sometimes it also feeds on insects and other arthropods, which can be very expensive. However, it establishes a strong bond with its breeder and is a very loving bird.

When it lives in freedom, however, it is a much more solitary bird. It likes to live calmly in her cavity or to rest on the branches of the trees before going to look for food to check the environment, since she is suspicious. Very rarely does he move with other birds to get food.

It is only at the time of reproduction that it meets other members of its species. After mating, the female will be exclusively responsible for incubating the eggs and rearing the chicks.