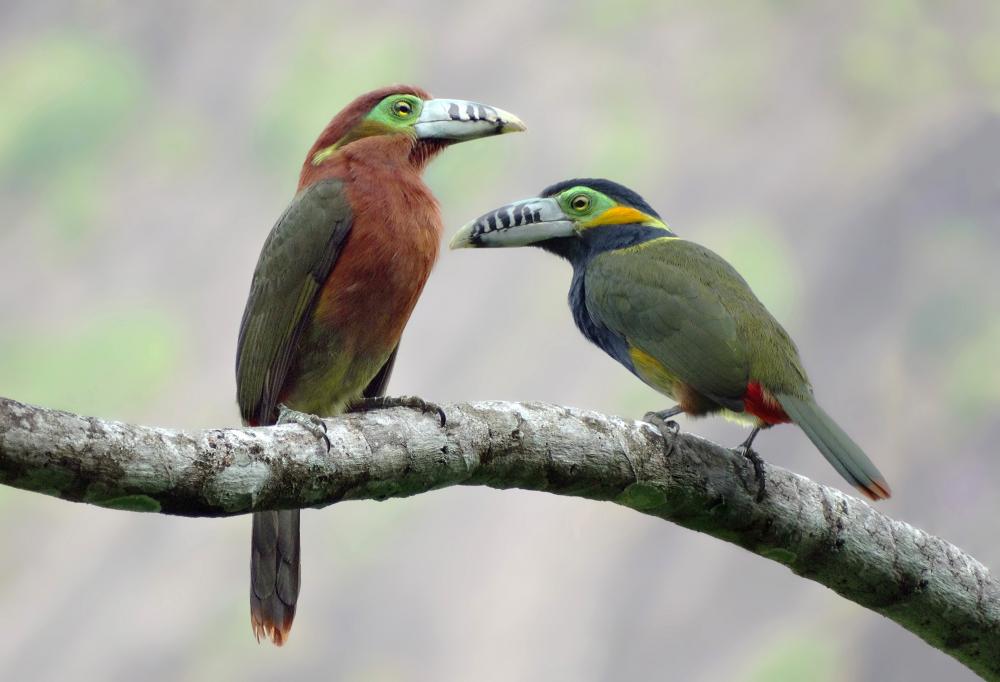 Would you like to have a toucan as a pet? It can be a very affectionate bird, but you know you’ll have to have a big cage or a lot of space to build a big aviary, right? Especially if you buy a Spot-billed Toucanet.

A kind of South America

Also known as the small arasari, and the scientific name of selenidera masculirostris, this species belongs to the ramphastidae family, in the genus of the selenidera.

It is native to Brazil, Bolivia, Paraguay and northern Argentina. When looking for a habitat, he likes to do it in the interior canopy and the edges of the humid forests.

It is a medium-sized bird, measuring between 33-37 cm, the male being slightly larger than the female and having a slightly longer beak.

The male has a black head, throat and chest, while the female has a brown to orange colour. The back in both sexes is olive green. At the peak it has three to five dark bands, which vary in format depending on the individual.

It has a green eye ring with a plume of post-ocular feathers and a line forming the letter ‘a’ in the never golden yellow. In addition, the yellow iris has a dark spot.

In some South American countries it is treated like a fairly common pet. In these countries it is heavily worked as a breeding bird, which has helped the wild population to expand and remain stable unlike other members of its family.

Its diet is composed of fruits, mainly cecropia and palms. From time to time you may consume sprouts and some types of insects, from which you get protein. Breeding can occur before summer, nesting in a hollow or cavity in a tree. It will lay two to four eggs that will incubate for about three weeks, alternating with the male.

When the young are born, they do not yet have the strength in their beaks to feed on fruit, so it is the parents who feed them. In addition, they compensate the feeding with some insects, so that they receive the necessary nutrients to develop.

Toucans are a species that have a very strong beak, so think twice before getting one. Whoever gets a kind of toucan as a pet must know that they will have to invest in a cage with very resistant bars and very thick, since these can break many materials easily with their beak. And in the case of having more than one, you should avoid having several males and females in the same aviary, since they will fight when the time comes for reproduction. It is best to have separate modules to keep couples calm.