Do you still have a little time to do some more research on another type of bird? We recommend Tawny-tufted Toucanet. What do you think of that? Ready to learn a little more?

Exactly where do they live?

It receives the scientific name of selenidera nattereri, and is a species of the family ramphastidae that lives in Central America, mainly in Brazil, Colombia, French Guiana, Guyana and Venezuela. It is also called toothed pichilingo, short-beaked tucancito or red-beaked tucancito.

Their habitat is usually areas of sandy soil and clearings within the rainforest, preferring the 160 meters of altitude. However, some specimens have lived up to 300 metres in altitude.

Learn to recognize it!

Within the toucan family it is a medium-sized specimen, measuring between 32 and 33 cm in length, weighing between 140 and 170 grams. One could say that it presents a slight sexual dimorphism, but not very pronounced.

The male has a black plumage, with skin around the eye from a greenish-blue to a bright yellowish-green color and a wide orange-yellow band behind the ears. In addition, it has a patch on the golden yellow franc, with a yellow band on the upper coat.

Their beaks are red and one of the shortest in the toucan family. As a general rule, female specimens of this species have much duller colors than males, which serves as a guide to distinguish them.

And what is his life in freedom?

The truth is that it is a specimen of which little is known about his life in freedom, since it has not been studied very much. Being such an unknown species, it has helped to keep it well protected.

It is known that he likes to live alone rather than in flocks, only getting together with other members of his species when it is time for reproduction. It often looks for hiding places in tree cavities, either natural or made by woodpeckers. 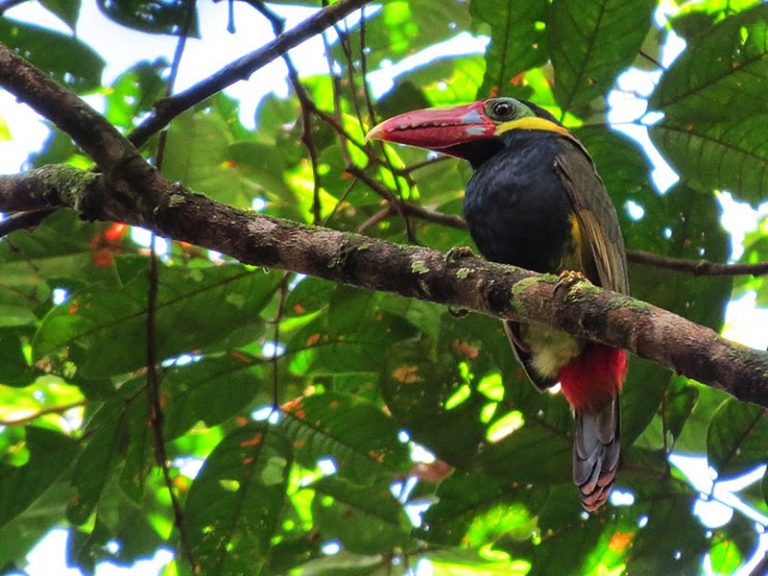 The courtship process seems to be after the rainy season, shortly before the summer. The female will be the one who looks for a place to lay eggs, taking advantage of the cavities or nests left by other birds. Once inside, he will put the holes in, resting one or two days between each laying, and incubate them for about three weeks. Although rare, on occasion the male may collaborate in this process.

Once the chicks are born, they will not leave the nest for the first time until they are two weeks old. The feeding of this bird is composed of fruits and some invertebrate animals. It may also consume small reptiles and other animals. In some cases, when their main diet is lacking, they may resort to the consumption of eggs of other species. It is not usually a violent animal, but the female becomes very aggressive when she lays her eggs.